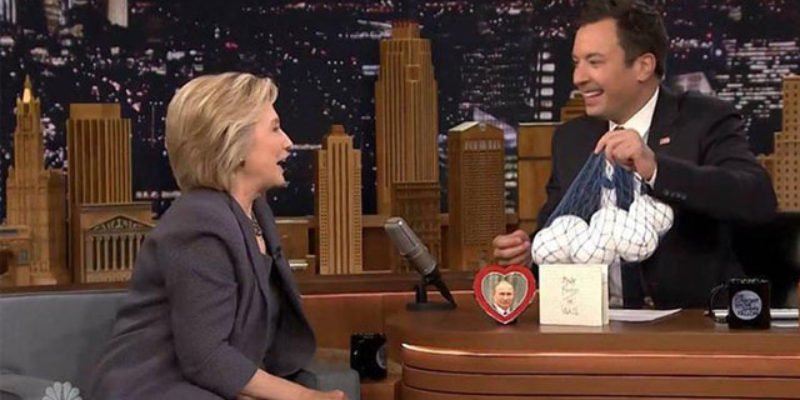 Not all that great, actually.

Jimmy Fallon had her on the Tonight Show last night, and she spent the time attacking Donald Trump – but in the process she more or less confirmed the perception she left with lots of people that she lacks empathy with those less fortunate than herself.

There was the stupid comment about the “basket of deplorables” a week and a half ago, implying that a quarter of the country are irredeemable and don’t qualify as Americans per Hillary’s standards. And then last night there was the flippant treatment of the homeless…

Hillary BOMBS Fallon: "It looks like a homeless person's". She has NO idea what it's like to be homeless; #Deplorable! #TrumpAQuote #Trump pic.twitter.com/oCvp5T8iMp

The joke is that the bag got left behind in Trump’s dressing room after his appearance on the show the previous week, so in effect she’s ripping Fallon for having Trump on and throwing him softball questions – as if Hillary Clinton has given a substantive, honest answer to a difficult question even so much as once in this entire campaign. Another candidate pulling a stunt like that could maybe make it funny; with Hillary it’s a bomb of a joke and just makes her look like a bitch. Fallon played along, but it still fell flat – as did her reference to Trump’s “bromance” with Vladimir Putin; there is no doubt Trump’s admiration for the Russian tyrant is a negative, but at least Trump isn’t responsible for taking bribes to let Putin get access to a quarter of America’s uranium supply.

As you can imagine, Twitter went ballistic about the homeless thing – and no, we’re not going to repeat a whole bunch of tweets trashing her for her insensitivity. You can imagine what they said.

It’s not that egregious a gaffe. But for the Democrat Party to insist that it’s the party of compassion and generosity, and that Republicans are the mean and awful people who would ignore the suffering of their fellow man, this is an interesting window into her character. She comes off as terribly insincere, petty and self-aggrandizing.

Or, if you prefer, pretty deplorable.

Later today we’ll hear something from her about how she’s devoted her life to helping the homeless, and certainly would never mean to insult any of them, and maybe for some entertainment value she’ll tout the work the Clinton Foundation has done in that regard – with the six percent of its budget which doesn’t go to paying the Clintons.

Interested in more national news? We've got you covered! See More National News
Previous Article Lectures And Lies
Next Article HITHER AND YON: So Far, JBE Is Above Water