On Tuesday, Jeremy Alford had the results of a poll on the Baton Rouge mayor’s race that had been conducted three weeks ago by the Citizens For A Better Baton Rouge PAC…

There hasn’t been an enormous amount of polling in the race, and this isn’t exactly an independent poll given that it was conducted for Bodi White’s political action committee. But as Remington Research is the firm we at the Hayride used for the Senate poll we released earlier this week, we’re going to go ahead and say that if these numbers don’t accurately reflect the state of the race they’re probably pretty close.

Particularly since most of the folks you talk to figure that this is going to come down to a Bodi White-vs.-Sharon Weston Broome runoff anyway, and that’s what this poll shows.

It seems the field is broken down more or less by twos: you have the two Republicans in White and John Delgado, the two Democrats in Broome and Denise Marcelle, the two independents/offbeat candidates in Smokie Bourgeois and Darryl Gissel; though Bourgeois is running as a Republican he’s really just in the race so as to harass Delgado, and then there’s everybody else, none of whom look like they’ll be a factor in the race.

And the independents/offbeat candidates aren’t all that relevant, although it’s not a bad bet that between them they could pull 15 percent of the vote in the primary or maybe more.

So what’s interesting about this poll is a couple of things. First, a 10 percent showing by Delgado is not overly encouraging for him – and events haven’t been kind to him since the survey was taken. After all, Delgado is the bar owner who sued the sheriff of East Baton Rouge Parish for imposing a curfew for a couple of days after the flooding in the Baton Rouge area; that doesn’t exactly smack of selfless leadership or personal sacrifice for the greater good (and I say that as somebody who was largely agnostic about the curfew). Bad optics.

And worse optics. This looked different a month ago… 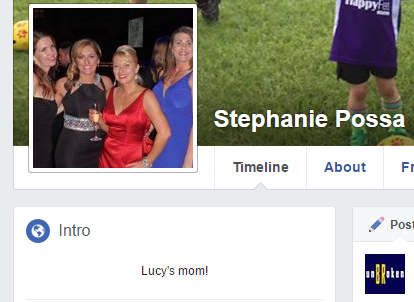 There used to be a Delgado on the end of that name. Now there isn’t.

Every political consultant in America will tell you that you can’t have that kind of stuff out there if you want to win an election. One wonders how Delgado expects to grow that 10 percent before November with his personal life in a state of disrepair – or even what he’s still doing in the race.

The other interesting takeaway from the poll is Marcelle’s 17 percent.

After Alton Sterling was shot by a Baton Rouge policeman, Marcelle did everything she could to make herself the Black Lives Matter candidate, only to see that gambit blow up in her face when a Black Lives Matter-inspired loon gunned down three local law enforcement officers and put another on life support. At that point, a lot of the thinking was that she was cooked.

And yet just three weeks after the cop-killing, she was still at 17 percent.

Which suggests, if these numbers are correct, that Marcelle presents a bit stronger challenge to Broome for the latter’s spot in the runoff than Delgado does to White. That isn’t a complete shock; White’s base of voters was always stronger than Delgado’s, while Marcelle has always seemed a little more able to make headlines than the relatively-reserved Broome.

But with only six points separating Broome and Marcelle, it’s not impossible Marcelle could close that gap given the right set of events between now and November.

White’s camp would much prefer a runoff with Marcelle, as her ability to attract crossover support from white voters is almost nil. Broome would stand to fare a little better. The voter registration statistics for East Baton Rouge Parish, updated yesterday, show the following racial breakdown…

You probably didn’t realize that white voters made up 52 percent of the vote in Baton Rouge, particularly based on the fact Kip Holden has won three comfortable victories as the city’s mayor since 2004, but it’s true. That means a black Democrat candidate has to pick up some percentage of white vote – around 10 percent should do it – in order to win.

Broome, who’s largely inoffensive in the way she carries herself and more or less a garden-variety liberal, though without the ability Holden has to make folks believe she’s a pro-business Democrat, has a shot to sway some white voters. Marcelle is like poison for them.

And it ought to be reiterated that the electorate for the runoff will look a lot different than the one in the primary. The primary election comes on November 8, the day of the presidential election. The runoff comes in December, and it will have a lot lower turnout – which generally means it’ll be an older, whiter, richer and more conservative electorate.

It’s tough to bet against Broome getting to the runoff, and a White-Broome runoff might well be too close to call at this point. The fact that Marcelle is hanging around, though, could make the primary more interesting than people think.