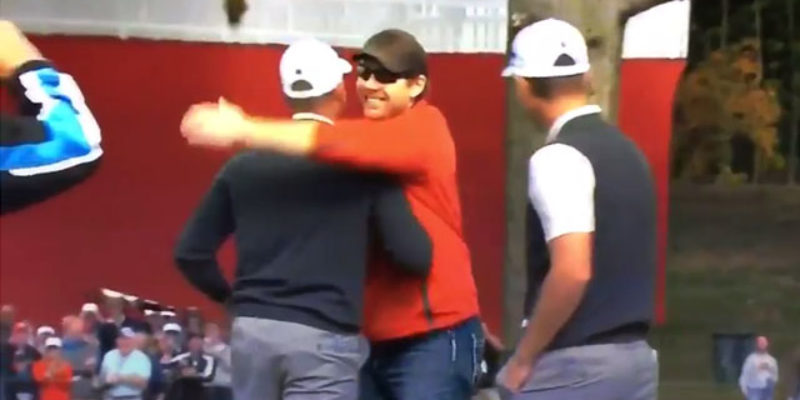 What are you watching? Well, the putter in question is a man named Dave Johnson, from Mayville, North Dakota. It’s OK if you’ve never heard of him; he’s not a celebrity. He’s a spectator who was in the gallery for today’s practice round of the weekend’s Ryder Cup at Hazeltine National Golf Club in Chaska, Minnesota.

Why is he on the green putting?

Because the European team had been struggling over that 10-foot putt you just saw for a while. Rory McIlroy and Andy Sullivan particularly had trouble with it, missing repeatedly. And Johnson, from the gallery, was having a great time heckling them about it. So fellow European team members Henrik Stenson, who goaded Johnson into coming down from the crowd to do it himself if he was such a badass, and Justin Rose, who laid down a c-note on the green next to the ball as a challenge, joined in to force the fan’s hand.

To which Johnson responded by sinking the troublesome putt and making off with Rose’s $100.

The Europeans were amused…

…but the piece de resistance was Johnson’s interview after sinking that putt. If this doesn’t put a smile on your face, nothing will.