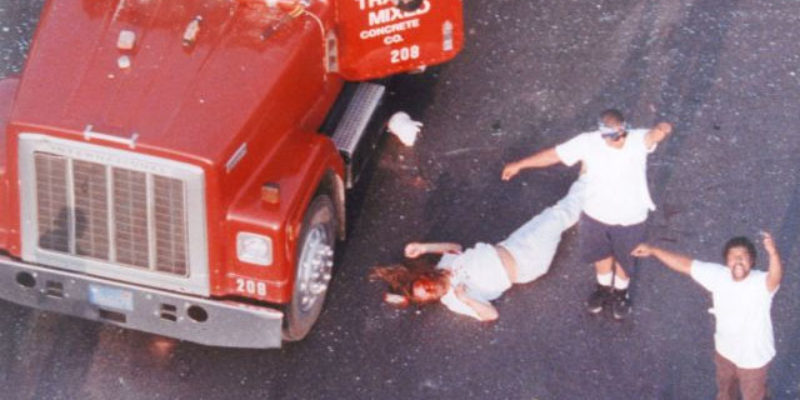 That chill wind you felt? It’s not autumn coming on. It’s something else.

Twitter has suspended the account of Glenn Reynolds, a University of Tennessee law professor and a contributing columnist for USA TODAY and the News Sentinel, after a tweet that urged motorists to run over demonstrators blocking traffic in Charlotte, N.C.

In response to a tweet from a TV news station in Charlotte that showed protesters on Interstate 277, the @Instapundit account wrote, “Run them down.”

Reynolds, the creator of the Instapundit blog, tweets from the handle @Instapundit.

Why did he make that tweet? It’s sounds so meeeeaaaaan.

“Yes, that was my post,” he wrote in the email. “It was brief, since it was Twitter, but blocking highways is dangerous and I don’t think people should stop for a mob, especially when it’s been violent.”

So for giving advice which, in a situation such as the rioters in Charlotte have created, is probably the best practical advice possible, he’s been silenced on the second largest social media platform on the web. This is somebody who has a weekly column at USA Today, but Twitter says he’s unacceptable.

Your author would likely have also been suspended from Twitter had the Black Lives Matter brigands made it onto I-12 and I-10 in Baton Rouge when they were attempting to turn protests into riots after the Alton Sterling shooting, because the advice would have been precisely the same.

From a post back in March at The Expired Meter, a site for motorists in Chicago…

8-Do not stop, always keep moving

No matter what you do, keep your vehicle in motion at all times. Once your vehicle is stopped the threat to you and your passengers increases dramatically.

The key is to drive slow enough to allow rioters to get out of your way and/or not injure anyone, but fast enough so no one can get on top of, or grab onto your vehicle or impede your car in any way. The last thing you want is a mob of people swarming over your car and stopping you from escaping or inflicting harm upon you and your passengers.

If someone tries to stop your vehicle by standing in front of it–do NOT stop. Slow down, but do not stop. In this situation just take your foot off the gas pedal and allow the engine to slowly push them out of  way.  Don’t accelerate erratically and strike the people blocking your vehicle. Instead nudge or push them out of the way as gently as possible. Again, the goal is to escape the situation safely without injuring anyone.

However, if the crowd begins to attack your vehicle and you believe you and your passengers are in imminent danger, then steadily increase your speed to the point where rioters cannot disable your vehicle and get out of there as quickly as possible. If it comes down to a choice of protecting your friends and family and striking a rioter–the choice is obvious.

As a motorist you are entitled to treat any mob of people blocking a roadway as a physical threat. You are under no obligation to allow yourself to become a Reginald Denny, the truck driver who found himself in the midst of the L.A. riots. Denny was pulled from his truck and beaten nearly to death, including having a cinder block dropped on his head.

Knowing all of this, and being a law professor at the University of Tennessee, Reynolds offered the advice not to stop on the interstate for a mob of “protestors” and if that means running some of them down so be it.

Perhaps the market should do to Twitter what it did to Target and what it’s beginning to do to the NFL.

Interested in more national news? We've got you covered! See More National News
Previous Article We Need To Talk About Policing And The Black Community
Next Article VIDEO: Have You Seen The NRA’s New Ad Hitting Hillary Clinton?