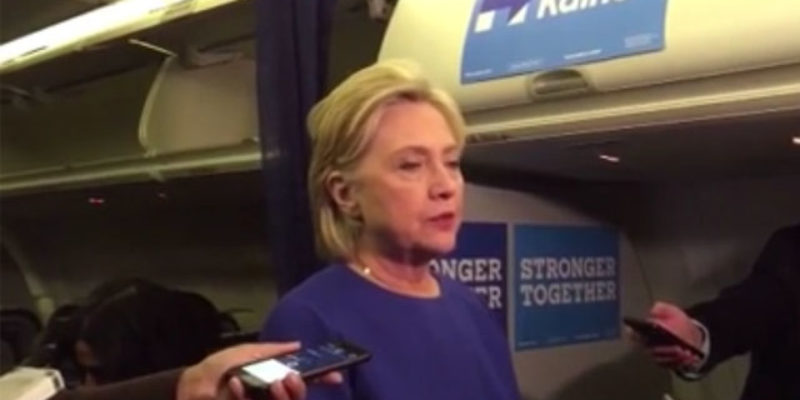 Not to make light of the thankfully poorly-executed terrorist attacks in New York, New Jersey and Minneapolis on Saturday, but this video clip of Hillary Clinton on her campaign plane babbling through a perfunctory statement of sympathy/political attack on Donald Trump doesn’t do a whole lot to engender confidence she’s up to the job of president.

Commentary of short duration after the clip…

First, either there was a lot of alcohol involved, or some pretty strong meds – because the woman giving that speech was not all there. Grabien, which has a little longer clip of her rambling about how Donald Trump needs to know the facts before popping off about a bomb (except both the New York and New Jersey incidents were bombs, and likely jihadist bombs), called her “frail.” That’s charitable; she looked pained, without energy and moderately inebriated.

The second thing, which relates to the first, is the nugatory nature of her rhetoric. She starts off by referencing the bombings in New York and New Jersey as bombings, and then she gets asked about Trump calling them bombings and she criticizes Trump. One supposes any member of the media who would have asked her about that hypocrisy in her answer might have needed a parachute for the long trip down from 30,000 feet and that’s why we don’t see any evidence of actual journalism in this clip, but it doesn’t really matter. The damage is done.

A candidate for president at the top of his or her game doesn’t make such a blatant, obvious mistake as that – which will be brutally exploited (and rightly so) by Hillary’s opponent. It’s clear Hillary is fading, and quickly. The news of her incapacity making the rounds late last week (we had a post on it Friday which we tossed out there not so much as a statement of fact but as an exposition of some of the rumors surrounding Hillary’s campaign) might have been overblown, but she has all the appearance of a half-dead candidate – in all the ways you might choose to interpret it.