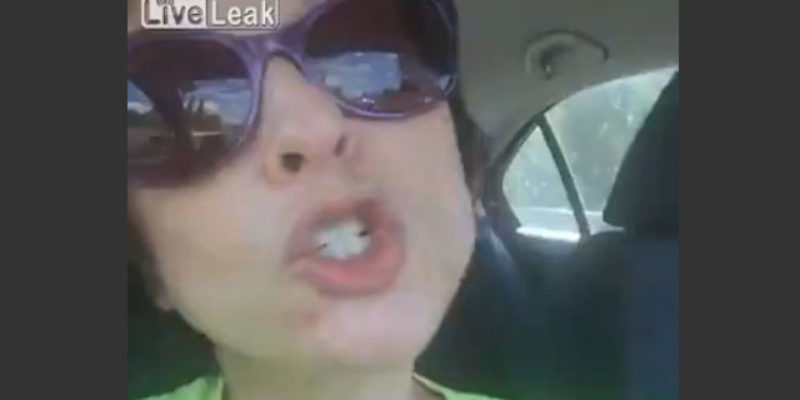 Ohhhh, if you’ve not seen this you’re in for a treat.

We would warn that the language isn’t safe for work, but we’d rather not. Your co-workers can handle an F-bomb or two – in this case it’s educational.

We’ll set the stage – this woman, whose name and location we don’t know, though the original LiveLeak link says is Portland, Oregon (that could just be the location of the person who uploaded it to LiveLeak and the star of the show could be more or less anywhere) – is a rather militant Hillary supporter and she’s “triggered” by the fact that a house along the route she travels to pick her son up from school has “Trump 2016” and “Hillary For Prison” signs in the yard. So on the day of the video in question, she happens to see the homeowner in the yard and then proceeds to stop in front of his house, roll down the window and shoot the bird at him.

Coupled with some verbal abuse, apparently. Which irritates him enough that he decides to get in his car and follow her, taking pictures of her license plate and so on.

The situation escalates to the extent that rather than picking her son up from school she decides to drive around until she finds a policeman and then flags him down to complain about being harassed.

And the poor cop has to play referee between the unhinged asshole Hillary supporter and the put-upon, mad-as-hell-and-can’t-take-it-anymore Trumpster. We don’t know what he told the guy, but you’ve got to see her reaction when he asks her what on earth would possess her to stoke a confrontation like that.

If this wasn’t a reasonably accurate description of the state of our country, it would be the funniest thing you’ll see all year. Instead, it’s just what we have.

Interested in more national news? We've got you covered! See More National News
Previous Article Here Are The New U.S. Senate Race Ads That Are Dropping Today
Next Article The Strippers Are Fighting Back In Court Against The Stupid Stripper Bill, And God Bless Them For It