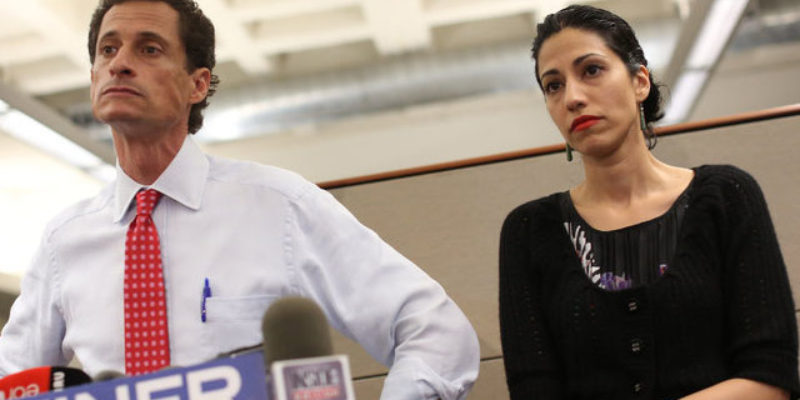 By now, you surely know about this…

In a letter to the Senate Judiciary Committee on Friday, FBI Director James Comey wrote that the agency is investigating additional emails that were discovered as part of a separate investigation.

“In connection with an unrelated case, the FBI has learned of the existence of emails that appear to be pertinent to the investigation … I agreed that the FBI should take appropriate investigative steps designed to allow investigators to review these emails to determine whether they contain classified information, as well as to assess their importance to our investigation,” he wrote.

And you probably also know about this…

Federal law enforcement officials said Friday that the new emails uncovered in the closed investigation into Hillary Clinton’s use of a private email server were discovered after the F.B.I. seized electronic devices belonging to Huma Abedin, an aide to Mrs. Clinton, and her husband, Anthony Weiner.

The feds were investigating Weiner over his latest example of pervert stupidity, namely that he got caught sending pictures of himself jerking off to a 15-year old girl in North Carolina. And in the investigation, while looking through the mobile devices in Weiner’s household to find out just how many little girls he sent such gifts to, turned up apparently hundreds or maybe thousands of Hillary’s e-mails “pertinent to the investigation.”

In other words, if you believe this re-opened investigation is the genuine item and not some PR stunt intended to cover the Bureau’s rear after being hammered for soft-playing the Clinton e-mail investigation’s regular season, what you might have here is the supposedly-elusive evidence of a mens rea in Hillary’s having put state secrets on a private server. If you’ll remember, there was a fairly historically significant colloquy a couple of months back between Comey and Rep. Trey Gowdy in which the former attempted to sell the latter on the idea that Clinton shouldn’t be prosecuted on a statue which specifically states that anyone who mishandles classified information through gross negligence – rather than criminal intent – because they couldn’t find evidence of criminal intent.

This was first of all a lie, because attempting to hide or destroy those e-mails, which Clinton clearly did, is generally more than enough evidence to establish criminal intent. But second of all it’s a contortion; Comey’s justification for applying a criminal intent standard to a law which has a gross negligence standard is that otherwise the law might be unconstitutional – and that is not his job. He’s a law enforcement officer, not a law interpretation officer, and his job is to investigate criminal behavior. If he finds that a law as written was violated, his duty is to refer that violation to the prosecutorial authorities.

But if the FBI now uncovers a bunch of Clinton e-mails previously thought destroyed (there were some 33,000 of those, which she outrageously alleged were “personal” and involved “yoga routines” and “wedding plans”) which make unmistakable the criminal intent here, that’s a different story and Comey simply can’t whitewash it any longer.

And it doesn’t particularly have to be a smoking gun which does her in. The new e-mails don’t have to have Hillary admitting she’s trying to hide anything, though in such a case no one ought to be surprised. They could involve Huma Abedin talking to someone else about the case in a way which would establish criminal intent, for example. Or, the easiest thing to imagine would be that these e-mails would have classified material coming from or going to Hillary – presumably if they’re new e-mails the FBI hadn’t seen before they’d be among the 33,000, and if there’s classified information on any of them which were deleted then it’s something which can’t be glossed over.

And that’s not a bad bet given this…

In a May interview with FBI agents, an executive with the Denver contractor that maintained Clinton’s private server revealed that an underling didn’t bleach-clean all her subpoenaed emails, just ones he stored in a data file he used to transfer the emails from the server to Clinton’s aides, who in turn sorted them for delivery to Congress.

The Platte River Networks executive, whose name was redacted from the interview report, said PRN tech Paul Combetta “created a ‘vehicle’ to transfer email files from the live mailboxes of [Clinton Executive Services Corp.] email accounts [and] then later used BleachBit software to shred the ‘vehicle,’ but the email content still existed in the live email accounts.”

Unless one of Clinton’s aides had the capability to log in to the PRN server as an administrator and remove a mailbox, her archived mailboxes more than likely still reside somewhere in that system. And they may also materialize on an internal “shared drive” that PRN created to control access to the Clinton email accounts among PRN employees. PRN has been under FBI order to preserve all emails and other evidence since the start of its investigation last year.

Clinton’s missing “personal” emails may also be captured on a Google server. According to FBI notes, Combetta “transferred all of the Clinton email content to a personal Google email address he created.” Only the FBI never subpoenaed Google to find out.

The FBI documents also reveal that Hillary’s server was mirrored on a cloud server in Pennsylvania maintained by Datto Inc., a tech firm that performs cloud-to-cloud data protection.

When PRN contracted with Datto, it requested that Hillary’s server be backed up locally and privately. But the techs forgot to order the private node, and they sent the server backup data “remotely to Datto’s secure cloud and not to a local private node.” The FBI never subpoenaed Datto’s server, either.

What the above means is there is no way to make the claim that those 33,000 e-mails are “gone,” and that we’ll never know what was on them. It’s a matter of time before they’re released to the public anyway – and if the FBI comes across a bunch of them on Huma Abedin’s phone, someday in the fairly near future it would come out that the Bureau knew Hillary had lied about not deleting any classified e-mails and covered for her.

After all Comey has been through of late, and with the further damage to the Bureau the Jill McCabe mess has done, at some point you’re simply asking too much of him to continue the charade.

But that’s just speculation. What we do know is 11 days before a presidential election we now have the favorite in the polls under an active FBI criminal investigation, and this is happening because of Anthony Weiner.

This could not have been fiction, because it would never have survived the test of plausibility.

A special parting gift – here is John Podesta howling like a baby over the FBI’s lack of transparency, which also could not be fiction…