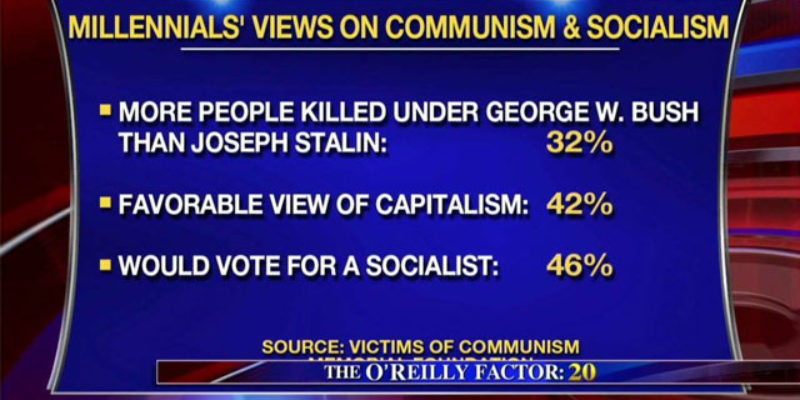 To my millennial friends highlighted in the above statistics, let me make it clear, Stalin in Europe and Mao in Asia, in the name of socialism, killed exponentially more people than anyone ever in history.

Historians and educators correctly remind us of how terrible the fascist Hitler was (and fascism is socialism, too, you know) but apparently ignore that the socialists Stalin and Mao killed many times more innocents than Hitler ever dreamed of. Could that be because they do not want to tarnish the image of socialism? Who knows but it is remarkable that a whole generation of American children have not been taught of the horrors done in the name of socialism.

For you millennials that were deprived of the truth a few more countries where socialism has been propped up by murder and torture in just the past few decades were; Cuba, Venezuela, Nicaragua, Zimbabwe, Romania, East Germany, Czechoslovakia, Yugoslavia, Bulgaria, China, Vietnam, Cambodia, and on and on and on. Literally millions have died in these lands, many of which, before socialism, were some of the most sophisticated civilizations of their time. Thinking that malevolent socialist tactics will pass by or just ignoring them has led to disaster. Failure to act has literally filled cemeteries.

Are there peaceful socialist states, of course, but the difference between a peaceful socialist government and a violent socialist government is just a fine line. During the current political campaigns and on our streets this summer we have seen anarchist attacks on our body politic. These are the same tactics the socialist anarchists used over and over in the last century. Their goal was to break down political and economic structures and then offer themselves as the saviors of the people. In so many countries the result was the elimination by violence of all opponents of the socialist state.

Based upon undercover video clips recently released, in order to discredit the Republican Party some Democrat anarchists hired thugs to infiltrate political rallies to start fights. Riots, attacks on authority, anarchist tactics in political campaigns all tactics exploited by the Stalinist agitators. The American media, the great traditional bulwark against danger to the Republic, has shown no sign of interest in the potential significance of these events. Again the question arises, is this because they too don’t want to tarnish the image of socialism? The same answer is who knows but time will tell I assure you.

I do not in any way believe that these “anything goes as long as it destroys democracy” tactics represent the core of the Democratic Party. But even so, these events do harken to a time when such were the accepted practices of those who would get their way by any means and may be precursors to an empowered socialist movement seeking to gain power through anarchy.

When our next generation’s education has deprived them of the truth, the history of the horrors of socialist political control, we all must have great concern. These statistics don’t lie, liberal education policies and practitioners over the last decades have created dangerous cracks in the foundation of our democracy.

For the sake of our future, we must all beware the insidious tentacles of the dangerous kinds of socialist tactics as they may be creeping into American culture. For the sake of us all we must insist that education be balanced and not lend credibility to attacks upon our history as a people.