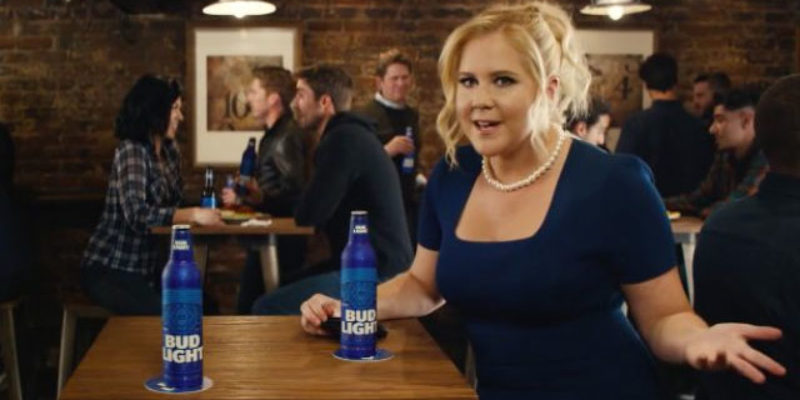 Surprisingly, pelting the public with partisan Democrat messages starring Chuck Schumer’s screechy-leftist nephew and a fat stoner who tweets about how much he hates guns and Ben Carson doesn’t actually sell beer.

Bud Light yanked commercials starring Amy Schumer and Seth Rogen weeks ahead of schedule after the beer brand saw a decline in sales in the third quarter.

Anheuser-Busch InBev, the parent company of Bud Light, launched the advertisement campaign starring the two celebrities back in January. Though most of them were election-themed, the brand decided to pull the plug on them more than a week before the election.

A spokesman for the company told AdWeek they were “clearly not satisfied.”

“Despite continued positive signs in brand health evolution, driven by millennials and Hispanics, 3Q was the softest performance of Bud Light for the year from a volume and share perspective,” Lisa Weser said.

“The Bud Light Party campaign helped us improve these brand attributes, but it did not translate to improved volume and share performance. While we are clearly not satisfied with Bud Light’s performance, we are already leveraging what we’ve learned to develop and execute new work.”

The first time we saw these ads, which was after Bud Light blew a fortune on the first one in time for the Super Bowl, we thought they’d bomb. And naturally they did, because appealing to only one side of the political fence while pissing off the other was never going to attract the mass market share Bud Light would need in order to show an advance against the increasing numbers and sales of microbrews all over the country.

Most of the public isn’t going to be attracted by a beer company which seeks to impose its product on an election. Elections are far too polarizing and pervasive for that to be a good idea. And when you make two obnoxious lefties the face of your ad campaign, you will turn off virtually every Republican and probably most independents, the majority of whom are independents because they are disgusted with politics and don’t want to put up with any more of it than they have to.

You would think that advertising people would know this fairly instinctively. But somehow it escaped them. And InBev lost its hat on that campaign as a result.