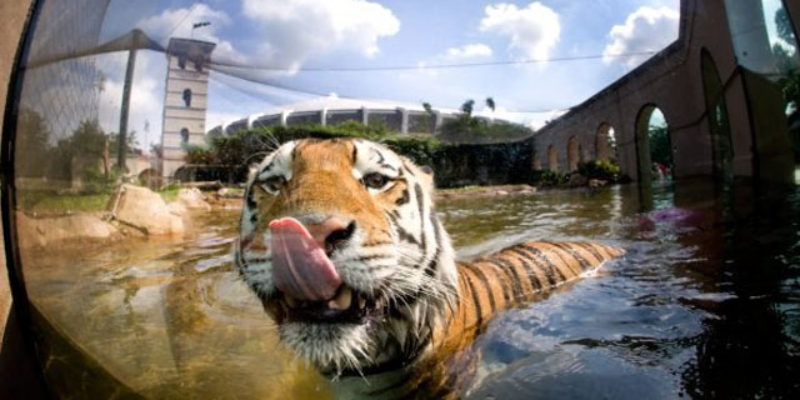 UPDATE: The last days of Mike VI are, sadly, upon us. A release from LSU…

LSU’s live tiger mascot, Mike VI, was anesthetized and taken to the LSU School of Veterinary Medicine on Monday, Oct. 3, for a CT (computed tomography) scan to check the status of the tumor in his head. The CT scan and a physical exam revealed that Mike’s tumor has resumed growth, and the cancer has spread.

Although the radiation treatment initially shrunk the tumor, the new CT scan revealed that the tumor, which is located on the right side of Mike’s head near his nose, has resumed growth and has encroached further into his nasal cavity. The cancer has also spread, and Mike has developed multiple nodules on the lower right rear leg, throughout his lungs and elsewhere. At this time, LSU’s Attending Veterinarian David Baker, DVM, Ph.D., believes that Mike could live another one to two months, but he will be humanely euthanized before he succumbs to the cancer.

“We will not allow Mike to suffer,” said Dr. Baker. “We will monitor him closely every day and will humanely euthanize him when the time comes. This is about treating Mike with dignity, compassion and respect.”

Mike will be outside on days when he feels well enough to do so; he will be kept inside if his caretakers feel it is in his best interest.

Mike VI was diagnosed with spindle cell sarcoma in May 2016 and underwent stereotactic radiotherapy on June 1 at Mary Bird Perkins – Our Lady of the Lake Cancer Center in Baton Rouge, La. For more information on Mike’s cancer diagnosis and treatment, please go to www.lsu.edu/miketiger or visit his social media pages (facebook.com/MikeTigerVI and @MikeTigerVI).

Mike will remain free to roam around his yard for the time being, which could be a week or a month. Once he starts going downhill, though, he’ll be in his night-house until it’s time to fully say goodbye.

ORIGINAL: …it seems there are reversals on the medical front.

It was hoped that the radiation procedure performed on LSU’s mascot would prolong his life by a year or so, but unfortunately it doesn’t look like that’s going to happen.

We’re going to lose him. And probably pretty soon.

More after the press conference later this morning.