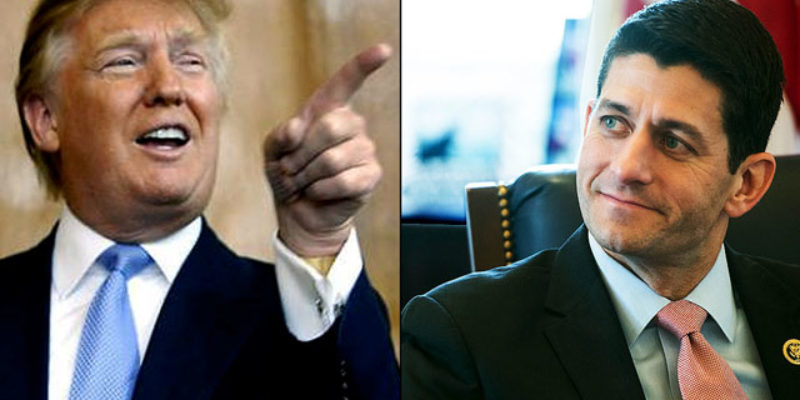 Surely, a large number of our readers will not appreciate my latest American Spectator column, which looks unfavorably upon the spasm of outrage among Donald Trump enthusiasts this week over the supposed betrayal of the GOP nominee by the Republican House Speaker Paul Ryan.

Ryan, on Monday, said he was encouraging Republican House members to align themselves on the presidential race as best as they can to hold the GOP’s majority, and not necessarily to openly support Trump in the wake of Friday’s video release showing Trump engaging in some indefensible “locker room banter.” The most recent polling shows Trump slipping beneath the waves as a viable presidential candidate and a disaster brewing on Election Day; Ryan’s advice to his members would, given those circumstances, seem perfectly rational.

But as I say in the column, it apparently isn’t enough for Trump and his supporters to be disappointed in Ryan’s advice for his people to head for the lifeboats. No, there had to be a grand conspiracy at work.

But by Tuesday, it was somehow Ryan’s fault. You see, former George W. Bush aide Dan Senor, who now works for Ryan and happens to be married to Campbell Brown — who worked at NBC from 1996 to 2008 — tweeted vigorously about the video and how it disqualified Trump as a presidential candidate.

So obviously it was Ryan who dunnit. Through Senor and his bride, with her aged NBC connections.

The people touting this stupid theory have yet to present any cogent reason why the House Speaker, who, again, still endorses Trump, would deliberately release material that would not only damage the Republican nominee’s chances for victory, but also cause chaos among the GOP base and make it more difficult for Ryan to hold a Republican majority in the House. Somehow Ryan is “Republican establishment” and therefore “afraid of Trump winning” — words spoken by former Arkansas governor and two-time failed presidential candidate Mike Huckabee this week.

Look, you don’t have to like Ryan. I don’t particularly like him either. He’s not the devil, although he’s also not off to a great start as House Speaker. But if you listen to him at all, his motivation is pretty simple — Ryan has an economic and political agenda that emanates from the writing and advocacy of people like Jack Kemp and Peter Ferrara, who advanced conservative policies to reform entitlements, spark economic development in depressed areas like inner cities, and encourage small business formation. Ryan has been working on those kinds of “opportunity society” initiatives all his adult life, and they’re the reason he’s not just in elective office but occupying his current position.

He endorsed Trump for a number of reasons, but one of them clearly is that Ryan believes he has a better shot at getting private Social Security accounts, for example, with Trump than with Clinton. Because Ryan is not an imbecile, you see.

But according to the Internet and Twitterverse, Ryan nevertheless is responsible for the Access Hollywood bomb. Because Ryan is apparently a glutton for punishment who relishes the idea of being called a “traitor to his party” and worse by Republican voters, for leaking a video that helps Democrats beat Republicans and remove him from his speakership in favor of Nancy Pelosi.

The internecine warfare going on this week has been fueled by a flurry of tweets by Trump himself attacking Ryan as “weak and ineffective,” vowing to spend the rest of the campaign getting revenge against those who have turned against him and expressing joy that the “shackles” have come off.

For one who has been suspicious of Trump’s candidacy for a long time as the creation of a Democrat-friendly news media and crossover voting into Republican primaries – a suspicion that rests also on a complete lack of any record on Trump’s part to indicate he has any conservative leanings, that the presidential candidate now seeks to declare war on his own party amid evidence that he has already destroyed his own chances at election is even further cause for suspicion. You don’t have to commit to a theory that Trump is a plant of the Clintons and the Democrat Party to see his actions as exactly what one would expect if he were.

It’s never good to put yourself in that position. That’s where Trump is today. And many of his supporters are blindly cheering him on.

To those people, a caution – Trump will be gone from Republican politics four weeks from today. Paul Ryan and more than 200 Republican Senators and congressmen will not be. Your only hope of stopping Hillary Clinton’s dystopian policy nightmares from becoming reality lies with them, not him. Be careful how you ladle out your loyalties.

Worth watching is an excellent Right Angle discussion between Bill Whittle, Stephen Green and Scott Ott…