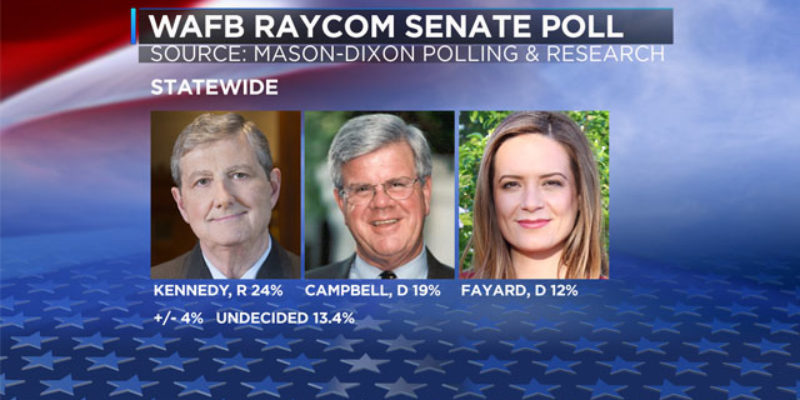 …to put it mildly.

In case you missed the results as they popped out last night, here’s how the only independent poll on the race in several weeks has it…

The poll, conducted by Mason Dixon, was performed for Louisiana’s Raycom TV stations in advance of a debate to be held on Nov. 2 at Dillard University in New Orleans and carried by FOX 8 in New Orleans, WAFB in Baton Rouge, KPLC in Lake Charles and KSLA in Shreveport. It’s a survey of 625 registered voters statewide.

What’s significant about the poll is a couple of things. First, as Duke managed to climb over the five percent mark, if only barely, he qualified to be on the debate stage.

At Dillard, which is a predominantly African-American school. So that should be oodles of fun (the Hayride offered sarcastically). We now have our gigantic distraction which pulls attention away from the serious candidates in the race.

Second, the Mason Dixon poll blows a sizable hole through the memo on the race put out by the Fleming camp on Monday, in which their internal polling showed Fleming with significantly more strength, and at Kennedy’s expense. The narrative pushed by Fleming’s campaign, and also by Boustany’s, is that Kennedy had come down to earth after holding a large early lead, and that as he continued to fall it would be a Fleming-Boustany fight for a spot in the runoff alongside Foster Campbell. But this poll would serve as a rebuke to that narrative and an indication that Kennedy’s lead never did evaporate to the extent claimed.

For Kennedy’s part, his campaign notes that he’s been up on TV pretty much on a constant basis for more than a week and since that happened his support has stiffened and begun to grow. That would make sense in light of the Mason Dixon poll.

And third, Maness made a great show of huffing and puffing over having been approached by Paul Dickson, a major donor to Fleming, over the possibility of dropping out and supporting the other ideological conservative in the race – going so far as to threaten to press charges (for what, we have no idea). This poll would show Maness’ reaction was 180 degrees wrong; as things stand based on the Mason Dixon poll he’s going to finish behind Duke, and doing so would undoubtedly end his hopes of building a political career. Getting out of the race in advance of such an ignominious result and bringing his support to someone with a similar worldview would make him a more influential player in the race and possibly set himself up to gain support for a future run at a more attainable seat. After all, yesterday Abhay Patel, whose campaign never took off largely thanks to Duke sucking up all the media attention that another insurgent candidate with more palatable conservative ideas might have merited, dropped out of the race and endorsed Boustany. It’s not necessary to act like dead-ender Japanese soldiers on Okinawa if your campaign is clearly not headed for victory. The poll shows that Dickson was trying to do Maness a favor, but of course no good deed ever goes unpunished.

But one thing that the Mason Dixon poll and the JMC Analytics internal Fleming poll released on Monday both indicate is that it’s Campbell, and not Caroline Fayard, who will be the Democrat in the runoff. That’s good news for Kennedy, or if Boustany and Fleming do manage to catch him then one of those two, because Campbell is the least electable of the five major candidates in the race.

A prospective Kennedy-Campbell finale would be uncompetitive. Based on the Mason Dixon poll it appears, despite a lot of noise to the contrary, that’s what we’re going to get after the Nov. 8 primary.