This doesn’t exactly scream “Enthusiasm!” to us…

“Yesterday, I met with Commissioner Foster Campbell regarding the country’s last remaining undecided US Senate seat. After the setbacks suffered last week by the Democratic Party nationally,‎ it gives me great hope to know that Foster Campbell will protect President Obama’s legacy and fight for the same Democratic Party values that Secretary Clinton, myself, and so many others have championed. I’m happy to stand with Democrats across our state and country in support of him.”

What are the elements here?

1. The Democrats have suffered setbacks. Well, yeah – we all know that. In fact, it’s so obvious that it seems a bit gratuitous to even mention. You almost get the impression that she’s telling everybody Campbell is going to lose.

2. She then ties Campbell to Obama, who is as popular in Louisiana as the West Nile virus. And his legacy is even less popular than that, so she goes and mentions it.

3. She then mentions Hillary Clinton, and virtue-signals that she’s fought alongside her. As Campbell practically had to be dragged to support Hillary, Fayard intimates that he wasn’t on her side when she says he’ll fight for the same values as Hillary did.

4. Then she says she’s happy to stand with Democrats in support of Campbell, but you can’t win with just Democrats in Louisiana; you need independents as well. Fayard held herself out as someone who could pull independent voters and identify with them – nobody bought that, of course, but that was her shtick. See item #1 above – it’s a signal that “this guy’s gonna lose.”

It’s about as perfunctory and reluctant an endorsement as you’ll ever see.

Plus, we have this…

This is a step in the right direction to join forces. I look forward to hearing more of what @CampbellforLa has to say. #lasen pic.twitter.com/fboc1Bqy76

That was yesterday, and it’s a wildly entertaining tweet. Because the tweet it references had to be screen-shotted – Mary Patricia Wray tweeted it and then took it down.

Why would Mary Patricia Wray tweet an apology and then take it down? Because she didn’t want to do it in the first place, and probably had to in order to get Fayard’s endorsement for her client.

We know this because of the Times-Picayune’s article on the endorsement, which had this amusing quote…

“Ms. Fayard had some peculiar demands and we tried to meet them all,” Wray said Tuesday. 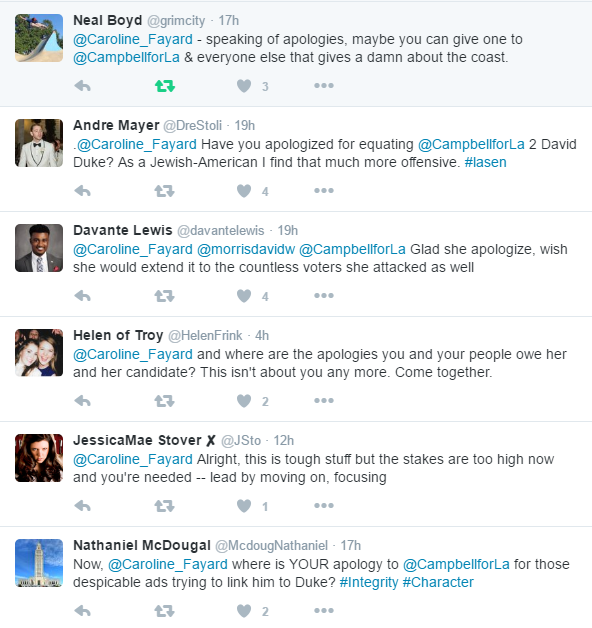 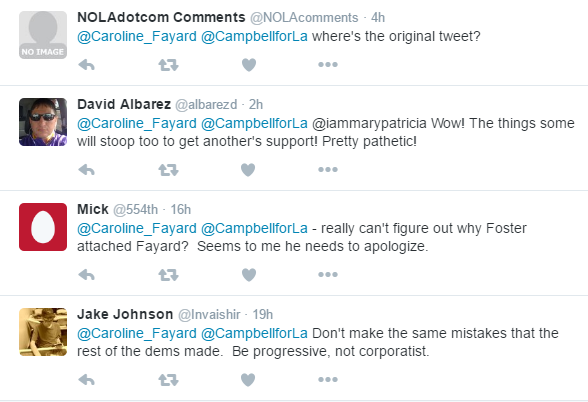 Like we said yesterday, this has all the makings of a Senatorial runoff blowout for the ages.