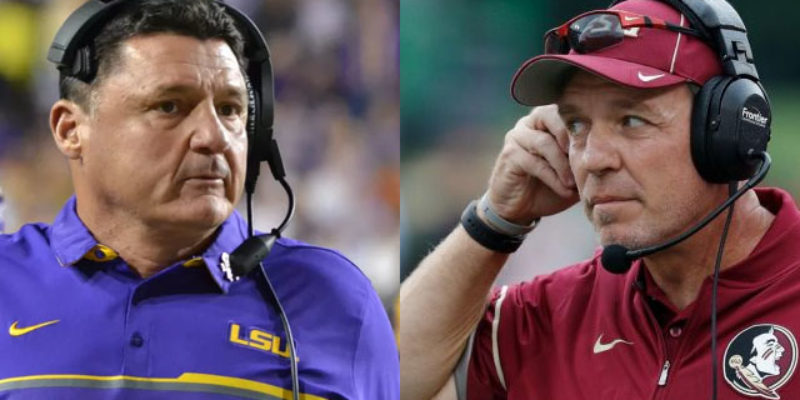 It happened a bit later this year, but somebody involved with the LSU coaching search has reached out to the media.

This morning, there are leaks naming Jimbo Fisher as the coach “on the clock” for the LSU head football coaching job. James Smith at NOLA.com…

LSU athletic director Joe Alleva, who was in hot pursuit of Fisher last fall, has maintained the lines of communication with Fisher’s representatives.

Fisher’s buyout at Florida State would be $5 million if he were to leave prior to the 2017 season. Sources said that steep figure would not deter LSU from hiring Fisher as the program is preparing to invest heavily in the pursuit of national championships.

And now the leak…

“Jimbo was Joe’s guy from the beginning, and I just don’t see him passing on hiring him,” a source close to the situation said, referencing the AD’s pursuit of Fisher last fall when Miles was first under fire. Fisher was the offense coordinator for the Tigers’ national title team in 2003 under Nick Saban. He has been FSU’s head coach since 2010, winning a national championship in 2013.

Fisher, however, has competition from an in-house candidate. Orgeron, who has led LSU to a 4-1 record, including a 10-0 loss to No. 1 Alabama, is making a strong case to be given the job. The team loves playing for “Coach O” and the support for Orgeron is growing within the LSU community, and not just from casual fans.

Some of LSU’s largest financial backers are starting to warm to the prospect of Orgeron leading the team next season and beyond, according to a source connected with the school’s benefactors.

Orgeron’s fate might hinge on his ability to lure a top offensive coordinator to Baton Rouge to join his staff if he were hired.

“He would have to have the right guy lined up, or there will be a lot of resistance from influential people,” according to a source briefed on the search.

That Fisher is the leading candidate for the LSU job is hardly a surprise. One of the problems with the potential hire of Fisher last year, though, was all the media attention about the LSU job before LSU was even in a position to make a job offer. That’s not to say LSU and Fisher (or Fisher’s agent Jimmy Sexton) weren’t talking; they were. But LSU president F. King Alexander pulled the plug on the coaching change before it could even get fully started.

And he did it because of bad press. Specifically, bad press that came from someone involved in the coaching search talking to the media too early.

Now someone is talking too early again.

The circumstances are different this year, of course. LSU’s job is actually open at the end of the year. But from Fisher’s perspective it’s still way too early for his name to be publicly connected to the LSU job.

It doesn’t make him less marketable to LSU for his name to be bandied about for the job. But what it might do is make him more expensive. Florida State now knows that LSU is coming after Fisher as the top candidate for the job in Baton Rouge, and not Houston head coach Tom Herman. That means they’re going to look toward giving him a raise and “bidding him up” for the LSU job.

There is a number at which hiring Fisher becomes prohibitively expensive. What that number is, we don’t know. But seeing as though he’s already at $5 million per year, together with back-end pay at the end of his contract which would make it worth about $7 million per year, LSU probably has to pay at least that amount and they’re comfortable with the idea.

What if the effective number is more like $8 million? Because now that Fisher’s name is out in the mainstream media as LSU’s unquestioned top choice, that’s what Sexton is going to ask for. Not just from LSU – from Florida State, too.

The best way to steal a Fisher away from Florida State is to come like a thief in the night and get him by surprise. That wouldn’t have been overly possible after last year’s flirtation, but if nothing else LSU would have wanted to keep everyone guessing as to who the top candidate would be.

Now, you don’t have that. Now you’re going to be in a bidding war with Florida State for their coach. It’s been said that Fisher loved his time in Baton Rouge so much he’d crawl to LSU, so perhaps none of this matters – he gets a lucrative offer and he’ll take it regardless of what FSU’s counter-offer is. The usual way these things work, though, is for the current employer to give the coach a raise and the suitor gets left out in the cold.

The chances of which are increased when the pursuit goes public.

Meanwhile there is Ed Orgeron, who has done a very good job as LSU’s interim coach and has his team playing at a higher level than LSU was playing earlier this year when Les Miles was the coach. Orgeron will likely be favored to beat both Florida Saturday and Texas A&M next Thursday; neither team has LSU’s talent and both are riddled with injuries including to their starting quarterbacks. Winning out isn’t all that impressive a task anymore; not compared to what was projected after LSU’s schedule was remade following the postponement of the Florida game last month.

That means Orgeron, who probably could have earned the permanent head coaching job on the field two weeks ago when Alabama came to town but wasn’t able to, is in the political sphere trying to get the job. You can’t blame him for that – he’s a Louisiana guy and this is his dream job and he wants to hold it. He’s going to do everything he can to be named the permanent head coach at LSU, and if that means lobbying boosters and Board of Supervisors members and Joe Alleva himself, then of course he’ll do those things. And now that a brutal crucible of a November schedule looks less challenging, Orgeron can’t point to his success on the field as proof that he can coach at an elite level – he laid down an impressive beating of Arkansas, but it wasn’t as impressive a beating as Auburn laid on them two weeks before. This week he has Florida, but Florida is without seven starters due to injuries. On Thanksgiving he travels to Texas A&M, but Texas A&M just lost at home to Ole Miss one week after losing to Mississippi State, and their offense is greatly diminished without Trevor Knight under center. It’s still a great accomplishment for him to win out, if he can, but it no longer looks like something that proves he’s the best guy for the job. He’ll have to run up the score on Florida and Texas A&M, for starters, and even then one could argue that it’s competence rather than excellence.

As former LSU running back Harvey Williams told one of the morning sports talk shows in Baton Rouge this week, “You’re supposed to whip Arkansas’ ass.”

One wonders, under those circumstances, if someone leaking coaching search information to Smith outing Fisher as the prime candidate for the job and therefore tipping FSU off that it’s time to start upping the ante wasn’t more than just a bit of chattiness. It seems like the great political game is afoot.

Interested in more news from Louisiana? We've got you covered! See More Louisiana News
Previous Article HITHER AND YON: Democrats From All Over Are Harassing Louisiana’s Electors Pledged To Trump
Next Article Caroline Fayard’s Tepid Endorsement Of Foster Campbell