Trump has a 1-point lead over the former secretary of State, 46 to 45 percent, as of Tuesday morning.

Libertarian nominee Gary Johnson registers at a new low of 3 percent, while Green Party nominee Jill Stein rounds out the field with 2 percent.

Fifty-three percent of likely voters have “strong enthusiasm” for Trump, according to the poll, while 45 percent feel the same about Clinton.

Voters voiced more enthusiasm for Clinton’s campaign, with 52 percent saying they had “strong enthusiasm” for her and 49 percent stating the same of Trump.

The Washington Post/ABC News conducted its latest poll of 1,128 likely voters via cellphone and landline telephone interviews from Oct. 27 to 30. It has a margin of error of 3 percentage points.

It should be said that the movement in the ABC/WaPo poll isn’t replicated across the board. Other polls have shown a lot less. The Investors Business Daily tracking poll had Clinton up 3 on Friday, up 4 on Saturday, up 2 on Sunday and up one point in the past two days. Rasmussen moved from Clinton +3 to even from Monday to today.

But it does look like Trump is gaining on Clinton and, with the FBI reinvestigation filling the airwaves, perhaps feeding off the lost momentum in the Clinton campaign. The RealClearPolitics average… 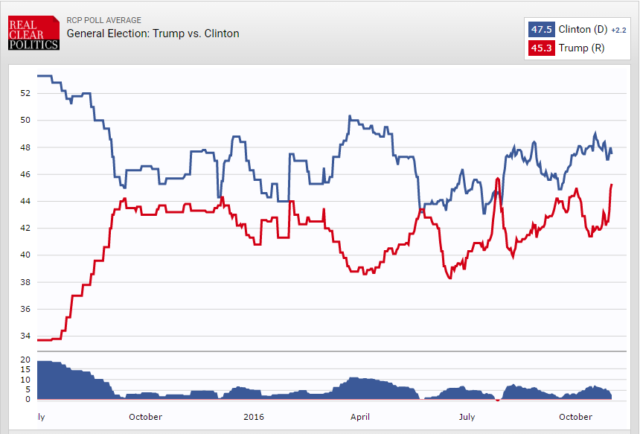 Trump is on the move.

Of course, a stronger GOP candidate would never have been behind in the first place and the recent revelations would have led to a Democrat rout up and down the ballot. So there is that. But that’s not what we have, so perhaps we might be hopeful that maybe the American people are deciding they’d like to address the urgent need to put the Clinton machine out of business first before tackling the problem of Trump later.

Interested in more national news? We've got you covered! See More National News
Previous Article Now It’s Time To Learn Who Peter Kadzik Is, And You Probably Won’t Like Him
Next Article The New Foster Campbell Ad Cites…Daily Kos…As A Source