In what should be the least surprising story of the year, Louisiana’s Secretary of Transportation and Development Shawn Wilson said yesterday that he wants to raise taxes.

Wilson works for John Bel Edwards, whose appetite for tax increases appears fairly similar to that of a junkie for another heroin injection, so it’s almost a dog-bites-man story that one of his underlings would extoll the virtues of another tax increase. But Wilson promises we’ll actually like this one…

“I tend to be on the side of wanting to see bold change and impact as it relates to infrastructure,” Wilson said.

A $700 million boost “is a very good, practical, pragmatic figure,” he said.

Wilson made his comments three days before a key meeting of Gov. John Bel Edwards’ transportation task force, which is supposed to come up with ways to solve the state’s $13 billion backlog of road and bridge needs and other issues.

The panel, which is set to meet on Thursday at 9 a.m., will start discussing a variety of resolutions on how to finance any improvements, including a likely increase in the state gasoline tax.

Final votes on the recommendations are expected Dec. 13.

Wilson, a key Edwards lieutenant and co-chair of the task force, declined to say how big an increase would be needed in the gas tax as part of any proposed funding plan.

Each penny raises about $30 million per year, and a 20-cent hike has been tossed around unofficially for weeks.

“I think that will be the recommendation,” said House Transportation Committee Chairman Kenny Havard, R-St. Francisville and a member of the task force.

Havard rightly notes that a 20-cent gas tax increase, which would be a doubling of Louisiana’s state gas tax, will go over like a lead balloon with the people of the state.

And truth be told, it’s a bit puzzling to see Edwards’ people throwing gas taxes out as funding solutions before the new administration takes office. Donald Trump has, after all, been talking about a trillion-dollar infrastructure plan – largely to be financed with public-private partnerships which would change the dynamic of how roads are constructed and maintained. Trump’s plan brings private investors to the table, using revenue bonds as backing for capital to flow into infrastructure improvements, and it brings a change from the tired idea of gasoline taxes to fund infrastructure when cars are made increasingly more fuel-efficient. Why not wait to see what Trump has to offer, and then work with members of the congressional delegation like Steve Scalise and Garret Graves to maximize Louisiana’s yield from that? Once it’s known how much help from DC can be had, then you can beg for more tax dollars.

Wilson is talking about “bold change” while he’s talking about doubling a tax that constantly disappoints in its results in the first place. At some point one wonders if this isn’t just taxing for taxing’s sake. There is no change of any kind here, just more of the same failure we’ve always had.

And as Americans For Prosperity’s John Kay noted here at the Hayride last week, DOTD wastes a fortune in the tax dollars they already get. Maybe Wilson can look in his own agency’s wallet first.

They’ll surely chalk this up to “budget cuts,” but that doesn’t particularly fly. LSU is losing perhaps its most valuable leader to a job outside the state.

Moret, previously the state’s economic development chief, has held the post at LSU since May 2015. He says the new position offers him an opportunity “to leverage my experience and education in a new way,” as well as be closer to family. His mother lives in Richmond; his in-laws are planning to live there for much of each year going forward.

Says Moret: “The combination of the family and professional benefits represents a rare opportunity that we simply could not pass up.”

Prior to joining the LSU Foundation, Moret was appointed as secretary of Louisiana Economic Development. He had previously served as president and CEO of the Baton Rouge Area Chamber, or BRAC; management consultant with McKinsey & Company; project supervisor with Trinity Consultants; assistant to the chancellor of LSU; an independent consultant to Harvard University; and a public policy fellow with the Public Affairs Research Council of Louisiana, or PAR.

“Stephen has left an indelible mark on our fundraising efforts,” says LSU President F. King Alexander in a prepared statement. “He has positioned our upcoming campaign for great success, and we wish him well on his next endeavor.”

Since joining the foundation, Moret has acted as a liaison to Alexander to ensure more efficient and effective fundraising efforts among LSU’s affiliate support organizations statewide, a news release says.

Under his, tenure, the LSU Foundation has modernized the donor database it shares with the LSU Alumni Association and Tiger Athletic Foundation; crafted a blueprint for the future of development at LSU, in collaboration with LSU’s affiliate support organizations statewide; defined the operational architecture needed to launch the university’s next capital campaign; built LSU’s first annual giving team and introduced a campuswide, collaborative annual giving effort; and broken ground on the Nicholson Gateway Project.

“LSU is Louisiana’s strongest economic asset,” Moret says in the news release, “and the plan we have developed with President Alexander and the campus leadership team to achieve and sustain a transformational level of academic philanthropy is one that I believe will have a multigenerational impact on LSU.”

Moret has only been at the LSU Foundation for a year and a half, and in that time he’s been the best fundraiser the school has had. Which doesn’t say a lot – LSU has always done a very poor job of academic fundraising, which is something that blew up a few weeks ago when the Baton Rouge Advocate ran a story about how the university is the only one in the SEC that it’s known raises more cash from athletics than otherwise. Alexander then penned an op-ed protesting the story while substantially conceding all of its points, making the weak argument that since the athletic department gives money to the academic side athletic fundraising shouldn’t be counted completely as such.

And now the guy who’s given hope that perhaps this situation could change is leaving. It’s not because of budget cuts; Moret raises money rather than spending it.

One wonders if his departure – which comes for a legitimate reason that he’s stated, of course – isn’t reflective of LSU’s greater problem; that being poor leadership at the top. In all our years of watching LSU it’s never been the university’s funding that has driven off great faculty and staff, it’s been the leadership vacuum and the politics which rush in to fill it.

LSU’s vacuum is greater now than it has been for a long time. LSU is back to the bad old days of the 1990’s, when its doddering chancellor Bud Davis presided over an exodus of the university’s talent before then-Gov. Mike Foster made it a point to rebuild the university. Foster’s efforts paid off in about 10 years of positive momentum which stalled after Mark Emmert left, and now the decline has begun again. Moret’s departure is a signal of that.

Last week the Times-Picayune had a fluffy article about the hopeless Senate campaign of Public Service Commissioner Foster Campbell, more or less cheering him on for his fighting against long odds in the race to be decided Dec. 10. The piece didn’t focus much on Campbell’s struggles with black voters, or his feud with Caroline Fayard that resulted in the least-enthusiastic endorsement in modern Louisiana political history.

Instead it was more of a biography of Campbell and how he’s for the po’ folks.

Campbell, however, said he believes his politics forged at that store counter in Fryeburg years ago can propel him into the Senate despite daunting odds.

His uncle, who lost his hands in a dynamite accident, was at the counter sifting through a box of shotgun shells with his hook. He extracted 10 to buy. Campbell, the son of a shop owner and in fourth grade at the time, couldn’t understand why his uncle didn’t buy the whole box.

Not everybody’s daddy owned a hardware store, his uncle told him.

“I realized then that’s all he could afford,” Campbell said Wednesday. “Ever since that moment, I have always been on the side of poor folks.”

Except his brand of politics has prevailed in Louisiana more often than not ever since Huey Long was wrecking the state’s private sector, and Louisiana is still poor. Campbell is such an advocate for poor people that he insures we’ll have more of them.

Nobody is buying his tired line of BS. Kennedy got the endorsement of the Louisiana Sheriff’s Association, which is more or less a death-knell for Campbell’s campaign. More of Louisiana’s sheriffs are Democrats than Republicans, though they’re anything but a partisan organization – they usually endorse the candidate they think is going to win.

And that ain’t Campbell.

Sadly, we won’t be done with him after Dec. 10 like we ought to be done with Hillary Clinton following her loss in November’s presidential election. Campbell is still on the PSC, and you can bet he’ll keep running for re-election. He’s one of those pols who’ll get dragged off the government teat either in handcuffs or a pine box.

For Today’s Last Thing, a brain-teaser… 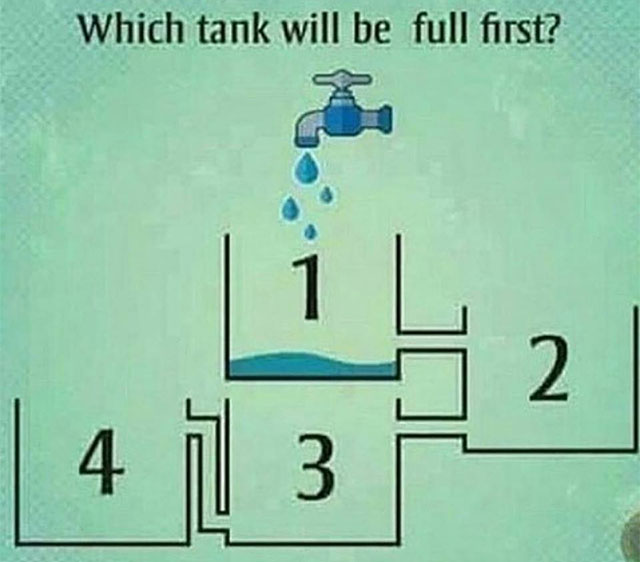 At a trickle, the answer ought to be that 3 and 4 fill more or less simultaneously. Tank 3 will fill to near the top first, but once it gets to a level equal to the top of the pipe into Tank 4 it will flow to that tank.

With heavier flow, the answer changes.

Interested in more news from Louisiana? We've got you covered! See More Louisiana News
Previous Article Bayou Classic Weekend Ends With A Shooting On Bourbon Street
Next Article Bobby Jindal Doesn’t Appear To Be Getting A Cabinet Appointment From Trump