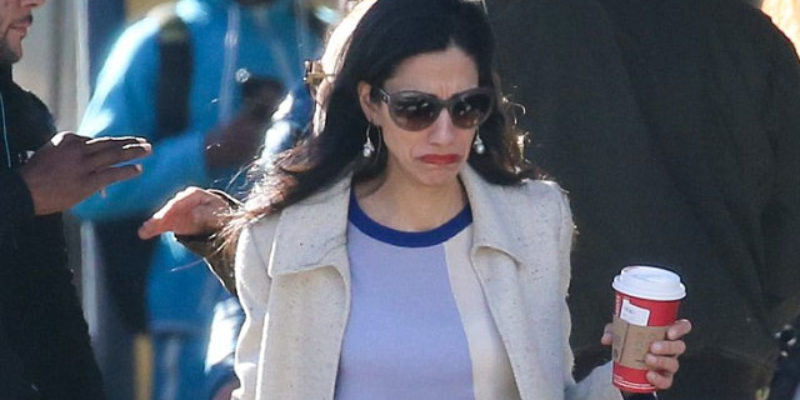 The Hillary Clinton concession speech which came a day late after John Podesta sent all of her supporters home Tuesday night with not glimpse of the candidate was interesting mostly thanks to the long faces of the sycophants and functionaries of the Clinton machine who assembled for the funeral.

And perhaps most prominent among them was a badly shaken and frightened-looking Huma Abedin, who may have had more invested in a Clinton victory than anyone else in America.

It seems Abedin’s mental state hasn’t improved. The Daily Mail found her on Friday in a rather bad way…

Hillary Clinton’s closest aide Huma Abedin wept openly in the street on Friday as she returned to the place where the Democratic candidate’s campaign was fought – and lost.

Abedin looked like she had the weight of the world on her shoulders as she visited the campaign headquarters of the failed presidential candidate – after her own stumbles and her husband’s sexting habits helped contribute to Clinton’s historic defeat.

Abedin ventured out of her Manhattan apartment and went to the office three days after President-elect Donald Trump shocked the world by defeating Clinton.

She approached the tall building with stunning views which had until Tuesday been filled with staff an volunteers carrying a bag and a purse.

The pain and emotion of the situation were clearly visible on the face of the long-time loyalist, despite the dark large-frame sunglasses that covered her eyes.

The Daily Mail piece only briefly touches on the fact that Abedin is smack-dab in the middle of the FBI investigations into Hillary Clinton which are likely to be full speed ahead now that there is no prospect of a Clinton administration and Justice Department to tamp them down. There were reports earlier this month indicating that Abedin had “flipped” and was cooperating with the FBI, as had her estranged pervert husband Anthony Weiner who has checked into a facility in Tennessee for treatment of sex addiction.

In short, here is somebody whose life has completely collapsed.

It’s hard not to feel sympathy, because clearly she’s worked very, very hard to get as far as she has. That said, Huma Abedin not accomplishing what she wanted to accomplish in her career is a very, very good thing for the country – she’s involved in all the rotten-to-the-core activities of the Clinton Foundation and before all this is over even her cooperation is quite likely not enough to keep her out of jail if the full scope of the investigations reveals what many believe it will.

And if Abedin gets a pardon from President Obama before the inauguration in January, it doesn’t make her life a whole lot easier. For one thing, she’s a political animal completely tied to a machine which is now defunct in Democrat politics, and if she carries with her the stigma of having had a presidential pardon it will be hard to monetize the influence she would still have left.

And even within Clinton-world Abedin is going to be seen as radioactive, since she’s the wife of the man whose stupid sexcapades ended up blowing the lid off Clinton’s legal troubles and perhaps dooming her to defeat.

On top of that she’s staring at a failed marriage and a ruined personal reputation. She’s now a figure of ridicule.

It’s certainly a rough week. She’s now a tragic figure in American politics – perhaps one of many to surface on the Democrat side in the next several weeks and months.