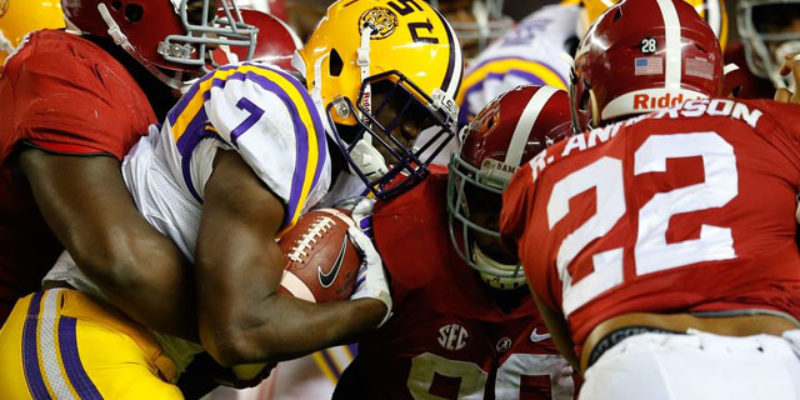 The atmosphere was the stuff of legend, and so was the defense. But following a 10-0 loss at Tiger Stadium in a game which contained all the elements of a glorious upset until the weight of offensive ineptness dragged the entire effort into the muck, it’s time to face a sad truth or two.

And this might be true – sadly – no matter who LSU’s next coach is.

The expectations behind this program are not out of sync with reality. With the resources on campus, the fan base, the booster money available, the football talent bubbling up in Louisiana’s high schools and the prestige of the program, there is nothing wrong with setting sights on national and SEC championships as the standard by which the performance of the football program is judged.

Unfortunately, by now it seems patently obvious that LSU’s fate will be to wait Nick Saban out in order to achieve the promise of those expectations.

That isn’t to say LSU fans should have to resign themselves to enduring an annual heart-ripping loss to Alabama. The current six-game losing streak at Alabama’s hands will be broken at some point, and perhaps at some point prior to Saban’s retirement or departure for another shot at the NFL, should he determine that to be his final coaching mountain to climb. But to achieve an annual status as league favorite, hoisting trophies in Atlanta in December or some other venue in January – those things may seem tantalizingly close, but they are nevertheless across a chasm from being reality.

That’s what Saban has created, and not only for LSU. He’s created it for Auburn, and Texas A&M, and Arkansas, and even for Ole Miss despite losing to the Rebels in 2014 and 2015. Ole Miss’ coach Hugh Freeze and a cabal of well-heeled donors attempted to clear that chasm by essentially turning his program into a semipro franchise, and for a time it looked like he might create something which would challenge Alabama, but doom awaits them courtesy of the NCAA in the offseason.

Which means that while LSU should weigh its options in the upcoming decision on a coach to carry the program into the future under the standard of who can give the program what Saban has given Alabama, Tiger fans are going to need to recognize that what’s realistic is a truly great hire will create the program as a clear second-place finisher in the Western Division with preparations to be the next king of the conference when Saban finally moves on.

That’s the lesson of Saturday’s loss.

LSU, defensively, is right there with Alabama. The Tigers don’t have the dominant defensive line the Tide has, but Dave Aranda’s scheme and the speed and aggressiveness of his linebackers and defensive backs were more than enough to turn the game into a Mexican standoff for three quarters until a string of questionable-to-atrocious calls by the officials, and fatigue courtesy of LSU’s offense possessing the football for only seven minutes of the whole second half, finally set in.

No defense in the country could have held up as well as this one did. LSU held a team averaging 43 points per game to 10 points, and held a 500-yard-a-game offense to only 325 yards. The knowledge that perhaps the two best performers on the defense Saturday weren’t future high draft picks Tre’Davious White, Arden Key or Jamal Adams but rather seniors Dwayne Thomas and Duke Riley, who not long ago were considered career backups, is significant. Thomas and Riley have both blossomed in their final year at LSU thanks to Aranda’s scheme and the development of players in this defense; that could bode well for some of next year’s hopefuls like Corey Thompson, Frank Herron, Ed Paris and Donnie Alexander.

Aranda must be retained for next year, regardless who the head coach is. Aranda’s time as an assistant coach is short – he’s destined to be a head coach. But one goal of LSU’s upcoming head coach hiring process must be to hold off his ascension to a program of his own – by paying him more, perhaps, than any job outside a Power Five conference could – and thus keeping him and his scheme around for the new coach to build on.

Is Ed Orgeron the new coach?

Orgeron didn’t do anything to disqualify himself Saturday. His team fought its heart out, and but for that string of questionable-to-atrocious decisions by the zebras it’s not inconceivable LSU might have managed an upset against a better team in that game. No decision should be made on Orgeron as a result of the Alabama game, but rather he must be judged on the three games to come. Next week in Fayetteville, Arkansas Orgeron has the challenge to rally what surely will be a dispirited LSU team to avoid the annual post-Alabama slump which ultimately ruined Les Miles’ career. The last two seasons have seen Arkansas thump LSU by a combined score of 48-14; Arkansas isn’t even LSU’s equal talent-wise, much less to have that kind of on-field superiority.

If Orgeron can get this team to bounce back and win at Arkansas, and then follow that with a win at home against Florida before finishing with a road victory at Texas A&M, he will have earned a shot at continuing as LSU’s head coach. But if he can’t pull off that admittedly Herculean feat, LSU is going to have to look elsewhere.

Because beating Alabama is no longer the criterion athletic director Joe Alleva has to look to in his football coach. Beating everyone else is. If Orgeron can win the final three games he’ll show he can fulfill it. If he can’t, then he’s not the Moses who’ll ultimately deliver the promised land.

What the Alabama performance showed is very little about LSU’s offensive scheme, playcalling and execution is championship caliber. It’s even questionable whether Orgeron’s commitment to a pro-style offense, and search for an offensive scheme which looks like the one his mentor Pete Carroll installed at USC, is the right idea. If Orgeron is to be the coach, it can’t be with the LSU offensive staff intact – everything needs to be ripped out and replaced the way so many homeowners in Baton Rouge recognize post-flood.

Can that be directed from above? Clearly Aranda as the defensive coordinator can be a mandate. It’s hard to imagine a Tom Herman or Jimbo Fisher, assuming those two are still the A-list choices to replace Miles, balking at the idea of holding on to Aranda. But demanding that Orgeron go out and hire an offensive coordinator and staff who will coach a style Orgeron isn’t familiar or comfortable with when there is no evidence assembling those pieces will produce a top-flight product is very difficult indeed.

Orgeron and interim offensive coordinator Steve Ensminger would argue that they’re working with the leftover scheme and terminology Miles and his former offensive guru Cam Cameron used, and to redesign the offense on the fly was never realistic. In this they would have a point, and it’s also fair to remember that in the first three games the new regime coached the offensive results were salutary. That’s why the audition should continue; Arkansas and Texas A&M have relatively poor defenses, and LSU should be able to move the ball and score on them the way the Tigers did in those first three games. And while Florida’s defense might be a little closer to Alabama’s in quality, Tennessee scored 38 points on them and Arkansas scored 31; LSU should be able to manufacture enough offense to win that game.

But against Alabama, Ensminger was clearly outmatched. LSU brought nothing to the table offensively that even threatened Bama’s defense, and more punts (eight) than first downs (six) were the result. The only accomplishment of the offense was that it brought a year-long Alabama string of scoring non-offensive touchdowns to a halt, but that came mostly due to throwing three-yard passes on third and six and running up the middle without holes.

LSU’s offensive line was manhandled on nearly every play on a man-for-man basis by Alabama’s defensive line, for the second year in a row. If that’s what you have, running a pro-style offense is a complete waste of your skill talent and perhaps it’s time to look into something out of the Hal Mumme-Mike Leach-Kliff Kingsbury offensive style to replace it. After all, LSU has a quarterback committed in Myles Brennan who looks plenty capable of running that style of offense.

It should be understood that going to a pass-happy offense rather than the smash-mouth style LSU has doggedly clung to for virtually the entire existence of the program doesn’t mean you can’t run the football; Leach’s Washington State team has a couple of running backs who average better than six yards per carry, and Dana Holgorsen’s West Virginia team averages well better than 200 yards a game on the ground. Last year Kingsbury’s Texas Tech team had a running back rush for 1,492 yards. A Derrius Guice, who is head and shoulders better than any of the running backs coached in systems derivative of Mumme’s old Air Raid offensive style, would be a devastating weapon in the space a spread passing game would create.

But that means a sea change in offensive thinking that, frankly, Orgeron may not be prepared for.

And so the audition continues. There is cause for optimism that Orgeron could earn the LSU job. What the Alabama game proved is there is no cause for delusion that championships await around the corner. For the foreseeable future, LSU is playing for second place and hoping Saban’s forgotten wanderlust resurfaces to carry him away.