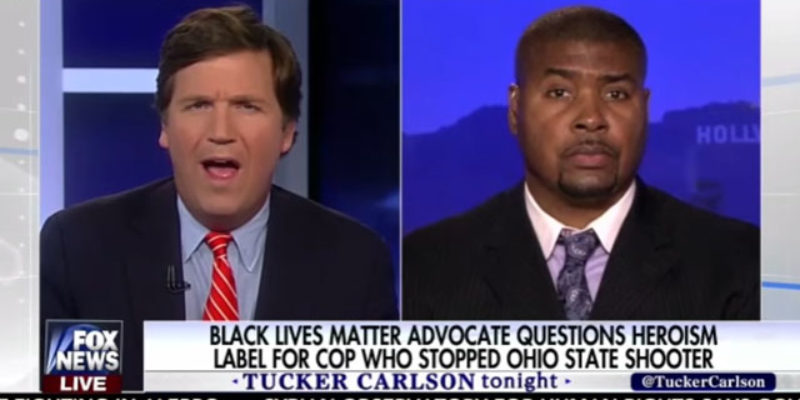 You may not have heard of Tariq Nasheed, and if not that’s OK. He’s not particularly worthy of note. Nasheed is an author of sorts and a documentary filmmaker, and he’s more or less a black racialist “philosopher” whose works would qualify as supremacist were he describing white people in the way he describes blacks.

So naturally, Nasheed went on Twitter after the Ohio State incident and expressed skepticism about the white campus police officer who shot the black attacker dead, in a way which questioned the propriety of that officer being hailed as a hero.

So white officer Alan Horujko who shot and killed the Black Somali stabbing suspect in Ohio is being paraded as a hero. Thats interesting

(Click the link to the tweet and you’ll see the full back-and-forth between Nasheed and the people who engage him, and it’s hilarious in its idiocy – in a “where do clowns like this come from?” sort of way.)

This made him a perfect victim for Carlson, who riddled him with questions he couldn’t answer and reduced him to stammering and babbling with little effort. It might not have been Carlson’s most devastating examination of a stupid leftist, but it’s up there.

Interested in more national news? We've got you covered! See More National News
Previous Article Why Is Trump Tweeting About Putting Flag-Burners In Jail?
Next Article The Baton Rouge Police Union Is NOT Happy About That Settlement With Black Lives Matter