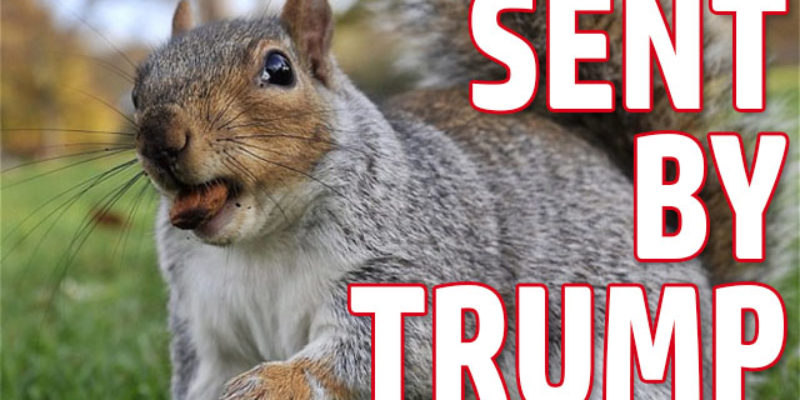 By now you’ve surely seen or heard about this… 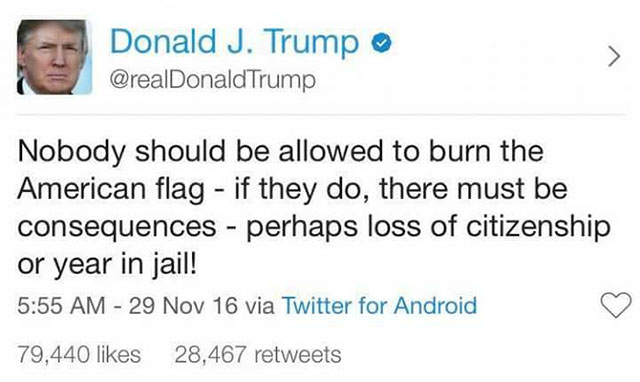 Naturally, the media is going bonkers over the whiff of “fascism” that has extended across the land since the president-elect put forth such an onerous and frightening proposal.

Which a decade ago Hillary Clinton also offered – and got 36 votes in the Senate for, most of which were from Democrats.

We love checking Memeorandum for reaction to items like this. Today was a perfect example….

Trump calls for jailing, revoking citizenship of flag-burners  —  Burning an American flag should be a crime, President-elect Donald Trump wrote on Twitter Tuesday morning, punishable by a forfeiture of U.S. citizenship or a year in jail.  —  “Nobody should be allowed to burn the American flag …
+

Of course, Trump is doing something else today. We already had a post on the Tom Price appointment at HHS. Which is a very big deal in terms of what it signals about American health care policy and the future of Obamacare.

The breathless Sarah Kliff, writing at the left-wing catnip site Vox, freaks out over Price’s appointment…

Price will arrive at HHS with a clear blueprint for what comes next. He is the author of the Empowering Patients First Act, one of the most thorough and detailed proposals to repeal and replace Obamacare. He’s the HHS secretary you’d pick if you were dead serious about dismantling the law.

It would replace the law with a plan that does more to benefit the young, healthy, and rich — and disadvantages the sick, old, and poor. Price’s plan provides significantly less help to those with preexisting conditions than other Republican proposals, particularly the replacement plan offered by House Speaker Paul Ryan (R-WI).

The biggest cut to the poor in Price’s plan is the full repeal of the Medicaid expansion, a program that currently covers millions of low-income Americans, which Price replaces with, well, nothing.

Most Republican replacement plans are still white papers rather than actual legislative language. This means they leave out a lot of key details, like who, for example, would qualify for a high-risk pool or how big tax credits would be. But Price’s plan is detailed. It is 242 pages long and lays bare exactly how he would repeal Obamacare — a program Trump is now putting him in charge of.

Kliff really goes nuts over the piece in Price’s plan which guarantees issue of health insurance to people with pre-existing conditions but allows insurers to charge higher rates for coverage to people who are seeking new policies – Price’s plan has a “continuous coverage” exemption from that, meaning that if you have a health insurance policy and you continue paying premiums on it you don’t get re-rated if you become diabetic or get lung cancer or whatever, but if you drop your plan and you want new insurance he’d allow insurers to price your risk into your premium. Under Obamacare that isn’t allowed, and it’s one of the primary reasons why the plan is in a “death spiral” – people who aren’t sick aren’t interested in buying health insurance which is essentially little more than a subsidy for sick people; if you don’t see it that way you obviously haven’t seen what Obamacare policies cost.

What Kliff also hates about Price’s plan is something anyone with a faint appreciation for economics will love. Namely, he proposes to change the structure of tax credits from one based on income in Obamacare – the poorer you are the more subsidies you get for Obamacare insurance – to one based on age. Why? Because if you’re older, you likely need health insurance more and it’s likely to be more expensive. Giving government subsidies to young people who aren’t sick and have little need for health insurance beyond some catastrophic coverage, who you’re forcing to buy a gold-plated policy in order to compensate insurers for cheap coverage on sick people, is an uncommonly stupid idea. And naturally it’s failing.

The real question is how much change Price, as HHS secretary, would be able to direct without input from Congress. We don’t totally know the answer to that just yet. But he’s going to make it his mission in life to wipe Obamacare out; that you can bet the farm on.

So the Democrats will be expected to mount a kamikaze mission to kill his nomination. That’s already apparent.

Democrats immediately signaled a fight over the pick.

Sen. Chuck Schumer, the incoming Senate Democratic leader, said Price has proven to be far out of the mainstream of what Americans want” for health care programs and services for seniors, the disabled and women.

“Nominating Congressman Price to be the HHS secretary is akin to asking the fox to guard the hen house,” Schumer said.

Price, a 62-year-old six-term congressman and orthopedic surgeon, has chaired the House Budget Committee for the past two years. A bookish conservative from the Atlanta suburbs, Price has worked closely with House Speaker Paul Ryan to assemble GOP budgets aimed at reducing the annual deficit.

They’re talking about Trump’s stupid tweet about the flag-burners and the fight he kicked up over the subject – which is a fight over nothing, because Trump isn’t going to bring a bill to jail flag-burners, and it wouldn’t pass anyway. What he’s done is gotten the Democrats on record as defending un-American losers who burn flags, and amid that distraction Price’s nomination isn’t covering the internet with screams about how Trump will be leaving the poor and the sick to die in the streets.

You can say it’s less than the most presidential thing in the world, and you’d be right. But it’s also a fairly smart tactical play. By the time Price’s nomination comes up the buzz surrounding him will be that there really wasn’t all that much outrage about his selection so why shouldn’t his nomination be approved?