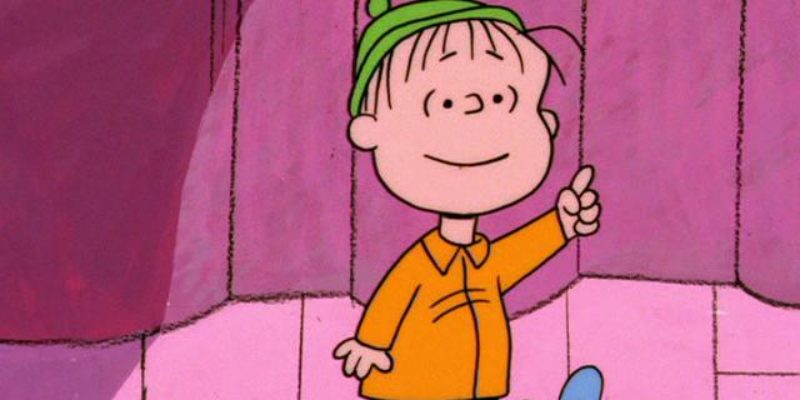 Uninformed grinches inhabiting Texas public schools are attempting to steal Christmas, and this year their victims are the least among these: Linus.

In case you need a reminder, or are just feeling a little grinchy yourself, Linus recited the origins of Christmas to Charlie Brown in this famous scene:

According to Fox News’ Todd Starnes, Texas teacher Dedra Shannon, obviously a fan of great Christmas shows, decided to add some Linus to her door and this was her result: 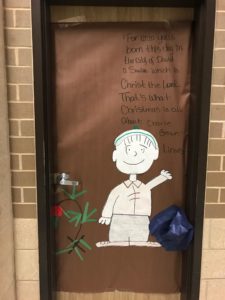 Nice, right? What a sweet depiction of a beloved American children’S icon.

No, said her principal.  In the principal’s view, by including a quote of scripture the scene violated the First Amendment of the US Constitution, namely the clause which prohibits the establishment of a state religion.

In my view, the principal got it wrong.

As Chief Justice Berger noted for the Supreme Court in Lynch v. Donnelly, 465 U.S. 668 (1984), “In our modern, complex society, whose traditions and constitutional underpinnings rest on and encourage diversity and pluralism in all areas, an absolutist approach in applying the Establishment Clause is simplistic, and has been uniformly rejected by the Court.”  In that case the Supreme Court upheld a religious crèche which formed a larger Christmas display (which included Santa Clause and a Christmas tree). The Court focused on the CONTEXT in which the display was made.  Just because the display contained a religious quote or the like did not automatically invalidate the display.  Instead, we should look at the context of the display. There, the Court focused on the primary intent of the display, finding that the primary purpose was not to advance religion.

The United States Department of Education has issued guidelines on the issue:

Public schools may not provide religious instruction, but they may teach about religion, including the Bible or other scripture: the history of religion, comparative religion, the Bible (or other scripture)-as-literature, and the role of religion in the history of the United States and other countries all are permissible public school subjects. Similarly, it is permissible to consider religious influences on art, music, literature, and social studies.

So, does the Linus door impermissibly advance religion on the unsuspecting students of Ms. Shannon’s class?  Probably not.

For starters, the display doesn’t attribute the words to the Almighty or any particular scripture.  No, the words come from what appears to be more objectionable to the Texas education authorities: Linus. If the teacher had posted the words as being those of Snoopy one can envision the Texas grinches’ collective heads exploding.

Plus, this is a quote from a movie.  A peanuts movie.  This isn’t The Passion we’re talking about or a life-like depiction of the birth of the Lord.  It’s Charlie Brown!  To be sure, it’s a quote of Biblical scripture, but that doesn’t necessarily invalidate it.  Remember that in Stone v. Graham, 449 U.S. 39, 42 (1980), the Supreme Court stated that “the Bible may constitutionally be used in an appropriate study of history, civilization, ethics, comparative religion, or the like.”

I simply can’t see how this is an overtly religious display designed to convince the children of Texas to accept a certain religion.

And even if it is overtly religious, so what? It’s Christmas. And that’s what Christmas is all about, Charley Brown.