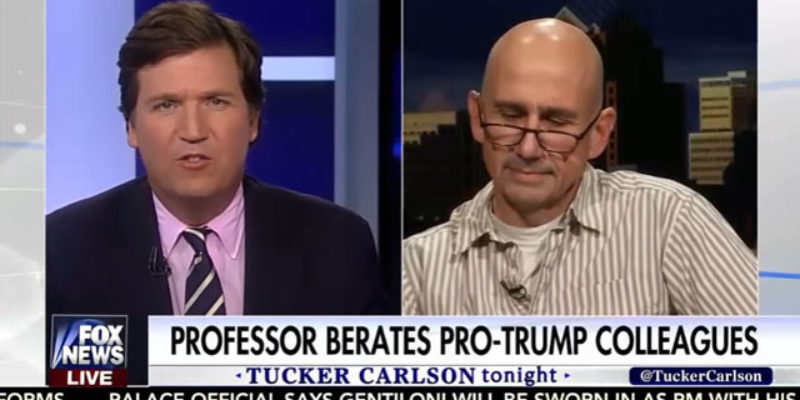 These episodes are an actual public service, as they do two things. First, Carlson’s style of handling stupid rhetoric from the Left is eminently polite – he doesn’t raise his voice, he doesn’t get emotional and he doesn’t become abusive other than an occasional snide comment. But what Carlson also does is demand that his victims defend the outrageous and stupid things they’ve done or said with actual supporting facts and arguments.

And second, because so few of them are capable of doing so Carlson is working his way through illuminating something which is more and more obvious to the naked eye as we go along, which is that the Left simply is no longer capable of making reasoned, logical, persuasive arguments. Two decades and more of attempts to shut down debate over false premises they’ve established, like for example the contention that to hold certain positions the Left disfavors establishes one as a racist, sexist, homophobe, Islamophobe, nativist or some other kind of bigot, has reduced them to little more than spouting those false premises as a substitute for actual arguments.

And when those premises are challenged by interlocutors who demand actual support for arguments rather than epithets and feelz, the Left simply cannot defend their positions.

The victim in this episode is SUNY Geneseo Professor Tony Macula, who wrote a Dear Colleague letter attacking the small percentage of his university’s faculty who may have voted for Donald Trump as supporting and enabling racism. Carlson gives this poor excuse for an intellectual seven minutes to offer a cogent defense for his accusations, and Macula fails atrociously.

None of which is a surprise, but it’s always interesting to watch a leftist wilt under examination of his positions.