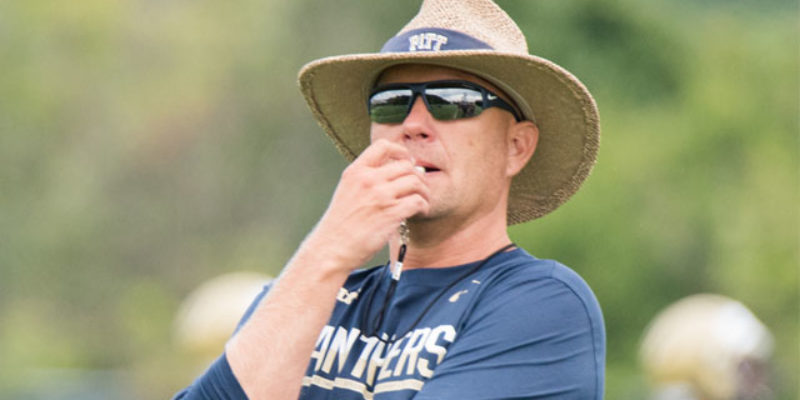 LSU is zeroing in on Pittsburgh’s Matt Canada as its next offensive coordinator and an agreement could be reached as early as Tuesday, two sources with knowledge of the situation told NOLA.com | The Times-Picayune on Monday night.

Canada has emerged as the leading candidate and is scheduled to meet Tuesday with first-year coach Ed Orgeron and the rest of the staff.

A source said Canada was always high on the LSU’s list, and he went to the top of that list when Lane Kiffin accepted the head coaching position at Florida Atlantic.

What kind of offense will Canada run?

“He can run everything,” said an LSU source.

Ross Dellenger of The Advocate…

The wait for Lane Kiffin has ended, and the LSU football team has quickly shifted its focus to Plan B: Pittsburgh’s Matt Canada.

Canada, a 44-year-old Indiana native, has emerged as a serious candidate for the position. LSU officials are expected to meet with the coach early Tuesday, setting up a potential announcement soon, a source confirmed to The Advocate on Monday night.

Much like Aranda, Canada runs a little bit of everything. He has used elements of the spread with single back and multiple tight ends or wide receivers this season. He has loved using the jet sweep and likes to set opponents up with it early in the game, then fake it and run up the middle. He has also used two back sets at Pittsburgh and at North Carolina State and uneven line formations, sometimes with six linemen. He loves deception and can be unpredictable. His offenses tend to get to the line of scrimmage quickly, but take their time and audible at the line.

Canada was one of five finalists for the Broyles Award that goes to the nation’s best assistant coach. The other four were defensive coordinators with Clemson’s Matt Venables winning it.

“In his debut season at Pitt, Canada has made a dramatic impact on the Panthers’ offense, which has been described by numerous observers as innovative, imaginative and fun,” a recent story on the Pittsburgh website said.

In 2016, Pittsburgh set a school record for points with 508 as the Panthers are No. 10 in the nation in scoring with 42.3 a game. Pittsburgh is the only team among the Power 5 conferences (Southeastern, Big Ten, Atlantic Coast, Big 12 and Pac-12) to score at least 28 points in every game this season. In a 76-61 win over Syracuse, the Panthers scored their most points since 1977. Canada’s Wisconsin offense was part of a 70-31 win over Nebraska in the Big Ten Championship game in 2012.

Canada’s offense has been balanced in 2016, gaining 2,757 rushing and 2,613 passing. Pittsburgh’s offensive line has allowed only nine sacks on the season for 0.75 a game, which leads the ACC and is No. 3 in the nation.

Having watched a few of Pittsburgh’s games as Canada’s name came up as a possibility for the job in the past few days, we can concur. A few observations…

Pittsburgh had essentially four weapons to work with this year, or at least they had four Canada was comfortable with. The premier weapon was the tailback, James Connor – who’s one of the best stories in all of college football this year seeing as though he blew out a knee in the season opener last year and, amid his rehabilitation on that knee, found out that he had Hodgkins’ lymphoma and spent six months in chemotherapy. Connor fought back from that and ended up having a monster season this year – 1,060 yards rushing on a 5.1 yard average with 16 touchdowns, and 20 catches for 299 yards and four more scores. Pitt had a great offensive line which paved the way for the offense to generate 230 yards rushing per game and a 5.4 yard average, giving up just nine sacks all year, but Connor’s great productivity was greatly aided by an offense which masked the fact he was the go-to guy extremely well.

But what one notices about Connor, as tough a runner as he is, in the games against Clemson and Penn State is he’s definitely not a particular breakaway threat. Not like a Derrius Guice is. Pitt’ best breakaway threat is a 5-8 wide receiver named Quadree Henderson, who’s somewhat akin to a Trindon Holliday – he averaged 31 yards a kick return with three touchdowns and 18 yards a punt return with another score – and Canada took advantage of him by running him on jet sweeps often. Henderson only caught 23 passes for 241 yards and one touchdown; he had 54 rushes for 555 yards and five more scores. Those jet sweeps did an enormous amount to open up the inside running game for Connor.

Canada had a good deep threat in Jester Weah, who had nine touchdowns and a 23-yard average on 34 catches, and a solid receiving tight end in Scott Orndoff (33-558, 5 TD’s), and his fullback George Aston was a short-yardage runner (21 carries, 73 yards, 5 TD’s) and good receiving threat (20 catches, 162 yards, 4 TD’s). What Canada did with Aston and some of the other tight ends and fullbacks, and Connor as well, was the shovel pass out of a zone read look – he burned Clemson and Penn State repeatedly with that play and it seems like in his offense it’s a substitute for the quarterback running. Peterman had 69 rushes, nine of which were sacks; he only carried the ball five times a game and most of those look like scrambles.

In short, this is an offense Danny Etling or Myles Brennan can definitely run. And it averaged 42 points a game with a collection of skill players that on net can’t even come close to competing with what LSU has. Guice would look at all the misdirection and masking of the base running game that Canada does and his mouth would water; if he could stay healthy he could absolutely be a Heisman candidate in this offense – Michael Turner was when Canada had him at Northern Illinois, after all, and so was Ball at Wisconsin.

The other thing one notices watching Pittsburgh’s offense is the eye candy. While LSU’s offense the last several years has been noticeably devoid of any pre-snap motion or shifting, with Canada it’s a constant feature. They’ll bring someone in motion across the formation and have him stop, then they’ll shift into an entirely different formation, and THEN they’ll bring another guy in motion again. By the time the ball is snapped the defense can’t keep any secrets; man or zone coverage, blitz or not, etc., and the quarterback and center have the best possible pre-snap reads with which to work. The offense doesn’t look all that complicated once the play starts, though it certainly has lots of tricks (this is a team, after all, which scored a touchdown against Virginia Tech on a reverse with a tackle carrying the ball and another touchdown against Georgia Tech on a screen pass to the same tackle), but playing defense against it has to be a maddening challenge given all the confusion that motion and those shifts can create.

In short, it’s a solid scheme. LSU needs some innovation on offense and they need to give opponents something to prepare for other than a nice collection of athletes. But as tempting as an Oregon or Texas Tech offense might be, at the end of the day LSU is always going to have marquee running backs and the running game has to be a main staple of what the Tigers do. Canada gives them that with what he’s running at Pittsburgh – while he’s anything but predictable he’s still run-oriented (on average Pitt ran the ball 42.5 times a game and threw it 24.6 times a game).

Canada is certainly a hot name, moreover, but he’s not exactly a young hotshot. He’ll turn 45 in January, and he’s been in coaching since 1994. Canada has been an offensive coordinator off and on since 1997, when he got the job at Butler, and since then he’s had it at Northern Illinois (2003), Indiana (2007-10), Northern Illinois again (2011), Wisconsin (2012) and NC State (2013-15) before Pittsburgh this year. Canada was turned out with the coaching staff when Bill Lynch was fired at Indiana (they were 19-30 in four seasons, with one bowl appearance), and he left Wisconsin after fighting with then-head coach Brett Bielema over the amount of freedom the head coach gave him. Interestingly, Canada got Bielema to allow him to call plays without interference for the Big 10 championship game that year and the result was a 70-point outburst.

But Canada was fired by head coach Dan Doeren at NC State after a 2015 campaign which saw the Wolfpack average 33 points and 413 yards per game (it appears that might have been a mistake, as this year NC State averaged only 26 points per game, though total offense actually went up to 420 yards per game). Doeren had been the head coach at Northern Illinois in 2012 when Canada was the offensive coordinator; Canada expressed surprise that relationship didn’t go well, but it appeared there was friction over the amount of playcalling freedom he had.

At Pittsburgh, head coach Pat Narduzzi has given Canada total control of the offense and the results have been breathtaking. Pitt went from 377.5 yards per game in 2015 to 447.5 this year, and from 28.2 points per game to 42.3.

What makes him interesting is Orgeron’s prior statements that he intends to let his coaches coach. If he’ll do that with Canada, with the talent LSU has on offense, it could work well.

And we should know by the middle of this week whether O, Canada is more than just a national anthem of some country north of here – or something with an immediate meaning to Tiger fans.