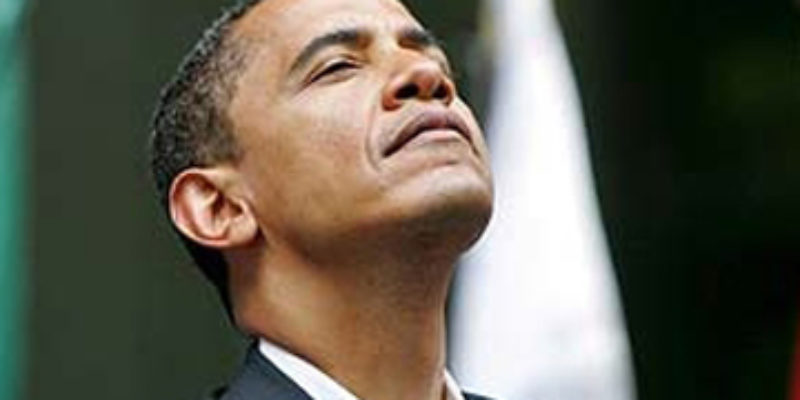 No presidency in my lifetime was greeted with such enthusiasm and unhinged hope as that of Barack Obama. At the start of his first term, a cult-like following had already developed among the intellectual and media elite. It was the dawn of a new age, marked by exuberant anticipation of justice, fairness, equality, peace, and sea-to-shining-sea happiness, all of it predicted as a certainty once you consider the sheer intelligence, erudition, and good intentions of the great man.

Obama campaigned on hope in 2008 and it helped turn out a large and diverse electorate, excited at the idea that this charming man who could be the hero of a feel-good movie would give us our happy ending. He spent the next years cultivating that image….. through it all, he radiated hope and racked up some impressive victories — passing universal health care legislation, killing Osama bin Laden, getting the federal bureaucracy largely working as it should again — that justified his heroic image.

Hope and change ended in frustration and fear. Now two months following the greatest political upheaval most of us will ever witness, we are seeing the dawning of a new reality: Obama failed. The supposed successes such as the Affordable Care Act have become a handful of dust, and we are left with a huge amount of executive orders and signed legislation that seem destined for repeal.

Eight years in office, and there’s not much to show for it. Economic growth never did take off. Hope and change ended in frustration and fear. The last month of the Obama years has been spent in a frenzy to do something, anything, important to secure his place in history: releasing prisoners, imposing new regulations, putting on the final spin.

What was the source of the failure? It was the same at the beginning that it was at the end. Despite his intelligence, erudition, earnestness, and public-relations genius, and the mastery of all the Hollywood-style theatrics of the presidency, Obama’s central problem was his failure to address the driving concern of all of American life: the economic quality of our own lives.

In other words, despite his hope and charm, his highly credentialed brain trust, his prestige cabinet, and all the enthusiasm of his followers, he did not end persistent economic stagnation. The movie has ended. We leave the theater with an empty popcorn-bag, a watery soda, and once again deal with the real world instead of the fantasy we watched on the screen.

Now, you can chalk this up to many factors but let’s just suppose that Obama and his team truly did have the best intentions going into this. What was the missing piece? He never understood economics and he had very little appreciation for the power of freedom to create wealth and prosperity.

The Greenbergs, not intending to make the same point, describe the problem:

His legacy regrettably includes the more than 1,000 Democrats who lost their elections during his two terms. Republicans now have total control in half of America’s states.

Why such political carnage?

Faced with the economy’s potential collapse as he took office, Mr. Obama devoted his presidency to the economic recovery, starting with restoring the financial sector. But he never made wage stagnation and growing inequality central to his economic mission, even though most Americans struggled financially for the whole of his term.

Which is to say that his failed economics agenda drove the party into the ground.

At the same time, Mr. Obama declined to really spend time and capital explaining his initiatives in an effective way. He believed that positive changes on the ground, especially from economic policies and the Affordable Care Act, would succeed, vindicating his judgment and marginalizing his opponents.

He truly did believe it would work, whereas anyone with basic economics understanding could foresee that the ACA would fail. Anyone familiar with the history of socialism would know failure was baked into the entire command-and-control apparatus.

Absent a president educating the public about his plans, for voters, the economic recovery effort morphed into bailouts — bank bailouts, auto bailouts, insurance bailouts. By his second year in office, he spotlighted the creation of new jobs and urged Democrats to defend our “progress.”

When President Obama began focusing on those “left behind” by the recovery, he called for building “ladders of opportunity.” That communicated that the president believed the country’s main challenges were unrealized opportunity for a newly ascendant, multicultural America, rather than the continuing economic struggle experienced by a majority of Americans.

Which is to say that he took wealth creation for granted, as if it were a machine that would run on its own without necessary fuel. His administration saw its job as the one the media and academic elite cheered on: achieving cosmetic gains for the gauzy causes of social justice, cultural inclusion, and progressive government management. To be sure, there are policy changes that could have been pursued on this front – such as ending the drug war and penal reform – but these were both too little and too late.

He never had a big idea, a mental framework for thinking about economic fundamentals. The first extended treatment I read of Obama’s economic outlook was from David Leonhardt in August 2008, based on a series of interviews with the candidate for president. As usual, Obama was compelling throughout. Concerning his actual views on economics, however, he became vague, defaulting back to a technocratic center that rejected both free markets and socialism.

A laundry list of policies is pretty much the whole of Obama’s economic thought. He never had a big idea, a mental framework for thinking about economic fundamentals. All the interviews in this period illustrate how brilliance does not come prepackaged with economic understanding. He simply had none.

Obama never figured out where wealth comes from, the contribution of freedom to its creation, the role of property rights in securing prosperity, much less how government controls and mandates hold back growth. Every time these ideas were brought up, he would dismiss them as Reagan-era fictions. Moreover, denouncing trickle-down economics always elicited cheers from all the fashionable people.

The mainstream of the economics profession has long rendered the problem of generating prosperity as a matter of engineering.He took office in 2009 in the midst of a financial meltdown. He had to deal with a fantastic mess of bailouts and monetary interventions that he could not begin to understand. He continued his predecessor’s policies, agreeing with Bush’s zero-tolerance policy toward an economic downturn, however brief it might have been. He packed his economic team with technocrats and bailout masters and never looked back.

To some extent, this was all understandable. The mainstream of the economics profession has long rendered the problem of generating prosperity as a matter of engineering. Scientific management of macroeconomic aggregates could manipulate outcomes, provided the right experts were in charge and given enough resources and power. Lacking independent convictions on the topic, Obama outsourced his knowledge to these mainstream conventions with all their pomp and conceit. They failed him and the rest of us completely.

Eight years later, in an April 2016 interview in the same venue, Obama seems just as lost on the topic. “I can probably tick off three or four common-sense things we could have done where we’d be growing a percentage or two faster each year,” Obama said. “We could have brought down the unemployment rate lower, faster. We could have been lifting wages even faster than we did. And those things keep me up at night sometimes.”

To this day, he still has no ear for the topic. Precisely how might he have brought down unemployment? How was he going to lift wages? There is no control room in Washington, D.C., that you can enter and turn some dial to lower unemployment and boost wages. If there were, he surely would have done that. The relation between cause and effect in economics continues to elude him.

In another interview in 2016, faced with failure in health care and jobs, his frustration on the topic yielded this bit of honesty. “One of the things that I’ve consistently tried to remind myself during the course of my presidency is that the economy is not an abstraction. It’s not something that you can just redesign and break up and put back together again without consequences.”

It’s amazing that he would have to “remind” himself that no one can redesign an economy. Still, it’s good that he figured out that much. Would that he has followed up further and earlier on the implications of that statement. He would then know that the government cannot create outcomes; it can only hinder them.

Despite his vast knowledge on seemingly everything, and endless amounts of charm to sell himself to the public, he missed the one crucial thing.In some ways, this highly educated man with impeccable credentials and all the right friends, was a victim of a system of education that suppressed the great truths about economics.

Despite his vast knowledge on seemingly everything, and endless amounts of charm to sell himself to the public, he missed the one crucial thing. He never understood wealth is not a given; it must be created through enterprise and innovation, trade and experimentation, by real people who need the freedom to try, unencumbered by a regulatory and confiscatory state. This doesn’t happen just because there is a nice and popular guy in the White House. It happens because the institutions are right.

That most simple lesson eluded him. Had it not, he might have turned failure to success. Instead of imposing vast new regulations, passing the worst health care reform in American history, saddling industry with endless burdens, he might have gone the other direction.

Obama wisely said at the DNC convention that “we don’t look to be ruled.” “America has never been about what one person says he’ll do for us,” he said. “It’s always been about what can be achieved by us, together, through the hard, slow, sometimes frustrating, but ultimately enduring work of self-government.”

It was supposed to be an attack on Trump. It might also be an attack on his own administration handled the economy. Would that he have seen that this is not just true in politics; it’s the core principle of economics too.

And so he leaves office, confused about what went wrong, worried about his legacy, alarmed at the destruction of his party, and fearful about the forces of reaction that his health care reform and persistent economic stagnation has unleashed. There is an element of tragedy here. It is the fate of a man who knew everything except the one thing he needed to know in order to generate genuine and lasting hope and change.

You can have all the highest hopes, best aspirations, vast public support, and all the prestige backing in the world. But if you can’t get economics right, nothing else falls into place.

Jeffrey Tucker is Director of Content for the Foundation for Economic Education. He is also Chief Liberty Officer and founder of Liberty.me, Distinguished Honorary Member of Mises Brazil, research fellow at the Acton Institute, policy adviser of the Heartland Institute, founder of the CryptoCurrency Conference, member of the editorial board of the Molinari Review, an advisor to the blockchain application builder Factom, and author of five books. He has written 150 introductions to books and many thousands of articles appearing in the scholarly and popular press.

Interested in more national news? We've got you covered! See More National News
Previous Article An In State LSU Commitment May Decommit In The Latest Fail For LSU Athletics
Next Article Environmentalists Bring Fight Against Oil And Gas Pipelines To The Atchafalaya Basin