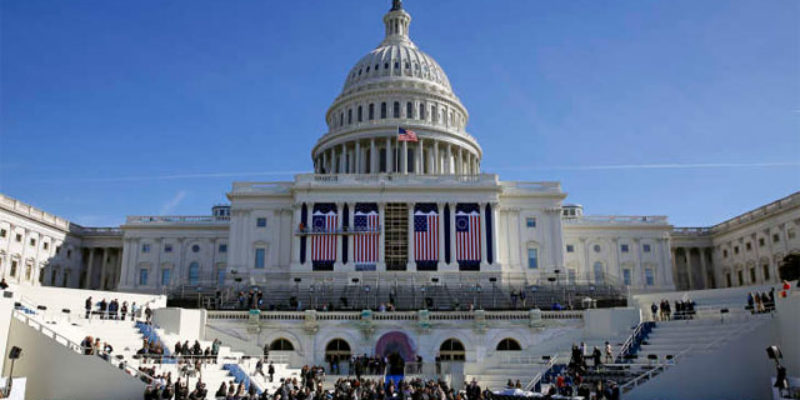 In the weeks before the presidential election, when it appeared another candidate was on the cusp of a historic this and a historic that, the media and the Democrats kept carping about the importance of the  peaceful transition of power.

While power was indeed transferred and Barack Obama is currently coping with being totally irrelevant for the first time since he was a state senator, there was little peaceful about the day or night Donald J. Trump became America’s 45th president.

The inauguration proved to be Donald Trump’s biggest mega-rally yet while turnout for his swearing-in was not on the scale of Obama.  How could it have been considering the constant media adulation of Obama and breathless promotion of the 2009 inauguration being the most important presidential swearing in of the past 150 years.

There was also the matter of Democrats, being smugly superconfident of Hillary Clinton’s victory, having booked hotel rooms well in advance of the election.

The lack of lodging availability drove prices through the roof and likely dissuaded many from being on hand to witness the resumption of GOP control of the White House.

Some folks found a way of making it work.  While waiting for the bus in suburban Maryland, I encountered dozens of folks who were staying at an RV park, many of whom were sleeping on a chartered bus.  That kind of determination to see their candidate become president is admirable.

Prior to 2017, I had attended both of George W. Bush’s inaugurations.

And while there was a Republican crowd at both, this was a very different type of GOP audience.  Those gathered to see Trump were not the Brooks Brothers mafia of 43 but a more casual group.

These weren’t the folks who hobnobbed at high dollar fundraisers but the very people who arrived at Trump rallies 3 hours early.  Seeing these people reminded me of the motley crowd that arrived in Washington to see Andrew Jackson’s swearing in.

And it is not a coincidence that the one presidential portrait Trump has hung in the Oval Office is that of Old Hickory, the great political disrupter of his age.

Trump did not wax philosophic in his inaugural address but gave a speech that was a true reflection of the man; he spoke like the contractor he is.  Trump laid out what would be the guiding principle of his administration- putting American interests first, from the economy to security.  Trump’s address was brief and to the point, far shorter than his standard stump speech.

Trump most significantly indicted the typical politician who promises big and doesn’t deliver, differentiating his unique background from his predecessors and setting a bar that he will have to energetically work to clear.  Unlike the flowery stuff that passes for the standard inaugural address, Trump was plainspoken and did not signal a pivot away from his campaign rhetoric.

Schumer trolled the crowd, particularly with his rant about income inequality (without recognizing his role and that of the previous administration in the gap) and a shout out for “gender identification.”  Schumer was rightfully booed by those in attendance.

Swearing In Now, Swearing At Later

In what has become an annoying if not grating pattern, we have seen public disturbances mar yet another Republican inauguration.  During Bush’s first swearing in, protestors had blocked access to the presidential inauguration parade to interfere with the ascension of an illegitimate (noticing a trend?) president.

For Trump, they went Yuge.

This time protestors blocked access to the swearing in itself, delaying people’s entry to secure corridors and then made mischief along the parade route, including executing a genuine riot.

The inaugural ball proved to be as problematic.  Unlike previous presidents, Trump opted for a scaled back ball arrangement, attending just three, two of which were in the same facility.  This allowed the protestors to converge on one centralized area instead of having to spread out as what happened during the Bush 43 inaugural balls.

DC police struggled (when they even bothered) to keep protestors out the streets (where they succeeded in creating traffic mayhem) and away from ball attendees decked out in formal attire.  The scene was chaotic and people had to endure hours of abuse from packs of protestors as they waited in an unsecured area to gain entry.

Republicans are exclusively subjected to this kind of unjustifiable harassment and if the media were truly objective, they’d invest some time and ink exposing who are behind these coordinated assaults.

What these goons did is no more patriotic or constitutional than what George Wallace did in front of a school house.

Turned Out for What?

On the day after the inauguration, Washington was flooded with women sporting pink knitted “pussy hats” for a major march and rally.

People also gathered in satellite protests across the globe.  But for what purpose?

Ostensibly it was for women.  But as reported by USA Today, not pro-life women (who will be gathered en masse in much larger numbers on Friday though they will receive far less coverage from the established media).

Between the head gear, the gratuitous use of the word PUSSY on placards and the display of vagina shaped costumes and sculptures, and very strange speeches delivered by a very old singer and a very disturbed b-list actress, the whole thing looked like a cross between a vulgar Mardi Gras parade and a “We Hate Trump” group pout session (when not taking selfies every ten feet or broadcasting their own historicity on social media) .

While the turnout impressed many Republicans who lingered in town, I should remind people that there was a similarly large pro-abortion march on the Washington Mall in 2004 and Bush won re-election by an even bigger margin.

Also the women who visited hailed from the moneyed echo chamber corners of the country and could afford the pricey fare of traveling to DC (in contrast to the Trump folks).

I would imagine few of the women wearing pink fuzzy sombreros resided at the College Park RV station.

If anything, the competing political events during inauguration weekend revealed the intense political divide in the country.

Interested in more national news? We've got you covered! See More National News
Previous Article Is John Kennedy Using The U.S. Senate To Beat On JBE And Run For Governor In 2019?
Next Article The Left Has Gone Completely Nuts Over Trump’s Anti-Terror Immigration Order, But…