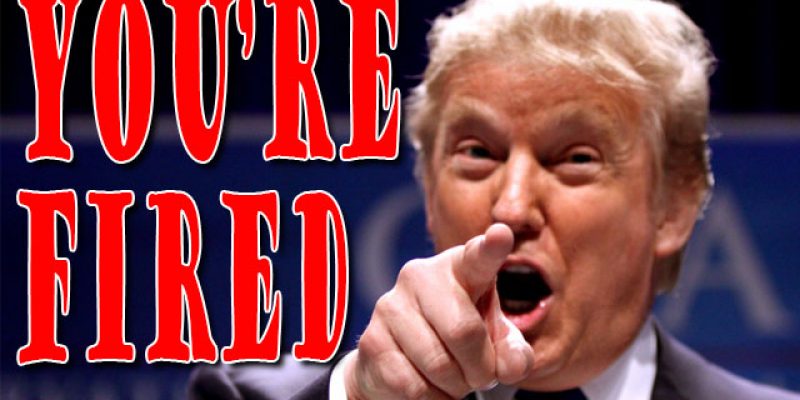 Statement on the Appointment of Dana Boente as Acting Attorney General

Ms. Yates is an Obama Administration appointee who is weak on borders and very weak on illegal immigration.

It is time to get serious about protecting our country. Calling for tougher vetting for individuals travelling from seven dangerous places is not extreme. It is reasonable and necessary to protect our country.

Tonight, President Trump relieved Ms. Yates of her duties and subsequently named Dana Boente, U.S. Attorney for the Eastern District of Virginia, to serve as Acting Attorney General until Senator Jeff Sessions is finally confirmed by the Senate, where he is being wrongly held up by Democrat senators for strictly political reasons.

“I am honored to serve President Trump in this role until Senator Sessions is confirmed. I will defend and enforce the laws of our country to ensure that our people and our nation are protected,” said Dana Boente, Acting Attorney General.

The Sessions confirmation vote is supposed to happen tomorrow. It will be interesting to see if (1) the Democrats attempt to filibuster the vote, and (2) if Senate Majority Leader Mitch McConnell breaks the filibuster.

ORIGINAL: Her name is Sally Yates, and she is the acting Attorney General while Jeff Sessions languishes in the confirmation process thanks to Chuck The Schmuck Schumer and the rest of the Democrats’ obstructionism.

And today, she took it upon herself to refuse her duty.

Yates, a veteran of the department who was appointed by former President Obama, said she is not convinced that the Executive Order is lawful.

“My responsibility is to ensure that the position of the Department of Justice is not only legally defensible, but is informed by our best view of what the law is after consideration of all the facts. In addition, I am responsible for ensuring that the positions we take in court remain consistent with this institution’s solemn obligation to always seek justice and stand for what is right,” she wrote in the letter.

Sally Yates is a Barack Obama appointee with close ties to Eric Holder, who appointed her as Vice Chair to the Attorney General’s Advisory Committee, and to Loretta Lynch, who made her Deputy Attorney General. Her tenure as interim AG was supposed to be over by now and she was supposed to be back in the private sector. But Schumer is holding up Sessions and that gives the Democrats a small opportunity in this case to hold up Trump’s policy – at least for a short time.

Trump’s aide Stephen Miller, who had a hand in crafting the order in the first place and is busily defending it amid a hostile Democrat media, blasted Yates as an example of how badly the Washington swamp needs to be drained…

There is nothing illegal about a temporary travel ban from countries whose citizens may pose a security risk. That’s why there was nothing illegal when Barack Obama imposed a six-month travel ban on Iraqis in 2011 for security reasons. And until 2016, Obama also held a tight line on refugees from Syria for the same reasons Trump wants to.

The administration has made changes to its policy according to input from its officials – for example, when Homeland Security director John Kelly deemed it to be in the national interest to bring green-card holders into the country, that was the end of the idea that green card holders from places like Iran and Libya would be shut out of America.

On the other hand, there is absolutely nothing unreasonable about subjecting green card holders from those seven countries to some scrutiny upon re-entry to America. Let’s say we have a 22-year old Somali national with a green card, and he leaves for his ancestral home for six months after having been a known associate of radical Islamists back in Minneapolis. Do you not want the authorities to satisfy themselves that the green card holder in question has not been undergoing terrorist training with Al-Shabaab while in Somalia before letting him back into the country? Of course you do. That’s what’s included in this order, in spirit if nothing else.

Should the order have been held up a week so that it could be passed through the administration’s top lawyers and the people at Defense and DHS? Yes. Trump’s justification, that any time wasted would allow “bad dudes” into the country, was too thin. As Andrew McCarthy noted at National Review today, he needs to do better than that.

The overarching problem is that the Trump administration opted for immediate implementation rather than giving travelers a brief notice period (say, a week or even a few days), so that people who had done nothing wrong were not sandbagged. Through no fault of their own, they were detained or denied entry and put on a plane back to the country from which they had come. This seems inexplicably unfair (and, as I’ll address in a bit, strategically foolish).

Even if you accept, as I do, that the inadequate vetting of aliens who come to our country is a serious security problem, surely the imposition of temporary restrictions (in anticipation of more refined restrictions to come) could have waited a few days. President Trump has been issuing orders since a few hours after he was sworn in; if the threat situation is such that he could afford to wait a week to issue this EO, then there’s no reason he couldn’t have waited another week to give government agencies time to prepare, and foreign travelers a chance to alter their plans.

That said, the Attorney General’s job is to defend the president’s orders where possible, but where impossible the AG has a duty to seek to make those orders defensible. If there are parts of the immigration order which need alteration, then she needed to propose them – quietly. After all, Sally Yates is, until Sessions is confirmed, Trump’s lawyer in the federal government. Unless she believes the entire policy is unlawful, which is illegitimate but if that’s her position she should resign, she has a duty to mitigate what legal problems the White House might run into. Not to sabotage his policy.

Which she has done. And she ought to be fired with the maximum amount of theater possible.