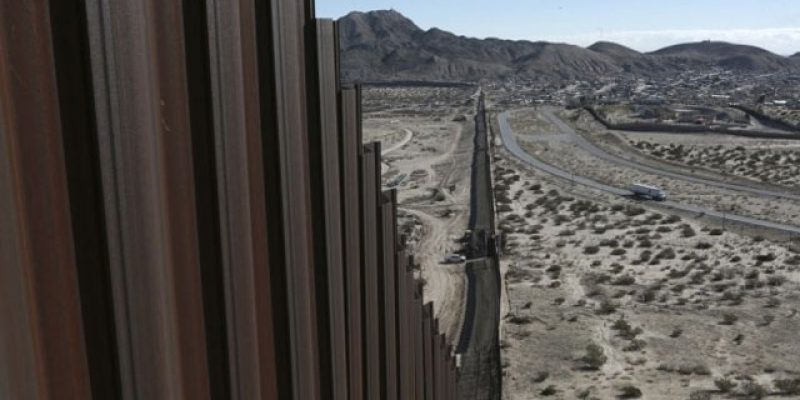 During his unconventional race for the White House, President Donald Trump made many campaign promises to the voters. In his dozens of rallies and interviews, Trump often pledged that he would “Drain the Swamp” in Washington D.C. and implement “Extreme Vetting” of refugees trying to immigrate into the United States and, of course, pursue his overall campaign theme to “Make America Great Again” as President.

While these pledges were popular with his supporters, one stood above the rest, “Build the Wall” along the southern border of the United States with Mexico. This slogan really energized Trump crowds throughout the country and for good reason. For years, Americans have heard presidential candidates pledge to “secure the border,” but it was never backed up with concrete action.

Finally, in Donald Trump, the United States has a President who is following through on his campaign promises. On Wednesday, Trump signed an executive order authorizing the construction of the border wall. He also reiterated his vow to make Mexico pay for the wall. This stance led the Mexican President Enrique Pena Nieto to cancel his planned visit to the White House next week.

Trump’s order is the most robust border security measure since the “Secure Fence Act” of 2006 was passed by Congress and signed by the President George W. Bush. Unfortunately, the funding was never allocated to finish the 700 miles of double fencing mandated in the law. In fact, only 36.3 miles of double fencing was constructed with the remaining areas secured by inadequate measures such as single fencing and vehicle barriers.

For decades, our southern border has remained basically wide open, enticing millions of illegal aliens to enter the United States and join the workforce while receiving tangible benefits provided by American taxpayers. Ironically, many of these taxpayers have been displaced from their jobs by illegal aliens who work for a lower salary, but receive tax free government assistance.

While most illegal aliens come to the United States to take advantage of better work opportunities, a significant portion are lured to this county to commit crimes. Per a Fox News survey, 13.6 percent of criminals who receive a sentence are illegal aliens, although they constitute only 3.5 percent of the U.S. population. President Trump frequently highlights the families of victims who have been killed by illegal aliens. This tragedy is made much worse by law enforcement officials in sanctuary cities that refuse to turn over criminals who are illegal aliens to federal immigration agents.  Sadly, too many innocent people have been killed because of a reluctance of our local government officials to follow the law.

On Wednesday, Trump not only ordered “the immediate construction of a physical wall on the southern border,” but he also vowed to withhold funding for sanctuary cities. On Friday, Trump signed additional executive orders to tighten restrictions on refugees trying to enter the United States. In addition, the issuance of visas will be suspended for citizens of seven majority Muslim nations, including Libya and Syria, that are tied to terrorism.

In total, these actions are important to the millions of Americans who have been demanding action for many years. For the skeptics, it will only become reality when the wall construction begins.   Regarding the wall, the United States will pay for the construction initially and use our leverage to force Mexico to reimburse us for the cost, estimated at between $12 and $15 billion.

One idea that was proposed this week is for the United States to institute a 20% border tax on Mexican imports; however, there are plenty of other potential funding mechanisms.

Along with the many economic and crime fighting benefits that will result from a secure border, there will also be enhanced homeland security against the threat of terrorism. A wide-open border is an invitation for enemies of the United States to launch terror attacks within our borders.

For these reasons and more, a border wall is vital for the security and economic prosperity of the United States. Congratulations to President Trump for taking a key first step to fulfill his campaign promise while keeping the pressure on Mexico to take responsibility for the crisis at the border. As the President tweeted on Friday, “Mexico has taken advantage of the US for long enough.”

Thank goodness, real change is finally here and not a moment too soon.