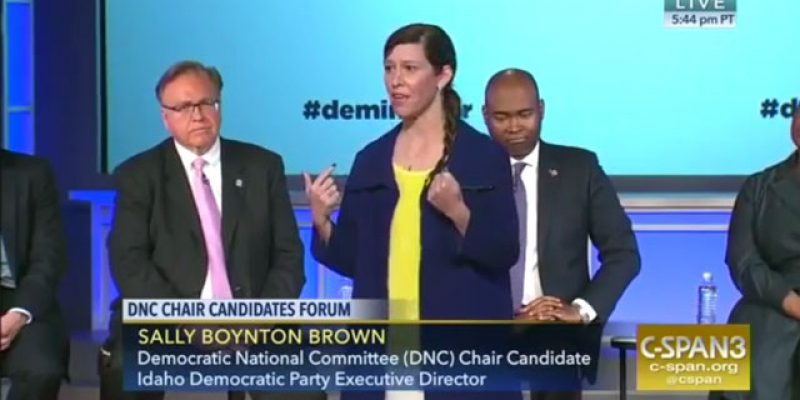 This clown’s name is Sally Boynton Brown, and she is currently the executive director of the Idaho Democrat Party, and she might be America’s pre-eminent political panderer.

There was a debate last week among the candidates for the position recently held by Debbie Wasserman Schultz and then Donna Brazile on an interim basis, and that debate showed just how far gone the Democrats are in the wake of Donald Trump’s electoral victory.

Among those candidates, three – Rep. Keith Ellison of Minnesota, former Fox News chew-toy Jehmu Greene and South Carolina Democrat Party chair Jaime Harrison – are black and one – former Labor Secretary Thomas Perez – is Hispanic. Only two, Brown and New Hampshire Democrat Party chair Ray Buckley, are white. There has been a certain amount of overt racism amid the jockeying for the job, with political consultant and CNN pundit Symone Sanders, a former Bernie Sanders spokeswoman, suggesting that “we don’t need white people running the Democratic Party right now.” That statement was fuel for a rather bizarre interview between Greene and Tucker Carlson last week, in which Carlson tried to get Greene to repudiate it and was unsuccessful. It’s clear that the Democrats aren’t all that interested in ending racism; their plan is to put it under new management.

As you can see, that doesn’t just apply to the black candidates. Brown, who is white and nevertheless wants to run the Democrat National Committee, is here trying to sell that party’s racial-minority base on something like “Don’t hate me because I’m white, that’s my job.”

Sally Boynton Brown is a 2005 graduate of Boise State University (it only took her nine years to graduate with a BA in Communications) whose work experience outside of politics consists of a six-year stint right out of college as a consultant for Clarity NOW, a career coaching firm it’s not clear she didn’t own. Along the way she worked on a number of mostly-unsuccessful political campaigns in deep-red Idaho, but did manage a successful campaign for a Democrat state representative, Phylis King, in 2008. By 2011 the Idaho Democrat Party had hired her, first as a field director, and then as communications director, and then in 2012 as executive director.

Based on those qualifications it’s silly for her to even be considered to run the whole Democrat Party, and she knows it. So that’s why she resorted to the desperate pandering she did – in classic lefty beta fashion she’s hoping that her purported empathy masks her lack of accomplishments.

Sally Boynton Brown isn’t going to win the race she’s in, for the exact reason she embarrassed herself last week. At this point the Democrats are fully immersed in social justice warrior nonsense and that means touchy-feely white liberals need not apply for leadership even if they are actually qualified for the job. She could have chosen to focus on the need to put racial payback games aside in favor of finding ways to appeal to a majority of Americans and win elections, but it’s clear nobody on that stage is interested in those things.

There is no prospect of that party finding its way out of the wilderness given its current posture. Without a major realignment the Democrats are doomed. That’s a good thing, by the way, because to put these people in charge of the country for any more time than the eight years they’ve just had would be a suicidal mistake.