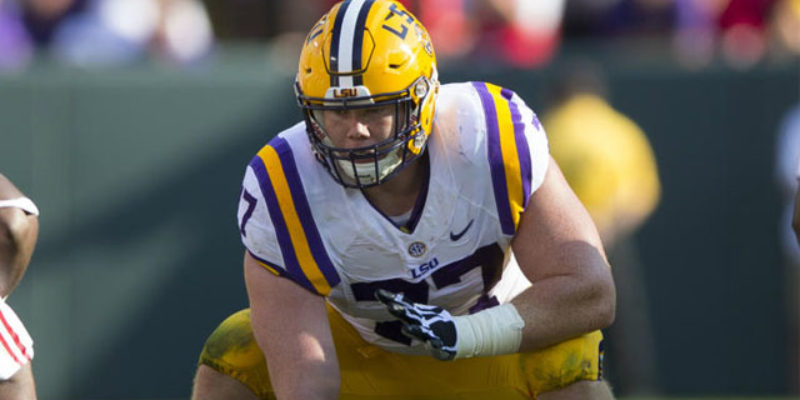 These well-written paeans to the LSU Nation upon the conclusion of a successful college football career are becoming their own little literary niche, and they’re beginning to comprise a piece of the Louisiana cultural landscape.

First was a blow-you-away letter Tre’Davious White wrote back in December, and now this, from LSU’s graduating center Ethan Pocic. White, from Shreveport, had a bit more local flavor – but on the other hand, Pocic, who came to LSU from Lemont, Illinois, sounds like he’s gotten pretty local himself…

On October 6, 2007, I was just a 12-year old watching No. 1 LSU play No. 9 Florida on TV. I can still remember how impressed I was by the competition and atmosphere of SEC football. As I watched the whole game with my eyes glued to the television, I knew that if I ever had the opportunity to play in the SEC I would take advantage of it. At the time, I had no idea that five years later LSU would become my new home.

When I first arrived at LSU as a 17-year old from Lemont, Illinois, I didn’t really know what to expect, and it was definitely a culture shock. LSU took me in with open arms and showed me the Southern way.

I learned to eat and love crawfish, say “y’all”, and throw beads at Mardi Gras parades. I am thankful to my teammates/friends, coaches, weight room staff, athletic trainers, academic support staff, and LSU’s great fan base for supporting me every step of the way. I wouldn’t have been able to graduate college and became the football player I am today without their support.

I can honestly say after living here through four football seasons that I am now part southerner and have loved every second of it. I will never forget what it felt like to play in front of 100,000+ fans in Death Valley on Saturday nights. As a kid, I never would have thought I would have the privilege to play for and graduate from LSU.

Coming here was the best decision I ever made and I am so thankful for being a Tiger for life.

Thank you LSU and Geaux Tigers!

One thing which appears true about the LSU football program despite some of the heartbreaking underachievement of the last few years – underachievement which certainly isn’t the fault of White or Pocic, both of whom had exemplary LSU careers (though Pocic, at 6-6, really should have been playing left tackle rather than center) – has been that the culture of the program has strengthened. LSU generally recruits and develops really good kids, and by and large they do a terrific job representing the program and the university even long after they’re done at the Ole War Skule.

What’s needed is for the coaches to build on that culture and attach some championships to it. We need more Whites and Pocics. Keep ’em coming.

Interested in more national news? We've got you covered! See More National News
Previous Article VIDEO: Tucker Carlson Destroys Gun Grabber Who Claims Gun Control Works
Next Article So What About Those Storm Gates At The Rigolets And Chef Pass?