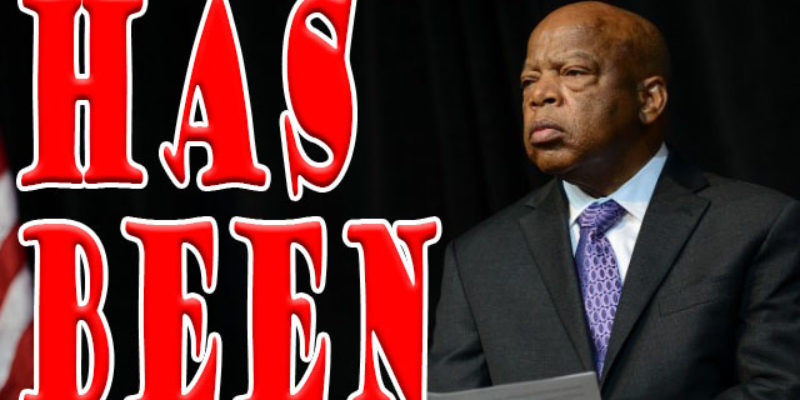 …I did an American Spectator column yesterday which went up this morning on this subject. The basic gist is John Lewis doesn’t rate the sacred cow status the media and the Left (but I repeat myself) are affording him – not after his performance of recent vintage.

But John Lewis is no longer that tough-as-nails young man fighting for truth and the American ideal. He hasn’t been for a very long time. Somewhere in the 30 years he’s spent as the congressman for most of the city of Atlanta the truth has been lost, and now Lewis is no different from the rest of the Congressional Black Caucus — he’s a petty, squabbling partisan opportunist clinging to a false moral superiority most never earned and that he himself has squandered.

The CBC claims to carry the mantle passed to it by the civil-rights movement Lewis fought for, but Martin Luther King would have had very little interest in an organization whose leader would boast of his willingness to “kick somebody’s ass” over the propriety of displaying a painting depicting policemen as pigs with pistols in the Cannon tunnel on Capitol Hill.

And King most certainly would not have appreciated the specter of Jim Crow being misused, as Lewis did last week, to accuse Jeff Sessions of bringing back whites-only drinking fountains should he be confirmed as Attorney General. That rhetoric may be clothed in King’s accomplishments, but it makes a complete mockery of them. What John Lewis’ idiotic hyperbole indicated was that the civil-rights movement his head was split open for in Selma had such flimsy accomplishments and such meager effect on American culture that we are but one bad hire for a presidential Cabinet away from wiping out 50 years of societal evolution. Anyone with that little faith in his own accomplishments should surely be expected to retire in disgrace from public life, no?

But such irresponsible statements are par for the course from Lewis. He justified his boycott of Trump’s inauguration by claiming it was brought about by a Russian conspiracy and that Trump was “not a legitimate president.” This could be considered mild by Lewis’ standards; after all, he claimed that John McCain and Sarah Palin in 2008 were “sowing the seeds of hatred and division” in a way reminiscent of George Wallace — rhetoric he trotted out again to describe Trump last year.

And just in case you think Lewis ought to get the benefit of the doubt thanks to his exploits a half-century ago, let’s remember that the single most persistent item of racial inequality in America today lies in education. Schools in predominantly black areas are nearly uniformly inferior to those in predominantly white areas, and the result is black children are commonly trapped in failed government schools which rob them of opportunities to learn needed skills for social and economic mobility.

John Lewis, as a member of Congress, voted against both the inception of the D.C. Opportunity Scholarship program, the first real effort to promote school choice for predominantly black working-class and poor people, and its reauthorization. Lewis also voted to kill a bill in 1997 to provide states the power to use federal funds for school vouchers if they so chose. He has a 91 percent lifetime score courtesy of the National Education Association; meaning he’s as reliable a vote in favor of a union and against the interests of public school kids, many of whom are black, as there is in Congress. That’s how important the fight for equality is to the modern-day John Lewis.

What I neglected to mention in that dissertation on Lewis’ self-transformation from civil rights warrior to lying partisan hack was the slander of Tea Party activists amid the Democrats’ Obamacare vote back in March of 2010, when he accused protestors of calling him the n-word as he ascended the Capitol steps. There were hundreds of people holding up phones to take video of the hullabaloo that day, including people who were standing very near where Lewis passed, and nobody captured any such evidence. Andrew Breitbart offered to pony up $100,000 to anyone who could prove the slur; no takers.

I also neglected to mention that Lewis also boycotted George W. Bush’s inauguration in 2000, which gives a pretty good glimpse into Lewis’ credibility.

Lewis has spent the back half of his career as an elected official calumnizing those who disagree with his politics. Whatever Trump might do to him via Twitter or in a press conference is fair game as a result, and frankly it’s time for him to be pushed out of politics after 30 years in the House of Representatives. Nobody ought to be there that long in the best of circumstances and it’s fairly obvious Lewis has gone septic in his seat. He doesn’t solve problems and he’s not accountable for either his words or his deeds. It’s not like Atlanta is better off for having had this man as its congressman (he doesn’t represent all of Atlanta; just the northern three quarters of it) for most of the last three decades and that city is certainly not better off for having him as its congressman now.

Is Trump’s Twitter a liability? More or less, yes. Were his tweets about Lewis written as well as they could have been? No. But what Trump is being criticized for is his having dared to speak ill of John Lewis, and that in itself is asinine. As I said at the Spectator, Lewis slaughtered himself as a sacred cow some time ago. He and his unaccountable lies are completely fair game.