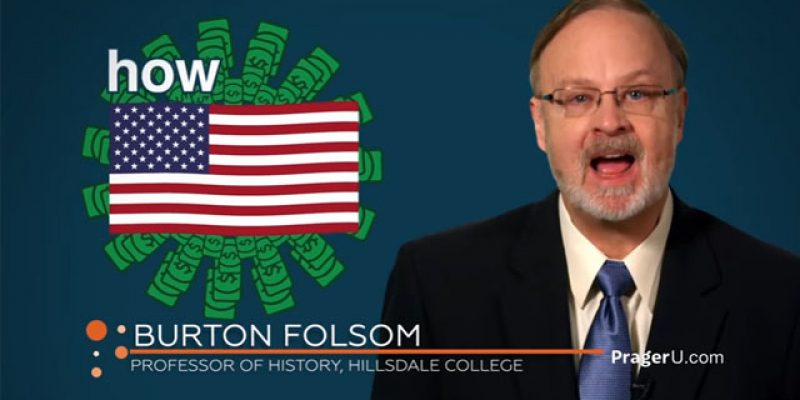 Hillsdale College professor Burton Folsom is a great storyteller with even better perspective on the stories he tells, so it’s a rare treat to have him holding forth on American history and its lessons. And in this Prager University video he offers three examples to show that it’s not our government which has created the prosperity we enjoy – in fact, that prosperity has mostly come in spite of the public sector rather than because of it, and at best it’s been when the feds and the states have gotten out of the way that true innovation and profit have come.

Most people don’t know that initially the fur trade, the telegraph and trans-Atlantic steamship travel were government-run the way Amtrak, the Post Office and the Corporation for Public Broadcasting are now. And just like those three current examples, the 19th century ventures were bombs and ultimately put to pasture by entrepreneurs who made legendary fortunes with them – as in the Astor, Cornell and Vanderbilt fortunes.

Anyway, one wonders if the public sector were to get out of the way what the market could do with low-cost mail delivery (which FedEx and UPS inch closer to all the time, and Amazon could enter into at some point with those drones on their drawing boards), whether a private company could do for passenger rail what Burlington Northern Santa Fe, Norfolk Southern and Kansas City Southern do for freight rail, and how much of PBS and NPR’s programming can’t be eaten up by either the cable networks, online streaming services or satellite radio. The guess here is if the feds got out of those businesses nobody would miss them much and there would be a lot more money made on the enterprises in question.

After all, that’s what history teaches us.