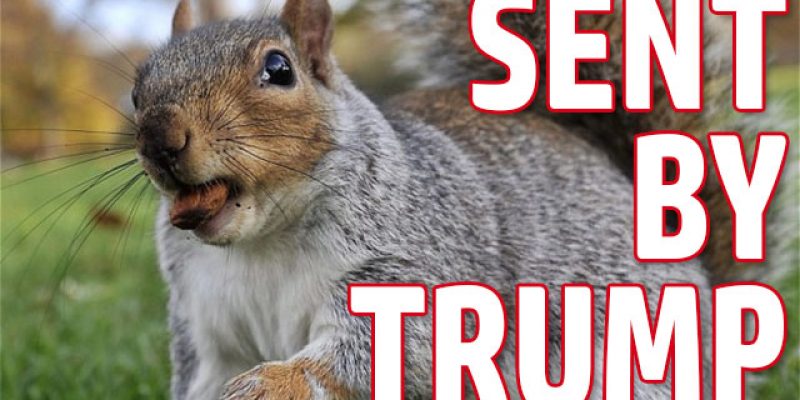 Michelle Malkin routinely used the analogy of squirrels to describe the Obama administration’s ability to distract the public’s attention from substantive actions it was taking by creating distractions. That administration was quite good at hiding the ball from the public.

But compared to Donald Trump, Barack Obama was a mere piker.

Malkin might say that Trump is a master of squirrels, because it seems like daily that the new president has set loose distractions the media has been powerless to avoid — and major would-be controversial actions he’s taking are going largely unreported by a hostile media.

Take, for example, the weekend’s controversy surrounding the size of the crowd at Trump’s inauguration. The president sent his press secretary Sean Spicer out on Saturday to spew outrage at bad media coverage of the throng at Friday’s event; specifically, photographs of the crowd on the Washington Mall laid side-by-side with analogous shots of the Obama inauguration in 2009 which made Trump look like less of a success. Spicer fired out at those media organs publishing such comparisons, alleging that the photographs from Friday were taken earlier than the time of Trump’s taking the oath of office and therefore were unfair.

And then Spicer went further, alleging that Trump’s inauguration audience was the largest in history between people watching it in person and eyes glued to a screen. This was probably a bit of overreach; Obama’s in-person crowd appeared to be larger than Trump’s, though not by remotely as much as CNN and other media entities were selling, and Nielsen says Obama’s 2009 inauguration had 37 million TV viewers, compared to 31 million for Trump’s inauguration. It is possible, given the rapid rise in popularity of online streaming media from 2009 to today, that there may have been an additional six million viewers of the inauguration Nielsen didn’t catch. That would make what Spicer said at least arguably correct, though one could say he missed the mark by aiming for such a grandiose claim when the real meat was the comparison between Trump’s actual crowds and the media’s claims.

Particularly given another falsehood Spicer complained about; namely, a fraudulent report by Time magazine that a bust of Martin Luther King had been removed from the Oval Office by the assumedly racist new president.

The objections weren’t baseless. Coverage of Trump by the Democratic media has been shockingly, if not surprisingly, biased since long before Election Day, and Spicer’s charge is clearly to show as much contempt for his tormentors as they show to his boss. Rightfully so.

But it’s all squirrels. The hacks covering Trump are as lazy as they are partisan, so feeding them clickbait such as manufactured controversies over inaugural crowds is a guaranteed way of keeping them occupied while things of real substance are done.

I noted that Trump kept the squirrels coming by saying Monday that if not for “3-5 million” illegals voting in California and other places he would have won the popular vote. The media is apoplectic about that claim, which he’s made multiple times since the election, and can’t stop calling it “baseless” and “without evidence.” They’re screeching that Trump is undermining public confidence in our electoral system, which is fairly hilarious since it’s their pals in the Democrat Party who have been committing the voter fraud Trump is using to make his claims and it’s the Democrats’ and media’s denial of that fraud which gives Trump the ability to be believed by a significant share of the population. That confidence gap has existed for a long time; Trump is just the first one to harp on it.

And harping on it forces the media to spend its time on illegal Mexicans in the voting booth rather than the sea change Trump is making to American government with the executive orders he’s handing down. Again, from the column…

And while the ink-stained curs were scampering after squirrels on the White House lawn, Trump was inside signing executive orders of such magnitude as to thoroughly dismantle the Obama legacy.

The Dakota Access and Keystone XL pipelines will now be built.

The federal government will no longer fund abortions performed in foreign countries.

America is withdrawing from the controversial Trans-Pacific Partnership treaty.

U.S. airstrikes severely wounded ISIS leader Abu Bakr Al-Baghdadi and turned several of his advisers into scrambled egg while trapping ISIS forces on what is for them the wrong side of the Euphrates River in Mosul, in a rapid escalation of the fight against the jihadist network.

Ajit Pai, the foremost critic of Net Neutrality at the FCC, is its new chairman, meaning the free market now has a friendly majority in that body again.

Trump froze all federal government hiring “except for the military.”

The Centers For Disease Control’s planned Climate and Health Summit will not be happening.

Trump is doubling down on the illegal Mexican voters, because today he’s signing an order to build the wall along the Mexican border and another to halt immigration from Syria, Iraq, Somalia and a few other terrorist breeding grounds. Another way to describe today’s events is that Trump will be making good on a couple of his most outlandish campaign promises in a substantial way, leaving the Democrats and the media absolutely slack-jawed in his wake.

And so, he’s keeping them busy with a bushy-tailed arboreal rodent.

I will be asking for a major investigation into VOTER FRAUD, including those registered to vote in two states, those who are illegal and….

even, those registered to vote who are dead (and many for a long time). Depending on results, we will strengthen up voting procedures!

Please understand, the concerns about illegal immigrants voting are legitimate even if the claim that 3-5 million illegals voted might be over the top. Illegals do vote in American elections and it shouldn’t happen; citizenship ought to mean something in the greatest country on earth. And scrubbing dead people off the voter rolls, which is something Democrats are very peculiar in their constant opposition to, is a very necessary bit of electoral hygeine – if you have friendly commissioners at the polling place and a good list of names on the voter roll of people you’re sure won’t show up because they’re dead or have moved away, you have all you need to stuff the ballot boxes and potentially turn a tight election.

But Trump knows his executive orders on Syrians and the border wall are far more weighty. He’s using the voter fraud stuff to bait the media and open the way to getting the tough stuff done.

When he starts complaining that the Obamas stole all the White House silverware on their way out, that’s when you know the really heavy policy shifts are coming.