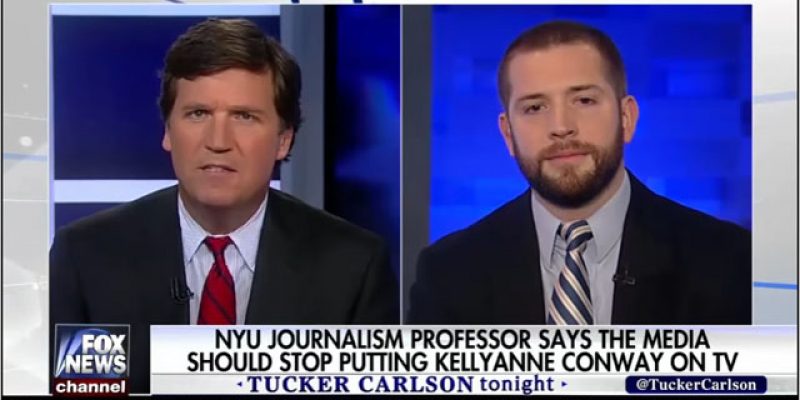 Here’s some vintage Tucker Carlson, as he opens last night’s show with a hack from the website Elite Daily named John Haltiwanger who wrote that the Trump administration is “unprecedented” in its lies and that its functionaries, most specifically Kellyanne Conway, be “shunned” by the mainstream media.

Which is a classic case of #ThisIsWhyYouLost, as one of the things it’s clear the American people have had quite enough of from the coastal-elite Left is the attitude that if one’s affect or opinions are not pleasing to them then one no longer has the right to engage in the conversation. They’ve been telling the rest of the country “Shut up!” so long that they’ve lost the ability to persuade anyone, and this is one reason why their political party has been reduced to a rump organization holding sway almost exclusively in safe enclaves in large cities and academia.

Not surprisingly, Haltiwanger fares poorly against Carlson, who is comfortable engaging with even the weirdest of those with whom he disagrees. Carlson doesn’t particularly take the bait when Haltiwanger tries to recount all the awful things Trump’s team has said – he refuses to defend any of them and keeps the conversation on Haltiwanger’s suggested response, and then when Haltiwanger’s suggestion that Trump’s reference to patriotic devotion is reminiscent of Nazi Germany or North Korea comes up in the conversation things become entertaining.

At some point these people are going to begin to realize that going on Carlson’s show is bad for their self-esteem, and it’s going to become harder and harder for him to find guests.

Interested in more national news? We've got you covered! See More National News
Previous Article The Master Of Squirrels Is Working Overtime Today
Next Article Reason.tv’s Mini-Documentary On Thales Academy Is A Must-Watch For Everyone Interested In Education