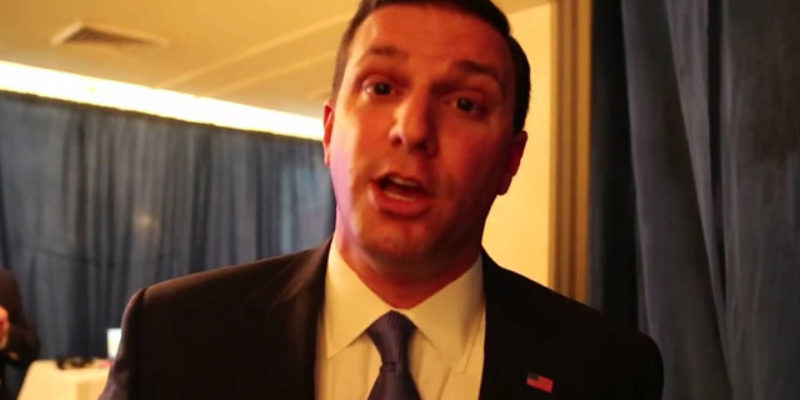 It’s a fairly obvious prospect at this point that Mike Yenni, the embattled parish president in Jefferson Parish, has virtually no shot at re-election. When you are at least somewhat credibly accused of being a gay pedophile, or a wannabe member of that rather unpopular sexual genre, it’s hardly going to ingratiate you with people in a relatively traditional, conservative suburban place like Jefferson is.

It’s been a curious thing to watch Yenni attempt to wind his way through the scandal in an attempt to weather it, only seemingly to make things worse at each turn; he seems to be vying with Troy Brown for status of the most embarrassing elected official in the state.

But so far there hasn’t been a true test for Yenni to find out how deeply he’s damaged himself. That will change tomorrow. Here’s a memo Yenni sent out calling for the formation of a task force aimed at addressing the rapid decline of Jefferson’s public schools and announcing a press conference to that effect… 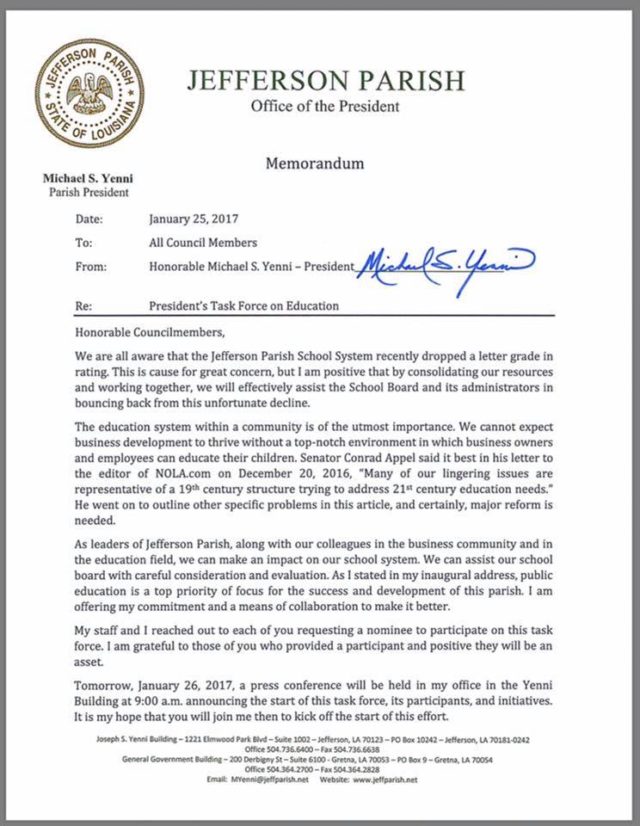 He’s trying to get each member of the Jefferson Parish Council to nominate someone for the task force. Politically that’s not a terrible idea; if you’re Yenni and you present something which seems obvious as an issue all people of good faith could get behind, and you get the council members to agree, then you can make a credible case for having weathered the storm and that you can be an effective leader even if you give people the creeps and after all you didn’t do anything illegal.

Which is a debatable proposition, at best. But what Yenni is likely to find out is the debate won’t last long. We know this because it doesn’t look like the Parish Council is going to be overly cooperative. Here was Council President Chris Roberts’ reaction…

Today I was informed of a Task Force that the Parish President intends to establish for the purpose of addressing educational school based issues.

I want to be clear that I have not submitted a name for this Task Force nor do I plan to do so. My office will also not be attending the press conference tomorrow.

Last fall following his public disclosures the Jefferson Parish School Board requested the Parish President not to be present at any school campus or attend any school functions. Although I believe as a former school board member education is a high priority, I cannot in good faith engage or participate in this endeavor.

Given the recent occurrences of major crime in areas of the parish, I believe we need to let the Jefferson Parish School Board do the job they were elected to do and parish government needs to be focused on maintaining a high quality of life with a superior public works department eradicating blight and supporting our law enforcement community to address the main concern of our residents.

As I am certain this announcement tomorrow will not be received well by some in our community, I felt making my position known was the appropriate thing for me to do.

You could say that what Roberts is doing is a classic case of grandstanding, and maybe even at the expense of the folks stuck with kids in crappy public schools in Jefferson. You might even be right in saying that. Roberts’ defenders would counter by echoing his point that Yenni doesn’t run the schools in Jefferson Parish – and boy, is that a good thing! – and therefore this entire task force idea is nothing but grandstanding, and so why would Roberts allow himself to be used as a prop for it?

If the Council has a significant number of members like Roberts who refuse to participate, that’s going to send a clear signal to Yenni that he’s done as an effective parish president in Jefferson. It would be hard for him to justify continuing to hold that office and he’d have to resign or else watch this take an even uglier turn.

It’s always struck us that people like Yenni and Brown who become enmeshed in such mortifying public personal scandals and yet attempt to continue holding office show that they’re the worst possible folks to be public officials. After all, these jobs don’t pay much, they’re mostly thankless and they rob their holders of any semblance of a private life. All they do offer is power over one’s fellow man, which most decent people don’t particularly regard as a great reward. So to endure the kind of pain an embarrassing scandal like Yenni and Brown are currently enduring without cashing in one’s chips and resigning sends the signal that the power over one’s fellow man really is a reward worth the agony. Who wants to be ruled by such men?

If Yenni doesn’t get the participation he’s looking for, and continues to press on against his self-created headwinds, the people in Jefferson will have to answer that question.