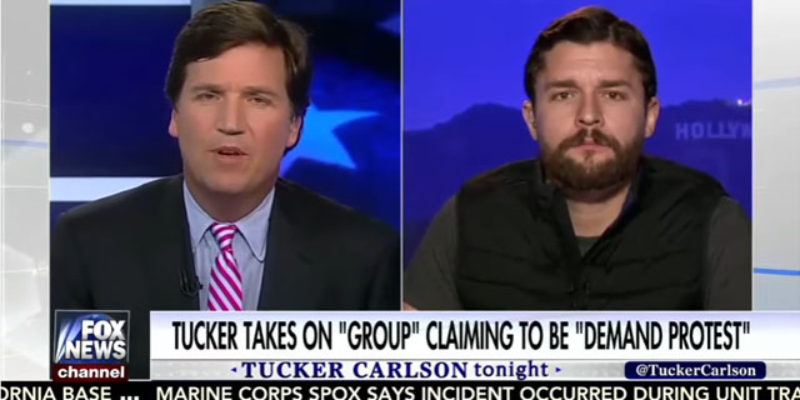 “Dom Tullipso,” who is not actually a real person but instead a fictional character played by someone else, purports to be a principal in something called “Demand Protest” – an organization billing itself as an industry leader in professional protesting. This outfit took out Craigslist ads across the country purporting to pay people $2500 per month in retainers and $50 an hour for professional protesters willing to protest the Trump inauguration.

And promptly got themselves a ridiculous amount of national publicity on Monday based on those wild claims.

So the producers of Tucker Carlson’s show found “Tullipso,” who says his name is pronounced “too-YEEP-so” because the L’s are silent, and put him on the airwaves for the host to carve up – and when it was immediately established that the whole thing is a massive hoax and a masterful job of trolling, Carlson actually fell in love with the brazen nature of the scheme and the stones of the hoaxster behind it and finished the segment congratulating him for all of the unearned media exposure he pulled off.

And in the meantime there was “Tullipso” prattling on about how his organization has changed its mind and is now in support of Donald Trump, in hopes that the president-elect will agree to release the Roswell UFO documents from 1947.

It’s one of the strangest segments ever to appear on a cable news show, and it’s worth watching just as a car wreck on the interstate induces rubbernecking. Enjoy, we guess…

Interested in more national news? We've got you covered! See More National News
Previous Article VIDEO: Watch Mary Landrieu Get Booed By Leftists As She Testifies In Favor Of The Bayou Bridge Pipeline
Next Article So Far In New Orleans, Shootings Are Up 80% And Murders Are Up 50% From This Time In 2016