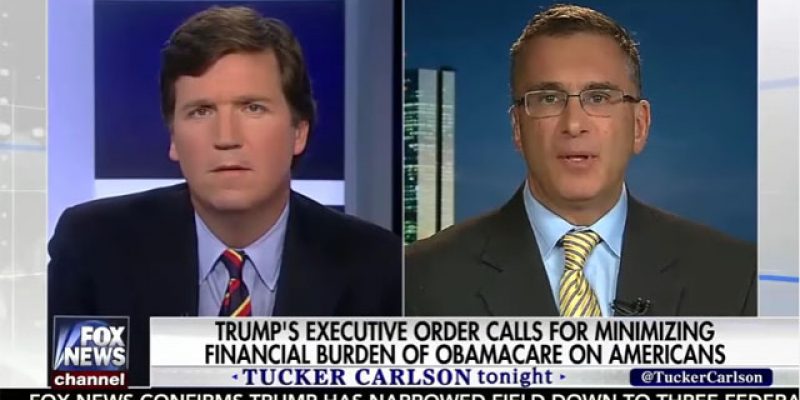 All we could come up with were references that would probably be a little more sexually evocative than we’d feel comfortable putting in a headline, so we’ll just let that hang and you can form your own ideas about what belongs in that place.

There is a reason why Carlson is destroying the ratings Megyn Kelly used to have in the same Fox News timeslot. It’s not that Kelly didn’t run a good show; she did. Lots of people hated her, but that hour went by fairly quickly even though too much of it was Food Fight TV.

Carlson doesn’t really do Food Fight TV, which is refreshing. Carlson actually has substantive conversations with people who disagree with him, and they’re usually very civil – at least so far as to allow the viewer to understand the differing positions being expressed. But where Carlson’s show really stands out is the fact that not only does he manage to bring out the positions those on the opposite side of his are offering, but also to separate the wheat from the chaff within those positions.

For example, his segment with Obamacare author Johnathan Gruber, who at this point one would imagine has to have difficulty obtaining gainful employment in any venue. Gruber was exposed as a monster a couple of years ago when video of him surfaced describing the strategy behind the Affordable Care Act as relying on the stupidity of the public, and during Carlson’s conversation with Gruber he was able to elicit a clear sense that his opinion has not changed.

Most notable was the part toward the end, where Carlson zeroed in on one of the key parts of Obamacare people cannot stand; namely, the way it forces people to pay for insurance coverage they do not need. Carlson brings up a number of required items on his own insurance policy that he will clearly never use and asks why he should have to pay for them, and Gruber’s response, after some hemming and hawing about how those items can be debated in a revamp of the law, is to categorize removing those items as a diminution of benefits. Carlson does a great service to the audience by taking issue with that, and points out that things he is required to pay for that he doesn’t want to pay for, will never use, couldn’t use if he wanted to (like birth control and maternity care) and doesn’t want, ARE NOT BENEFITS.

He wins the argument, as he nearly always does, and essentially exposes Gruber as a jumped-up fraud whose academic bluster hides the fact that he really doesn’t have any expertise in real-world health care design. It was a rotten career move for Gruber to go on Carlson’s show, just as it seems to be for all of the leftist activists and politicos Carlson has on. One worries the well will run dry of Democrat standard-bearers being fed to him and his show model will become difficult to sustain.

Interested in more national news? We've got you covered! See More National News
Previous Article Tomorrow Might Be The Beginning Of The End For Mike Yenni As Jefferson Parish President
Next Article BRIGGS: Pipelines, Trains And Automobiles