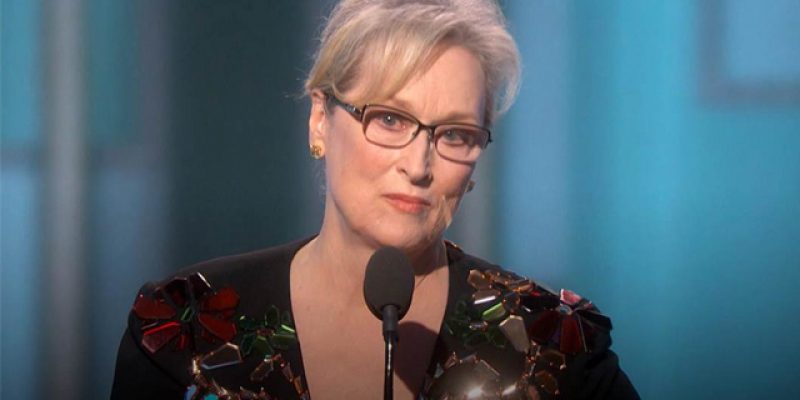 During the presidential campaign, several dozen brainless Hollywood stars were so upset at Donald Trump that they promised to leave the country if he won. Well, we are still waiting for them to do everyone a favor and exit stage left. Of course, they lied and continue to pollute the airwaves here in America.

Now that it is awards season for the movie industry, it has been non-stop criticism of our new President.  At the Golden Globes Awards, Meryl Streep blasted President Trump for his supposedly hateful gesturing about a disabled reporter during the campaign. Never mind that the Trump gestures were like other ones he has made about a variety of non-disabled individuals. In addition, he denied it was directed at the reporter in question or meant as a sign of disrespect, but facts never get in the way of the Hollywood star making an idiotic statement.

At the crazy Women’s March on January 21, hundreds of thousands of people converged on Washington D.C. to hear from washed-up stars like Madonna. During her speech, she incredibly boasted that she had “thought an awful lot about blowing up the White House.” Later, she claimed that her comments were “taken out of context,” but if a star had made such an incendiary remark about the White House during President Obama’s administration, not only would there have been universal media and Hollywood condemnation, but it is also likely the individual would have been hauled in for questioning by the Secret Service.

The Women’s March also featured fading actress Ashley Judd, who repeatedly boasted of being a “nasty woman.” She used this opportunity for attention to launch into an unhinged seven-minute diatribe about Donald Trump, associating him with the KKK, the Confederacy and Nazis. When Hollywood stars or any leftists want to insult a conservative, especially Donald Trump, they will make a Nazi or Hitler reference. These hateful insults are completely inaccurate, downright offensive and make the Hollywood stars spewing such detestable slurs look totally ridiculous.

The Hollywood hate will not be stopping anytime soon. At the Screen Actors Guild awards, numerous stars, including host Ashton Kutcher, lambasted the President for his executive order suspending our refugee program for four months and completely restricting immigration during that time from citizens living in seven terror prone countries. Kutcher said that to those stuck at airports, “we love you and we welcome you.”

Obviously, Ashton does not care about homeland security or the safety of Americans. He is surely not concerned that the seven nations mentioned in the order are overrun with terrorist activity. In contrast to his nonchalance, millions of Americans are concerned about their safety and support the President’s directive. The results of a Reuters poll taken January 31 show that 49% of Americans support the President’s executive order on immigration, while only 41% disapprove. This is especially significant because it was taken after days of non-stop media bashing of the President’s actions.

Every day, there is another celebrity taking on President Trump. This week, elderly actor Robert DeNiro boasted on the liberal love fest “The View” that he wanted to “punch” President Trump “in the face.” If any Hollywood star had made such a threat to President Obama, their career would have been over immediately.

After liberal thugs rioted on Wednesday night at the University of California, Berkeley to protest a scheduled speech by of conservative writer and Breitbart editor Milo Yiannopoulos, several Hollywood stars tweeted their support. Filmmaker Judd Apatow said that it “just the beginning,” Comedian Sarah Silverman tweeted that with the support of the “military,” “Fascists get overthrown. Mad King and his handlers go bye.” Even though there was destruction of property and the free speech rights of a conservative commentator were denied, actress Debra Messing tweeted, “Resistance Works!”

Sadly, these Hollywood stars do not support free speech or our electoral system. They will not accept the results of the 2016 presidential election or the fact that Donald Trump won an electoral vote landslide, capturing 30 states.

As President Trump stated in his inaugural address, “now arrives the hour of action.” It is time for the 62.9 million Americans who voted for Donald Trump to use their considerable economic power. If every one of those voters decided to boycott Hollywood, the industry would totally collapse. It’s not like today’s movies are very good anyway as most have an obvious agenda that is both politically correct and obnoxiously liberal.

Since Trump voters are despised by Hollywood stars, why should they spend their hard-earned money to financially enrich such dimwitted liberals, who do nothing but condemn President Trump and his change oriented agenda.

By demeaning Trump and call him a “racist,” “Nazi,” and “white supremacist,” these Hollywood fools are also mocking his millions of supporters.

It is time for the backlash of Trump supporters to begin and for millions of Americans to say to Hollywood, “enough is enough.”

Interested in more national news? We've got you covered! See More National News
Previous Article The Patriots-Roger Goodell Jokes Are Starting To Pile Up, And This Might Be The Best Of ‘Em
Next Article PRAGER U: Dave Rubin Explains Why He Left The Left