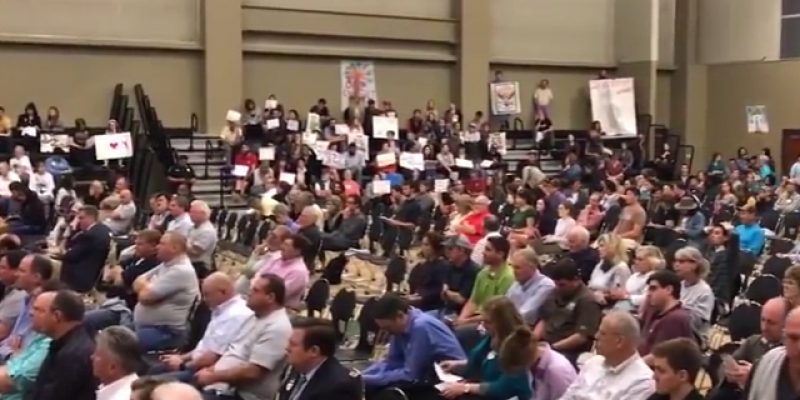 Editor’s Note: A guest post from Shawn McCoy of Inside Sources, where this article first appeared.

All you need is love. That was the message of protesters who rallied ahead of a public hearing on the Bayou Bridge pipeline last Wednesday in the small town of Napoleonville, La.

“Our love is dangerous to them,” said Cherri Foytlin of Bold Louisiana to the crowd of protesters. She then led the group across the street into the meeting hall singing “You Are My Sunshine” the whole way.

About 15 minutes later, the protesters showed their love for the speakers at the event by shouting them all down.

In particular, one had to pity a law enforcement representative repeatedly drowned out by screams of “liar” and accusations of “murder” by the protesters. He started out his speech expressing concern about the violence perpetrated by protesters against law enforcement in North Dakota, and from that point on it was all unintelligible. With signs featuring “#NoDAPL,” it was unmistakable the protesters had taken inspiration from the camps in North Dakota.

Foytlin stood up front chanting “shame, shame, shame” as he spoke, which was approximately her reaction to everyone who disagreed with her. Love is all you need.

Dr. Loren C. Scott, Professor Emeritus of Economics at Louisiana State University, addressed this issue in his speech. “If there were 85 significant spills from oil pipelines in 2016, none of us would be able to drink water, none of us would be able to do water skiing, and none of us, as it turns out, would be able to fish anywhere. Of course, none of this is true because these spills are trivial,” said Scott. Even very small leaks must be reported to regulators, and many come from pipelines built before regulations were put in place. Pipelines are now considered the safest means of transporting oil.

This particular pipeline appears set to be one of the safest in the country. A presentation by the company building the pipeline noted that Bayou Bridge would be buried deeper than required by federal regulations, 100 percent would be inspected and tested, it would have thicker walls than required, and it would feature extensive systems to monitor safety. Local politicians, both Republicans and Democrats, voiced their approval for the pipeline and its safety measures.

Bobby Callahan, the four-time past president of the Louisiana Wildlife Federation, told InsideSources he worked on pipelines for 39 years and knew how safe they were. Dozens of pipelines run across southern Louisiana. Callahan says that as a member of a conservation organization, he would love to see a broader transition to green energy, but we don’t have the technology for that yet, and stopping one pipeline is not going to have a real impact on that change.

Another supporter of the pipeline argued it brought another type of safety: national security. Retired Army Gen. James “Spider” Marks, who served as one of the military’s top intelligence officials, asked the question: “What do China, Russia, Saudi Arabia, and the United States have in common?”

Protesters, who enjoyed expressing their willful ignorance, suggested each lived under a dictatorship. Marks said, in fact, those are the leading oil producers of the world. And as the U.S. remains uncertain of its relationship with any of these other countries, it’s essential for the U.S. to achieve energy independence.

For the protesters, it wasn’t all about safety. Broad opposition to fossil fuels was part of the message. “No Oil,” chanted one protester. Others had their own views on the U.S. and national security.

Sarah Spurlock, a protester from Mississippi, told InsideSources that the goal isn’t about transporting oil safely but moving away from fossil fuels. “I’m opposed to pipelines in general. I recognize that we’re oil dependent, but I think that moving away from oil dependency is what we need to focus on more than how to get oil places in a ‘safe way’ because that’s not really real,” she explained.

For Spurlock, it seemed less about the pipeline and more about broader social change. “We need to decrease consumption, decrease dependency, and do something about the f—— military-industrial complex because that is where a huge amount of our resources are going in order to oppress people in this country, as well as countries across the globe,” she said.

The protesters generally accused everyone supporting the project of being a paid hack. One protester sat near the front of the hearing holding a dollar bill in the air all night. But some have also accused the protesters of being paid.

“They said that we were paid protesters,” complained Foytlin in her speech ahead of the rally. “I’m waiting on my check. Who do I give my address to?”

Foytlin is the State Director of Bold Louisiana, which is closely tied to a funding network established by billionaires Tom Steyer and George Soros. Foytlin clarified via email that she is paid to organize protests, but she disagrees with the idea there is “some protester sugar daddy” supporting the cause.

Ultimately, while the protesters at the event succeeded in wasting the time of the speakers who could not be heard and making life miserable for the poor stenographer responsible for transcribing the meeting, the real loss was suffered by those who left the meeting without learning much. Bobby Crochet, a farmer with several pipelines crossing his land, told InsideSources beforehand he didn’t know what to think about the pipeline and just wanted to know more. It seems unlikely he took much away from the hearing. And the same was true of other residents who were seen exiting the meeting early in frustration.