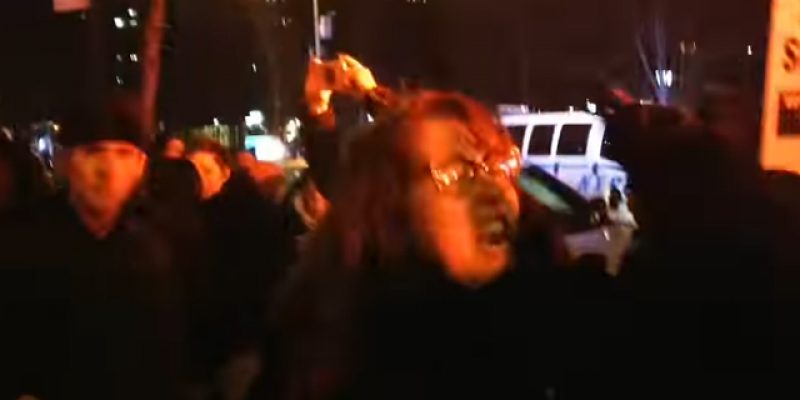 You’ve undoubtedly heard about the riot in Berkeley, where a mob of leftist radicals successfully de-platformed conservative provocateur Milo Yiannopoulos as he was scheduled to speak on the University of California campus.

But Yiannopoulos wasn’t the only right-of-center speaker whose appearance on a college campus caused a civil disturbance and an unmasking of the Left. Gavin McInnes, who for eight years was a Fox News contributor and has been associated with several other media outlets – including Vice, The Federalist, Taki and Truth Revolt, was scheduled to speak at New York University Thursday. But when the local Critical Theory mob got wind of the event, things devolved quickly.

VICE co-founder Gavin McInnes spoke for only three minutes without interruption until the jeers started. He exited the Rosenthal Pavilion in the Kimmel Center for University Life 20 minutes after he took to the podium and was escorted from a mixed room of fans and sneering students — once he was in the back, McInnes decided to leave the premises immediately.

NYPD and NYU Public Safety Officers secured both the interior and exterior of the building, and even before he entered, McInnes was attacked with pepper spray. He was treated immediately by EMT while security and university officials waited outside the Kimmel bathroom door.

And once he started speaking, students verbally harassed him — they began the ridicule once McInnes made the first joke that did not bode well with the audience.

“When I got pepper sprayed, your eyes hurt obviously,” McInnes said as he imitated a squirt gun sound — the object the protestor used to attack him. “And then you get this sense of panic like ‘How do I know this isn’t acid?’ Oh yeah, this isn’t Islam.”

The crowd started booing and saying, “Whose streets? Our streets” in a call-and-response style chant, until McInnes’s speech was no longer audible.

Senior Vice President of Student Affairs Marc Wais tried calming the crowd multiple times and asked everybody to return to their seats immediately, but after failing multiple times, McInnes made fun of Wais as well.

The crowd of protesters cheered after McInnes framed Wais as a supporter of the liberal left. After the event, Wais said that this incident was a follow-up to what happened last night at University of California, Berkeley.

“We are living in a new normal,” Wais said.

It might be that McInnes, who is certainly obnoxious but often hilarious in his determination to say things the politically-correct Left finds objectionable – like for example when he reduced Tamara Holder to a blubbering mass by suggesting she’d be happier with a husband and kids at home – didn’t help the situation much. On the other hand, if you’re a provocateur whose speaking shtick is half cultural and political commentary and half standup comedy, you’re going to respond to the kind of Triggered Outrage the radicals laid on with even more provocations. If you don’t, then they’ve won and you’ve been silenced. At least in part.

But for having been put off the stage at NYU, McInnes did win. Were it not for his ordeal we wouldn’t have the second coming of Melissa Click in the person of this cat-lady who also serves, allegedly, as a professor at that university…

(A warning: this is definitely not safe for work)

Interested in more national news? We've got you covered! See More National News
Previous Article BAYHAM: Turns Out Who-Dats Have Lots To Cheer For This Weekend
Next Article JBE Is Hiring A Former Jindal Aide As His Chief Of Staff, But You’d Be Hard-Pressed To Learn That…