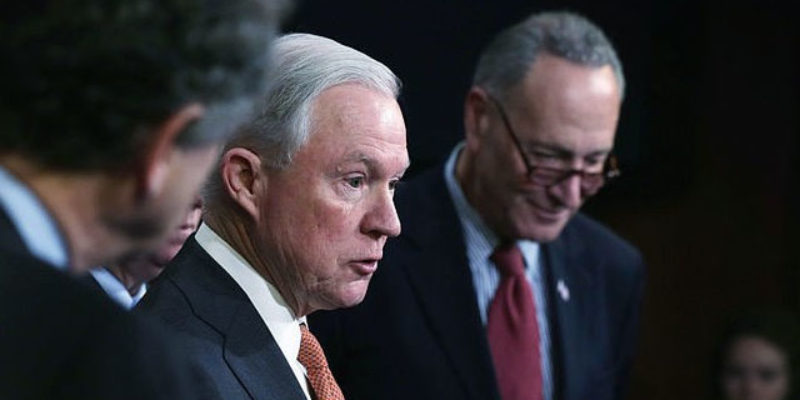 …we bring you Claire McCaskill.

Understand that when McCaskill was working to get The Russians! to allow Americans to give their orphans good homes, that was worthwhile public service. Trying to sell the corrupt and disastrous Iran Deal was not, but it was still activity related to why the American taxpayer foots the bill for her salary.

And now she’s denying ever doing her job with respect to The Russians! Why? In service to an idiotic, ridiculous partisan myth the Democrats simply cannot leave alone.

The latest, in case you haven’t heard, is that Jeff Sessions has to resign because when he was being interrogated as part of his confirmation process as Attorney General, he denied ever meeting with The Russians! about the 2016 election.

Which, according to the evidence thus far presented, is true.

But it turns out that Sessions, who when he was a Senator on the Armed Services Committee, had a meeting with the Russian ambassador, and also met him at a Heritage Foundation function last year.

And because he had interaction with the ambassador, this means he lied in his confirmation hearings and must now resign. Even if there is no proof his interactions had anything to do with the election.

And to maintain this stupid narrative, Claire McCaskill has to concoct her own provable lie in order to make Sessions look bad.

At some point, this becomes more than Chuck Schumer and Nancy Pelosi can ask of their members. McCaskill, after all, is in front of the voters in Missouri for re-election next year, and she’s in a pitifully weak electoral position considering that the Show-Me State has turned about as red as it’s ever been and went heavily for Donald Trump last year. McCaskill survived only by a relatively small margin against the utter nincompoop Todd Akin in 2012; had Akin simply kept his mouth shut for the general election cycle and not attempted to peddle nonsense about the biological inability of women to conceive children following rape, he would have replaced her. It’s difficult to believe the GOP in that state won’t come up with at least a marginally better nominee next year, and yet McCaskill is being led into disaster with unhinged stupidities like I’ve Never Talked To The Russians!, And Jeff Sessions Must Have Been Doing Something Untoward.

Why, when this was demanded of her, McCaskill didn’t just refuse is beyond us. Is she concerned about fundraising? Campaign checks won’t do her any good if the public completely rejects her.

And what will be gained by this? Sessions has said he’d recuse himself from an investigation of Russian attempts to influence the election last year, but that isn’t a particularly serious investigation anyway; the Russians have been trying to influence American elections since 1917 and it’s only been since they stopped trying to help the Democrats that somehow this is a problem.

Here’s an idea – if he recuses himself from that investigation, perhaps Sessions now has time to pursue an indictment of the Clinton Foundation for its pay-for-play corruption. That has a Russian connection, by the way, since it was the Russians who got access to 20 percent of our uranium supply thanks to the Clinton Foundation.

If these stupid games are how the Democrats want to operate over the next four years, then by all means they deserve stupid prizes like having the criminals they’ve propped up all this time go on trial. It’s not like the American public won’t be well served by a few people who think they’re above the law finding out something different.

UPDATE: And now Schumer, who is Anthony Weiner without the protruding sex organ, is demanding Sessions’ resignation…

To say this has gone off the deep end is too kind. The Democrat Party has ceased existing as even arguably a viable entity in American governance.

Interested in more national news? We've got you covered! See More National News
Previous Article VIDEO: The Wife’s Reaction To Coming Home To A House Full Of Puppies Is Priceless
Next Article EXCLUSIVE: Robbie Gatti Leases His Property To This Very Suspicious Business