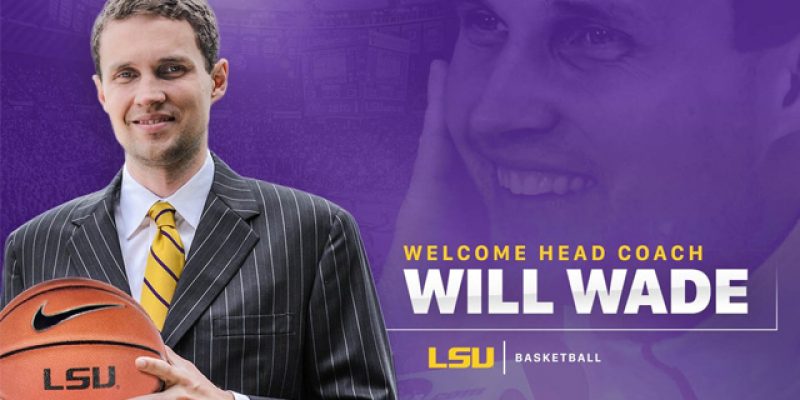 And yes, this comes from somebody who has made a practice of trashing Alleva on a regular basis for moves he’s made. This time, he deserves his due – the Wade hire is the best thing he’s done.

We’re saying that without knowing how it will turn out. Wade could fail at LSU. It’s still a great hire because Wade, resume-wise, is the best hire LSU has ever made for basketball.

That’s going to sound like a bold statement. It’s anything but. For all the success LSU has intermittently had in basketball, over the last 50 years the coaches they’ve hired have been anything but superstars.

Frank Truitt, who coached LSU for only one year (he went 6-20 in 1965-66), had been a successful assistant at Ohio State. But Truitt was hired under circumstances which indicate the program was a total debacle. A famous quote from Truitt about that disastrous year: “When I went there they said that we could have a new arena in two years, that I could carry over my 17 years retirement from Ohio, and that I would be tenured on the faculty, like I was at Ohio State. None of that happened. The fourth reason was I just assumed I could recruit blacks and didn’t think to ask before I took the job.” And when Truitt showed the athletic director a list of his prospective recruits, which included a number of black players, he was told “You can’t recruit these guys. We aren’t ready for this.” Truitt left for Kent State after that one year and had two winning seasons in his next eight before becoming that school’s golf coach. He may not have been a terrible hire as an assistant at a prominent program, but if at the time your policy was not to recruit black athletes how on earth do you hire a coach from Ohio who expects to do so? A well-researched hire that wasn’t.

Press Maravich had failed as the head coach at Marshall and, while he’d had success at North Carolina State before LSU hired him, he’d been an assistant who became an interim head coach and was never considered long for that job. And after Maravich went to LSU, NC State won a national title within a couple of years. Maravich was considered a worthwhile hire because his son was Pete Maravich, not because anybody thought he was a good coach. And Maravich, despite having his son for three years at LSU, went to only one postseason tournament before he was sent packing.

Dale Brown, far and away the most successful basketball coach LSU has ever hired, may have come from the most lowly origins. When he was hired, Brown had been an assistant at Washington State for one year, following five years as an assistant at Utah State. A high-profile, in-demand hire he was not. Brown basically talked his way into the LSU job, though once he got it he built the LSU program into something it hadn’t been before and really hasn’t been since, including 13 straight NCAA appearances and a pair of Final Fours over the course of his 25 years on the job.

John Brady was hired after Brown, in the wake of the Lester Earl recruiting scandal and Brown’s subsequent resignation. Brady had been an assistant to Richard Williams at Mississippi State, most notably, and had put together an 89-77 record in six seasons at Samford – the best season of which was a 19-9 mark in 1996-97 that included no postseason tournament invitation. Brady actually had some success at LSU, including an unlikely 2006 Final Four appearance before crashing the program two years later.

Trent Johnson might have had the best resume at the time of his hiring at LSU of all the coaches in the past half-century, but Johnson’s hire was a failure of due diligence. He was coming off a 27-win, Sweet Sixteen season at Stanford…and yet the athletic director there had not seen fit to offer him a contract extension. That was a red flag, and the reason it probably should have dissuaded LSU from making the hire was that the Stanford season which got him the LSU job came from having the 7-foot Lopez twins, who were leaving for the NBA – and their mother worked in the admissions office at Stanford. Four-leaf clovers like that don’t come along often in recruiting; outside the Lopezes, Johnson recruited exceedingly meager talent, and the program crashed there after he left. At LSU, Johnson recruited almost no talent at all, and after a strong first season with a good team left over from Brady LSU’s program crashed, too.

And then there was Johnny Jones, who had done nothing prior to being hired at LSU to qualify him for the job. He’d been the assistant involved in the Lester Earl scandal, which at most programs would preclude ever getting the job again. He’d been the head coach at North Texas for 11 years – nobody in demand stays at a program like North Texas for 11 years – and had a career 91-88 conference record there. Jones was a political hire that couldn’t be justified on the basis of his record.

On the other hand, Wade is a coach coming off four years of first or second place conference finishes at two different schools – he was 2nd in the Southern Conference twice after taking over a program that had been 13-19 the year before he got the job, with 12-4 and 15-3 conference records (18-15 and 22-10 overall), and then at VCU he went 25-11 (14-4 and tied for first in the Atlantic 10) and 26-9 (14-4) the past two years. He’s 55-15 in conference play as a head coach, with three postseason tournaments (two of them in the NCAA Tournament) in four years as a head coach. And unlike Johnson, Wade is a legitimately hot name in the coaching profession – he was approached last year about the Vanderbilt job last year, and about the NC State and Clemson jobs this year, and he was even mentioned as a potential candidate for the Indiana job this year.

This makes Wade out to be a cut above what LSU has hired in the past. Sure, he’s young. But to have accomplished what he’s accomplished at only 34 years old, and to do it without being under the wing of a legendary coach like Mike Kzyrzewski or Roy Williams or Rick Pitino, is nothing short of amazing. Wade didn’t even play college basketball, or for that matter high school basketball – he was a student manager under Larry Shyatt and Oliver Purnell while in college at Clemson, and impressed Purnell enough to be hired as a graduate assistant and then the director of basketball operations. Wade was then hired as an assistant to Tommy Amaker when the latter got the head coaching job at Harvard, and he promptly went out and recruited a Top 25 class for Amaker which included eventual NBA point guard Jeremy Lin.

Then, a former Clemson assistant Wade had worked with named Shaka Smart hired him at VCU, where Wade was on a staff that earned four consecutive postseason appearances, including a trip to the Final Four in 2011. Only five teams won at least 27 games each season between 2009-13; VCU was one. That’s what got Wade the Chattanooga job, and it’s why VCU was eager to bring him back when Smart took the Texas job.

Now – VCU coaches have had a perplexing lack of success at bigger programs. Jeff Capel wasn’t an altogether disaster at Oklahoma; he did have 23-12 and 30-6 records in his second and third seasons before the program got out of control on him and he was fired after five years. Anthony Grant certainly wasn’t successful at Alabama, as he was fired after an 117-85 record over six years (including one NCAA appearance and three NIT berths). And Smart has been at Texas for two years; he was 20-13 and went to the NCAA tournament last year and then fell to 11-22 this year. But in Wade’s defense he’s the only one of those VCU coaches who was also a head coach elsewhere, and he built the program at Tennessee-Chattanooga. The year after he left Chattanooga the team he left behind went 29-5 and made the NCAA dance. That means he’s not just a VCU coach.

Wade is a cut above anyone LSU has had in the job of head men’s basketball coach. If he’s not successful at LSU, we can’t criticize Alleva for the hire – he brings all the elements to the table which should make him successful. And what we’ve heard of the negotiations today which resulted in the hire make us remember Nick Saban’s hiring back in December of 1999. Saban presented then-chancellor Mark Emmert and athletic director Joe Dean with a list of investments he wanted LSU to make in the football program, including an operations center on the site of the practice fields and a first-class weight room and meeting facilities (at the time, the project was known as “Sabanland”), plus an Academic Center for Athletes that virtually nobody in college football even had. By the time those things were built, visiting recruits to LSU were blown away by the trappings of success on campus, and soon Saban paid those off with a national championship.

We’re told Wade presented Alleva with a similar list, like for example a weight room for the basketball team’s use, coaches’ offices inside the Pete Maravich Assembly Center, use of the school jet for recruiting trips to cut down on wasted time making commercial flight connections and other conditions – all of which amounted to making an investment in the success of the program. That sounds a lot like a Saban in terms of a vision for elevating the program to a level it hasn’t been in the past.

We’ve howled for years that LSU needed to choose to win in men’s basketball by hiring a talented, accomplished, energetic coach who could do for it what Saban did in football. There were a number of coaches at mid-major programs this year (there almost always are, to be honest) who could fit that bill. In Wade, LSU hired potentially the best of the lot. Alleva, and assistant AD in charge of basketball Eddie Nunez, deserve congratulations and thanks from the fans for bringing him aboard.