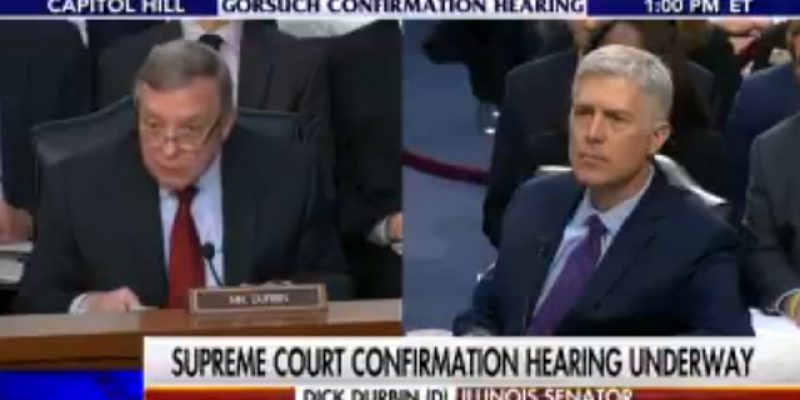 This went really badly for Durbin, as did more or less his entire exchange with the Supreme Court nominee who put on several highlights amid his confirmation hearing today. At issue was an entirely cooked-up controversy involving a former law student in one of Gorsuch’s classes at the University of Colorado law school; Jennifer Sisk, who is a former staffer for Democrat senator Mark Udall, alleged that Gorsuch had accused women in the workplace of abusing maternity benefits.

FAKE NEWS: So New York Magazine reports that a former students say that Judge Neil Gorsuch told them that women manipulate maternity benefits. Well, that’s hardly a shocking statement — people manipulate benefits of all kinds, and the argument that maternity benefits are somehow the only form of benefit not subject to that behavior is absurd.

But the quoted “former student,” identified by New York Magazine as one “Jennifer Sisk, who graduated from the University of Colorado Law School last year,” is not just any former student, but a former operative for Democrat Mark Udall. (“Sisk went to college in Massachusetts, at Wellesley, then worked as an aide in Mark Udall’s Senate office in Washington.”) New York Magazine leaves that rather important fact out.

And also, via Instapundit, NBC News had shot even more holes through it…

Another former student wrote to the committee to refute Sisk’s claims.

“Although Judge Gorsuch did discuss some of the topics mentioned in the letter, he did not do so in the manner described,” Will Hauptman wrote in the letter, which was sent on Sunday.

Hauptman wrote that Gorsuch often asked his students to consider the challenges they would face as new attorneys, including the tension between building a career and starting a family, especially for women.

“The seriousness with which the judge asked us to consider these realities reflected his desire to make us aware of them, not any animus against a career or group,” he wrote.

A response from the person aiding in the Gorsuch nomination process also said that Sisk’s claims were false and came from a misunderstanding of the hypothetical discussion question.

And yet Durbin thought he’d bring it up and smear Gorsuch with it by dressing up the allegation in references to legal cases the judge was loath to comment on for fear of prejudicing future cases he would see either in his current role or on the Supreme Court. When the Illinois Democrat finally got around to asking the question about this garbage, Gorsuch let loose with an erudite, serious, heartfelt response which left Durbin as a smoking pile of ash, blubbering about how he’d said he’d give Gorsuch a chance to address it.

Our readers know as well as we do that was never Durbin’s intention. He got precisely what he deserved. And the Democrats who thought they would challenge this supremely qualified jurist and thus fish around for a justification for a partisan “no” vote on him, or worse, a filibuster, ended the day covered in cuts and bruises from the logical and rhetorical beatdowns he issued in exchanges just like this one.

Interested in more national news? We've got you covered! See More National News
Previous Article LSU Fans Ought To Be Grateful To Joe Alleva For Hiring Will Wade, Who Has The Best Resume Of Any Coach LSU Has Ever Hired
Next Article Gavin McInnes Takes On The “Fearless Girl” Statue On Wall Street, And It’s Hilarious