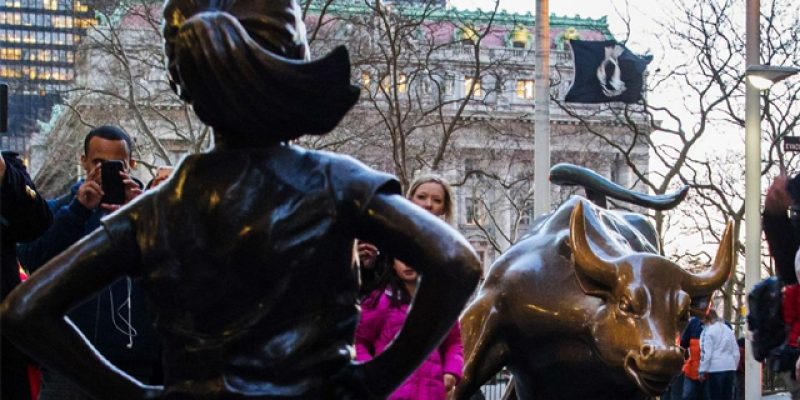 Like most of what McInnes does this isn’t exactly safe for work – but probably mostly because the loud reaction you’ll have to it.

If it’s anything like the one we had, that is.

State Street Financial Advisors commissioned a statue of a brave little girl to place in front of the famous Wall Street Bull in Lower Manhattan, in an effort to symbolize the courage of women on Wall Street or something, and the reaction to it has been fairly predictable – the “smart set” has fallen all over itself in praise of the symbolism, while pretty much everybody else has had the same reaction McInnes had; namely, that if we’re going to take a common-sense approach to analyzing that symbol it comes off more as cruelty to women personified by that little girl, who in real life wouldn’t be standing up to that raging bull and in real life would be in mortal danger from him.

McInnes also notes that this is a key characteristic of post-modern feminism; namely, an insistence on disregarding women’s physical limitations as merely social constructs, and then rage at the rest of the world when that insistence crashes into reality. When you declare that women are just as capable as men to be Marines or Navy SEALS, for example, and then find out that few or no women can meet the grueling training requirements for those jobs, you cannot then demand the standards be lowered to accept women while preserving your credibility. At that point you have to admit you were wrong, and move on. Which feminists won’t do, for some reason; instead, what we get is Angelina Jolie and Scarlett Johanssen beating the crap out of 250-pound men in every other movie at the theater.

He’s right. In real life it would be monstrous cruelty to put a little girl in front of a raging bull, and in real life the bull would gore the little girl and kill her in seconds. That this statue is supposed to symbolize women on Wall Street doesn’t do women on Wall Street any favors at all, which is something obvious to everyone but the incredibly dense group-thinkers on the Left.