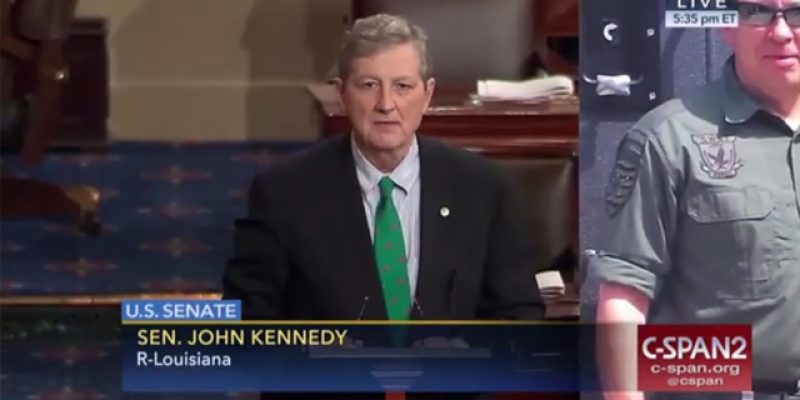 Yesterday at the U.S. Capitol, both of Louisiana’s Senators paid tribute to East Baton Rouge Sheriff’s Deputy Sgt. Shawn Anderson, who was murdered over the weekend while attempting to arrest an accused rapist in Baton Rouge. Sens. Bill Cassidy and John Kennedy gave speeches in Anderson’s honor, and noted the alarmingly high butcher’s bill accumulating in Louisiana among our law enforcement officers – Anderson’s was the 11th violent death visited upon policemen in this state in a little under a year.

That’s a shocking number for a state as small as Louisiana is, and it makes a cruel joke out of the complaints of the Black Lives Matter crowd. That number shows our law officers put their lives on the line for us every day, and there are dangerous criminals among us for whom killing even policemen is not beyond the pale. Law enforcement officers deserve respect and cooperation for a brutally difficult job – not derision and suspicion and criticism for the niceties or lack thereof as to how they handle it in impossible circumstances.

This is important not just in the wake of Sgt. Anderson’s death. It’s important because, if the rumor mill is correct, within the next few days it’s expected that the Justice Department will release the findings from its investigation into the Alton Sterling shooting and DOJ will in all likelihood conclude that no criminal acts were committed in that shooting. Taken in concert with the 11 policemen murdered in the past year in the state, a little perspective should indicate that an armed suspect who refuses to drop his weapon or follow police commands, and who struggles with cops as they attempt to arrest him, might be shot in the course of that struggle. And yet for months there has been the fear, or even the expectation, that when the findings come out there will be rioting, or worse.

Which is an unacceptable state of affairs.

Here was Kennedy’s speech honoring Anderson, and noting the other law enforcement officers murdered in the line of duty in Louisiana.

Cassidy’s video hasn’t made it to YouTube, but it can be found at this link.