We’re going to say no, but a good deal of groveling, and a nice hot cup of shut the f*** up, should be in store for the Congressman from Louisiana’s 2nd District for the time being.

Not to mention there is his chairmanship of the Congressional Black Caucus.

IJ Review’s Benny Johnson was in attendance at the Presa Foundation’s annual dinner in Washington, at which Richmond was speaking, and caught Richmond’s ugly statement…

Terrible @CedricRichmond line at Presa FoundationDinner about @KellyannePolls on couch photo: “She looks very familiar in that position.”

This is an exact quote from congressman @CedricRichmond: “Y’all seen that photo of Kellyanne on couch? She looks familiar in that position.” pic.twitter.com/drMybx6ruk

For Richmond to make such a statement knowing that after this stupid Kellyanne-on-the-couch fake controversy blew up, a photo surfaced showing the reason Conway was positioned as she was… 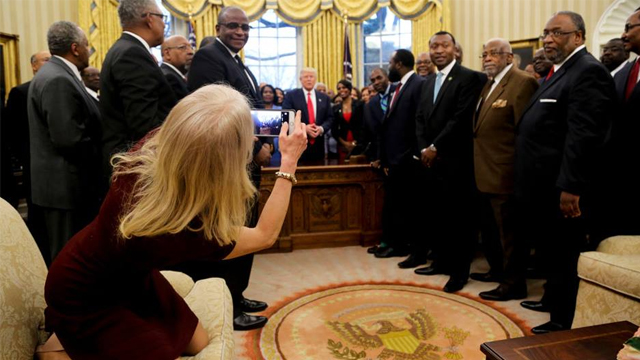 …makes it twice as egregious and disrespectful. It’s already known this was a largely bogus issue – before the second picture surfaced, Conway was criticized for being “too comfortable” and “overly familiar” with the heads of a number of the nation’s historically black colleges. That largely went away when it was established she was memorializing their appearance in the Oval Office with photography.

Until Richmond came along and essentially called her a whore.

It wouldn’t have been tolerated for Louis Gohmert or Mick Mulvaney to have said such things about Valerie Jarrett, so it might have to be explained to us why Cedric Richmond is allowed to treat Conway this way. It’s uncalled for, it’s low-class and it proves Richmond hasn’t progressed very far from his days as an embarrassment to the Louisiana legislature.

He ought to be censured by the House. And he ought to shut his mouth for a while. He’s disgraced the state of Louisiana, and he’s lucky we no longer live in an era where such statements don’t engender pistols at dawn.

“Yesterday, Congressman Cedric Richmond made a deeply offensive remark regarding Kellyanne Conway, and he owes her a sincere and prompt apology. Using inappropriate sexual innuendos to demean women is sexism at its worse. Given that March is Women’s History Month, Congressman Richmond’s remarks about the first woman to successfully manage a US presidential campaign are especially disgusting. We’d hope that Governor John Bel Edwards and LA Democrat Chairwoman Karen Carter Peterson will join us in demanding Congressman Richmond apologize immediately.”

Interested in more national news? We've got you covered! See More National News
Previous Article What Does JBE Think Of One Of His Major Supporters Dressing Up In Blackface?
Next Article VIDEO: The Wife’s Reaction To Coming Home To A House Full Of Puppies Is Priceless