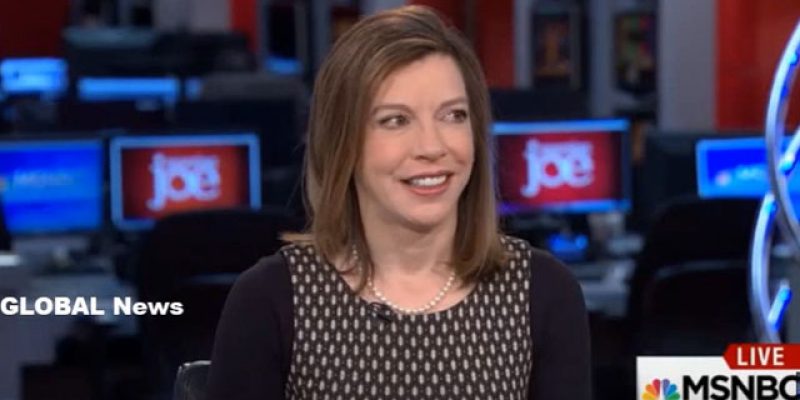 You have to put some things together to mark this as a smoking gun proving the Obama administration was spying on Donald Trump’s campaign and transition team, but it isn’t a stretch.

Evelyn Farkas, who was an Obama official (she was deputy assistant secretary of defense under Obama), went on Morning Joe back at the beginning of March before Donald Trump blasted out a tweet accusing his predecessor of wiretapping the phones in Trump Tower. We know that Trump’s verbiage was imprecise, but the clip below makes it pretty clear that the meat of Trump’s allegation, that the Obama administration was surveilling his campaign under the theory that they were engaged in treasonous collusion with the Russians, is true.

She comes right out and says it, and she’s proud of it.

“I was urging my former colleagues and, frankly speaking, the people on the Hill, it was more actually aimed at telling the Hill people, get as much information as you can, get as much intelligence as you can, before President Obama leaves the administration,” Farkas, who is now a senior fellow at the Atlantic Council, said.

“Because I had a fear that somehow that information would disappear with the senior [Obama] people who left, so it would be hidden away in the bureaucracy … that the Trump folks – if they found out how we knew what we knew about their … the Trump staff dealing with Russians – that they would try to compromise those sources and methods, meaning we no longer have access to that intelligence.”

There has been zero evidence produced to date proving any collusion between Trump’s campaign and the Russians. On anything. This despite nearly a year of investigation into the matter. Meanwhile, there was lots of evidence of cooperation between Hillary Clinton’s team and the Russians – for example, there’s John Podesta’s ownership of 75,000 shares and a spot on the board of a company controlled by the Kremlin, which he never disclosed despite the fact he had a job as a senior advisor to Obama and was more or less running Clinton’s presidential campaign.

As Trey Gowdy noted on Tucker Carlson’s show last night, the idea that American citizens could be incidentally picked up in communications intercepted with foreign sources is not particularly earth-shattering – that happens all the time and there’s a procedure for handling it. Their identities are “masked” by the intelligence agencies intercepting the communications in order to protect their rights as the communications are shared among the responsible government agencies.

The issue here, and what makes the whole “wiretapping” controversy such a chilling episode, is that the Trump team figures in question – most notably former National Security Advisor Mike Flynn – were “unmasked,” which is a felony violation of federal law, and the information in question was spread throughout the government so that it could be leaked to the media in damaging fashion without the identity of the leaker being easily discernible. This is the crux of the accusation against Barack Obama and his former team, and it’s why these practices have been likened to a coup attempt against Trump.

What else is troubling here is that if the Obama spies were listening in on Trump, how do we know the subject matter at hand was limited to discussions with foreign powers? How do we know Flynn’s contacts with other members of the Trump team weren’t eavesdropped upon?

Until Trump’s tweet making these accusation that the entire Democrat Party has denounced as absurd, Obama’s people were actively bragging about them. Farkas is bragging about them in this clip. The Farkas interview is four weeks old and it wasn’t even considered to be all that newsworthy until someone dug it back up this week. Now it’s an article of faith on the Left that everything Trump has said on the subject is a lie, and oh-by-the-way Trump is tied in with the Russians.

To which the question should be asked: if Obama wasn’t spying on Trump to gain this information, then how do you know Trump’s in bed with the Russians?

Interested in more national news? We've got you covered! See More National News
Previous Article Someone Should Ask JBE Why This Story Isn’t Being Written About Louisiana
Next Article A Quick 2019 Gubernatorial Election Tidbit To Pass Along…