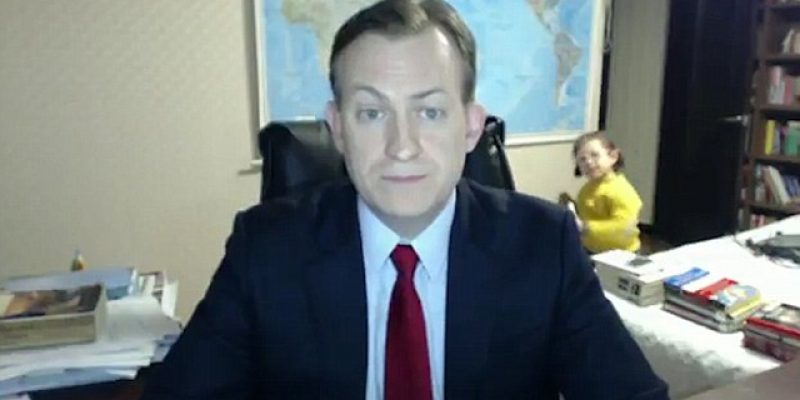 Robert Kelly is a professor of political science at Pusan National University in South Korea, and with recent events in that country – the ouster of Park Geun-hye as the South Korean president, specifically – he’s the kind of subject matter expert that TV news organizations wish to call on. So the BBC did yesterday, hoping to get a smart segment on the politics of the Korean peninsula.

But Kelly, who has a Skype studio set up in his home office, suffered what work-from-homers fear most – the pouring-in of one’s domestic life…

This BBC interview is amazing. Just wait until the mum rushes in… pic.twitter.com/LGw1ACR9rg

As a writer and pundit working out of my house, I can certainly sympathize. I’ll do radio all the time, and with a rather rambunctious boxer living here with me I’m always nervous about the various background noises Bingle can inflict on my work. Thankfully, now that he’s two years old he’s developed a sense of decorum, but when he was a puppy he had a penchant for breaking into song.

Literally. He’d get hold of a squeaky toy, find inspiration and there would be melodious howling which could be clearly heard in another room. And I’d be on the air by phone with a radio station in Shreveport, or Salt Lake City, or somewhere, and almost have my brilliant takes drowned out by a singing dog – and I’d have to explain that my office sometimes doubled as an opera.

So our sympathies and best wishes to Professor Kelly – as well as a reminder to lock that office door when he’s going to go on with the BBC.

Interested in more national news? We've got you covered! See More National News
Previous Article Abraham Is A Co-Sponsor Of Rep. Thomas Massie’s Bill To Dump The Department Of Education
Next Article BREAKING: They Did Fire Johnny Jones Today