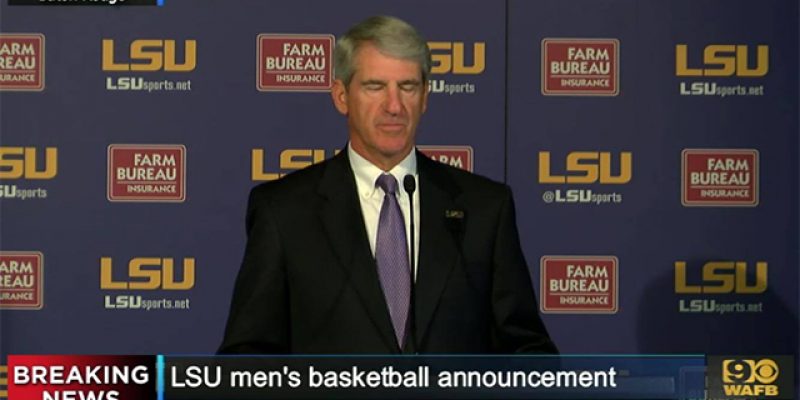 Somewhat surprisingly, it was done via a press conference rather than a press release. Athletic Director Joe Alleva conducted the conference, which begins at 11:03:24 or so of this video…

1. Alleva said that what he’s learned from the two failed basketball hires he’s made that “the word ‘fit’ is a joke.” Thank God for that – Jones was sold to him as a perfect fit for the LSU job and he bought that line, which was a mistake. Just knowing people in town doesn’t mean anything when it comes to whether a coach will win in the long haul. And people who say Trent Johnson wasn’t a “fit” at LSU neglect to mention that he was fired at TCU last year – and TCU is a pretty similar school to Stanford, where Johnson did well enough to attract Alleva’s attention. The problem with Johnson wasn’t that he wasn’t a “fit” at LSU, it’s that he was a terrible recruiter. The athletic director at Stanford didn’t offer Johnson a raise or contract extension despite a 27-win season and an NCAA Sweet Sixteen berth, because he knew that when the Lopez twins moved on to the NBA that program was going to be bereft of talent and it would start losing with or without Johnson.

One would hope that Alleva’s new attitude toward the concept of “fit” where a coaching hire is concerned makes for a stronger hiring process. LSU is the kind of place where a really good coach has all of the resources he’ll need to win, bigly. If Alleva and the search firm he says he’s in consultation with focus on hiring someone with above-average to elite skills in floor coaching, player development, recruiting and program management, they should be able to find someone who can “fit” the program no matter where he comes from.

2. All three of the assistant coaches are also gone. Associate AD Eddie Nunez, who’s been the overseer of sorts for men’s basketball, is now at the helm of the program until a new coach is found.

3. Alleva was asked whether Jones’ decision to forego playing in the NIT after getting blown out 71-38 by Texas A&M in the SEC Tournament set his firing in motion, and he didn’t take the bait on that. He said that was Jones’ decision and he didn’t quibble with it. He did say that last year’s team didn’t meet expectations, and “when you lose 19 of 21 it’s pretty obvious.”

4. Asked what made him think a good coach would be interested in the job, Alleva said “Because this is LSU.” It would have been nice if he could have expanded on that. The question was actually a high fastball in the wheelhouse for a good AD to knock right out of the park by saying something like this…

“We have a $140 million athletic program. We’re the only Power 5 conference school in one of the most fertile athletic hotbeds in the country – if I’m not mistaken there was a study done which said that in basketball, just like football, Louisiana’s either Number One or close to it in the number of professional athletes produced per capita. At LSU you start with a recruiting base most schools would kill for.

“Our fans have shown in sport after sport that if you give them a quality product to support, they’ll support it like nobody else. That’s true in football, it’s true in baseball, and at one time it was true in basketball.

“I think within the coaching profession all this stuff is known. They know we have the financial resources to do just about anything we need to win, our facilities, and in particular that new practice facility we built not long ago, can stack up with many of the top programs. They know we have a huge following. All the elements are here. What we need is a great coach and to give him time to build a program, and it’s also known that at LSU we’re not quick to fire people. Turnover here is relatively low.

“So without question, this program is a sleeping giant. It’s an uncut diamond. I expect we’ll have our pick of terrific candidates and I’m confident we’re going to be exceptionally pleased with our next coach.”

Lost opportunity for Alleva to say those things. You always want to sell your program, and he didn’t.

5. Alleva didn’t resurrect the old Joe Dean chestnut of “Money is no object,” but people close to the program had told Hayride sources last night that they’re prepared to spend a large amount to get a coach. Alleva said today that depends on who they hire – if it’s somebody whose market value dictates a large check, they’ll do that, but if they decide on a mid-major coach who doesn’t command a monster salary they won’t overpay. That’s a fine statement, but fans are entitled to be a bit skeptical given the football search in November, in which Alleva said he wouldn’t get in a “bidding war” for Tom Herman before hiring interim coach Ed Orgeron.

6. Alleva was asked about the decision not to fire Jones during the season, and he dismissed it as not something he was interested in. Nobody followed up on the question, and so it was left hanging that Les Miles was fired four games into the 2016 football season, so why was Jones’ situation any different. There are some reasonable responses to such a question, mostly that the 2016 football team was good enough that perhaps a new direction would salvage the season – and arguably, it did – while this basketball team was going absolutely nowhere no matter who was coaching. Perhaps Alleva didn’t want to say that, but on the other hand someone will say or write that the reason Jones wasn’t let go amid a school-record 15-game losing streak was that he was an Alleva hire and Miles was not.

Alleva said the search will begin immediately, though it’s unlikely to produce results for some time since virtually all of the candidates will have teams playing in postseason for at least the next week and change. We’ll have an update on our candidates list on Monday.