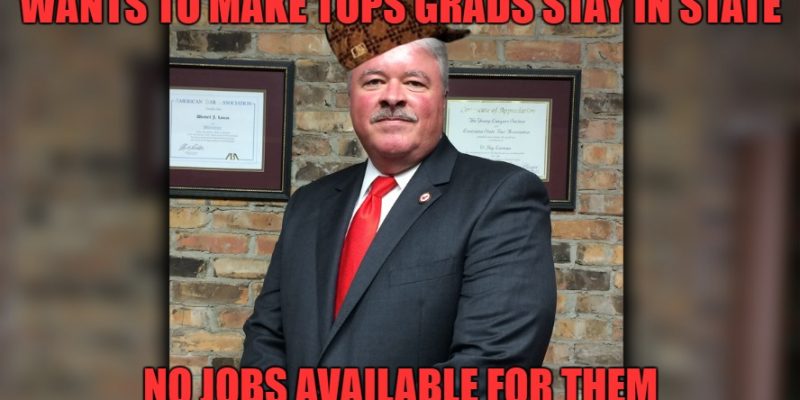 It’s almost time for the Louisiana Legislature to go back into session. That means we have an opportunity to shine the light on some of the dumbest ideas in Louisiana.

One of those dumb ideas is being proposed by State Sen. Jay Luneau (D-Alexandria) is going to file a bill to require all TOPS graduates to work and pay taxes in Louisiana for 4 years after college.

Sen. Jay Luneau, D-Alexandria, says he is filing legislation for the regular session that will require TOPS graduates to work and pay taxes in Louisiana. His plan would force grads to work for a span of time that equals the duration of their TOPS award. “If they’re on TOPS for four years, then they will need to work and file tax returns for four years here,” Luneau says. “It’s an incentive to keep our kids in Louisiana.” While the details are still being worked out, the senator says a potential penalty for noncompliance could be repayment of 50% of to the total TOPS award, under an installment plan.

The reason why TOPS graduates don’t stay in Louisiana is because there aren’t any jobs for them. That’s because Democrats like Luneau have spent their political careers being more concerned about the needs of state government instead of diversifying Louisiana’s economy.

Louisiana is one of the worst states in the country to do business and that has forced our young people to leave the state. Far from incentivizing Louisiana’s young people from staying in the state after graduating college, it incentivizes them to leave the state for college. You would then have universities who would be starving for money and unable to compete on the national level for students.

Unfortunately, we can expect to see more attacks on TOPS from Democrats in the legislature. The majority of TOPS recipients come from families who tend to vote Republican. It’s a way to inflict pain on their political opponents.

In a sane state, Luneau’s bill wouldn’t have the time of day. But this is Louisiana so this bill may have a chance.

Interested in more news from Louisiana? We've got you covered! See More Louisiana News
Previous Article BREAKING: They Did Fire Johnny Jones Today
Next Article Kenneth Polite And The Soon-To-Be-Vacant US Attorney Job In New Orleans