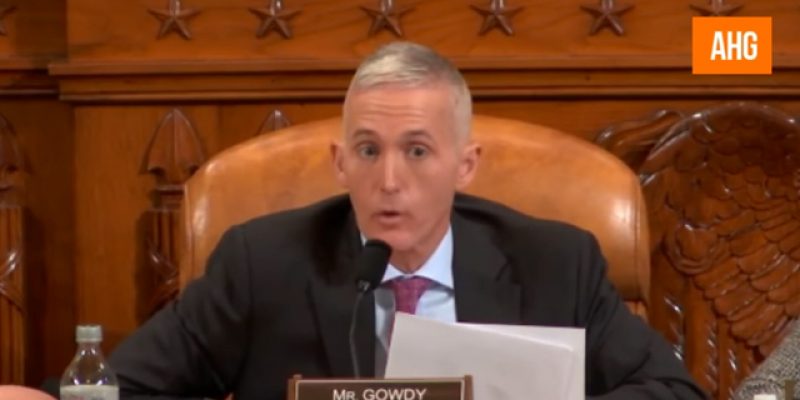 This is 15 minutes of Mr. Smith Goes To Washington-quality stuff, as Rep. Trey Gowdy (R-SC) grills FBI director James Comey during today’s hearing about the investigation of links between the Trump campaign and Russian intelligence last year.

Comey took to Capitol Hill to testify at a House Intelligence Committee hearing on that subject, but Gowdy decided to lead him in a different direction during his time of questioning. Gowdy wanted to know about the leaks of material apparently generated through FISA warrants to media outlets like the New York Times and Washington Post and whether those leaks would be prosecuted.

Because, as Gowdy said, for all the discussion about whatever influence or connections the Russians may have had in meddling with the U.S. election, something for which concrete evidence is relatively scant despite lots of effort to uncover it, it has yet to be established that any crimes were committed. Not by anyone in the Trump campaign, nor by anyone on the Russian side. That isn’t to say there may not have been crimes committed, and it isn’t to say there weren’t acts committed which, though perhaps not criminal, would be considered morally wrong. But so far we have no evidence of any such activity.

But like Gowdy says in the clip what we do know is that media outlets including the Post and the Times printed the name of a U.S. citizen, namely Trump’s initial national security advisor Mike Flynn, who was captured on surveilled communications arising out of a FISA warrant – and for someone to have leaked Flynn’s name in connection with those communications and, further, to have leaked the substance of them, is a felony under federal law. And therefore, Gowdy says, the leaks are every bit as important as a subject for the FBI’s investigative powers as the Russian meddling is.

Comey, perhaps out of an abundance of investigatory caution but we’re struggling to concoct an adequate justification for it, refuses to confirm to Gowdy that his agency is actually investigating the leaks. He says so because he doesn’t want to confirm that Flynn being outed was a breach of confidentiality or that classified information was revealed. That, as a matter of piety, is admirable. As a matter of substance, it isn’t – we already know that Flynn’s name being published in the media was a felony. The media gave us that fact. Why he’s hiding behind the generality of not divulging this information is difficult to understand now that the horses are out of the barn.

Gowdy doesn’t like any of it, and it’s riveting to watch him attempt to keep a lid on the mounting rage over the refusal to acknowledge that someone in the Deep State will be held to account for those leaks.

Make the time to watch this clip. You won’t regret it.